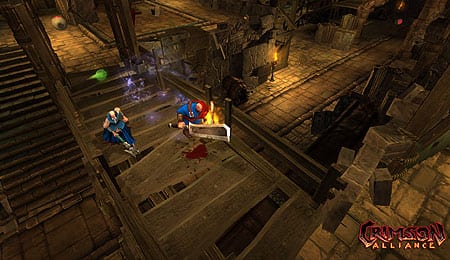 We know two’s company, but in Crimson Alliance four is a crowd.

During last month’s Summer of Arcade, Microsoft encouraged gamers to buy all five titles by dangling a free game in front of them. That carrot was Certain Affinity’s action-RPG Crimson Alliance, which features tried-and-true gameplay attached to a unique pricing structure — the game costs nothing to download (a la Pinball FX 2), but you’ll have to pony up to unlock the playable characters: 800 points gets you one while 1,200 nets you all three.

For such a conceptually simplistic hack-‘n-slash game, your fingers will be plenty busy. The face buttons control your three attacks (melee, ranged and stun) and an evasive move. Blocking is done with the right trigger while the left is used to pick up objects. A time-slowing special attack can be unleashed with the left bumper, and the right bumper deploys your consumable items (you switch between them via the d-pad). The right stick can be used to aim, though I found myself attacking in the direction I was facing about 99 per cent of the time.

It’s a quality effort to be sure, even if I would’ve preferred some control over the camera rather the ability to rotate my character independent of their movement. Also for the nitpicking file, I didn’t like having the bumpers cycle through my inventory (hitting “select” brings it up) as these are the only two buttons that command finite resources. If you’re in a rush, you can end up dropping a turret when you just wanted to check the stats on your new armour.

Adequately detailed and colourful in its representation of weapons and spell effects, Crimson Alliance has solid, if unremarkable, visuals. Characters glide smoothly through combat while the frame rate does an admirable job whether you choose to go it alone or team with three others online. There’s not a lot of variety to the environments, but what’s present is well laid out.

Easily the low point of the presentation is the voice acting. There isn’t a ton of it, however the game’s limited story is told via a series of still images with dialogue that is well below the industry standard even for a downloadable title. The effects and soundtrack are decent enough.

The story in Crimson Alliance has all the complexity of an RPG mad-lib: The realm of “Bazan” is under the tyrannical rule of “The Soul Siren,” and it’s up to the unlikely trio of “Moonshade,” “Direwolf” and “Gnox” to band together to bring an end to her reign of terror. And that’s about it. There’s a little more depth to it than that, just not much.

As I often write, however, the story of a hack-‘n-slash title takes a major back seat to the action, and that’s where Crimson Alliance does its best work. You start by selecting from one of the three character classes — Wizard, Assassin or Mercenary — and then dive right into all that glorious hacking and/or slashing through levels brimming with enemies aplenty.

At first blush it feels like the game can be successfully navigated by merely mashing on the melee and ranged attack buttons… and maybe it can. However, with no leveling or loot drops, the game offers scoring as the only viable way to compete with other players through an online leaderboard. And from that little nugget spawns a more tactical approach as you’re suddenly trying to not only kill everything in your path but also avoid getting hit.

That’s because the game has a highly unforgiving combo meter that dictates your multiplier. Each kill fills the meter, and while you can ascend to a 4 or 5x fairly quickly, it takes a lot of skill to max out at 8 because even a single blow knocks the meter down a full point.

Each level also contains a number of hidden areas loaded with gold, class-specific treasure chests, heart pieces that increase your health, soul anchors that improve your special attack and puzzles that may require multiple players to complete. Then at the end, all the points you scored during combat are added to bonuses for the amount of time it took you and the number of secret areas you found. That total awards you a bronze, silver or gold medal.

As noted, there are no experience points and enemies do not drop random items. Instead your character grows through the acquisition of increasingly powerful items that improve your stats in one of four areas. Some of these items can be found on the main levels and challenge stages, but you’ll notice that the most powerful ones are available for purchase at hefty prices.

Why is that significant? Because Crimson Alliance affords gamers the opportunity to trade 80 MS Points (US$1 US) for 40,000 pieces of in-game gold. Sure, you can absolutely earn the money through playing the game, but to outfit your character in five-star items you’re going to need to replay the game’s levels over and over again. So while I can’t say this definitively, it certainly feels like the progression system is in place at least partially to encourage you to drop a few extra bucks to get that sweet gear.

However, while you can bypass the micro transactions, you cannot get around the fact that there are a disappointingly limited number of enemy types. Crimson Alliance keeps the cast of foes pretty tight, and that level of repetition spills over to the combat where you’ll eventually find the most effective method to deal with Enemy X and will likely utilize it every time you encounter them. That can get dull.

One of the game’s primary selling points is the ability to join forces with up to three other players either locally or through Xbox Live. Unquestionably, multiplayer is a more fun and engaging way to play, but I found I had more fun in two- and three-player games. Adding a fourth player made the screen too busy for me, plus the camera’s decision to seemingly follow one person at random created situations where my character was essentially stuck in a corner until they were warped to rejoin the group.

While it lacks the depth and replay value of fellow action-RPG Torchlight, Crimson Alliance is still a fun game to play, especially if you’ve got a couple buddies to accompany you. Unless you’re truly planning to play all three characters extensively, though, I’d recommend going the 800-point route and just unlocking one playable class.

By Herija Green
This entry was posted on Saturday, September 10th, 2011 at 12:29 pm and is filed under Herija Green, Video Game Reviews. You can follow any responses to this entry through the RSS 2.0 feed. You can leave a response, or trackback from your own site.