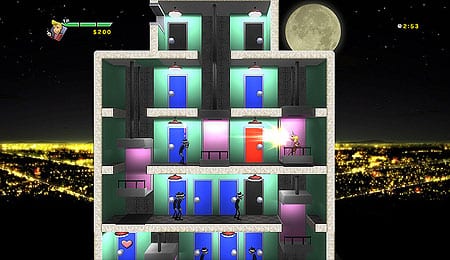 What did one elevator say to the other? I think I’m coming down with something.

Even as an adult with a family of my own I still have a certain affinity for games my dad enjoyed. That’s why titles like Pengo, Q-Bert, Ms. Pac-Man and Donkey Kong Jr. mean something to me — not because I played and enjoyed them myself, but because they meant something to him. At or near the top of that list is Taito’s Elevator Action. Thus when Square-Enix released Elevator Action Deluxe last week I was more than a little anxious to see how this retro classic fared in our high-def world.

There are two prominent problems with the controls in Elevator Action Deluxe. First, jumping just isn’t as responsive as it should be for a game in which the system of advancement is based on completing levels under a specified time. I won’t even venture a guess as to the number of times I went sprawling down an open elevator shaft instead of making a relatively modest jump to safety.

Second, and more annoying considering it was a design decision, both the square and circle buttons do the exact same things: shoot a weapon and/or melee an enemy. No big deal, right? Wrong. Many levels offer you the chance to carry an RPG launcher, which detonates on impact. Now let’s say you’re carrying said weapon and want to stealthily kill an enemy. So you sneak up and hit fire/melee when you’re right next to them… only you’re slightly (and undetectably) outside melee range, and instead of punching your enemy you fire a rocket that kills you both.

If we were still working with the two-button limitation of the original, it’d be understandable, but when you’ve got four face and four shoulder buttons available (and only three commands) I just don’t see the logic.

While not necessarily a visually impressive game, Elevator Action Deluxe does create a pleasing homage to the source material. The signature accoutrements of the arcade classic (such as doors using the same colour coding) are all represented along with plenty of new additions. Everything moves smoothly, and the updated cartoony style is a good fit.

When it comes to Elevator Action, there are two audio elements I remember vividly: the beginning when he shimmies down the rope and the basic tune that plays. I’m pleased to report both have been retained and updated, giving this title yet another well-implemented connection to the past. Like the visuals, there’s nothing that’s going to wow you, but it’s well done across the board.

OK, let’s just get this out of the way — a flimsy plotline about saving the world has been introduced, but outside of a couple text-driven scenes that bookend the game’s 50 levels, it’s a complete non-factor. That’s just as well, as a story in this type of arcade-inspired action puzzler is not just unnecessary, it’s unwelcome.

What is welcome is the care with which Elevator Action Deluxe mimics yet still builds upon its source material. You’re still a spy trying to access top secret material while traversing an increasingly complex series of elevators and escalators to reach the exit. Along the way you’ll shoot out lights, crush enemies under elevators and speed off in your little red convertible. Ah, nostalgia.

As noted, though, much has been added. For starters, you’re now able to acquire more powerful weapons such as machine guns, rocket launchers and bombs by entering blue doors marked with the corresponding symbol. Each item has a finite supply of ammunition, and should you be killed you’ll lose the use of it. Another notable change is that you can now take three bullets before dying, and your health meter can be recharged via doors marked with a heart.

Navigating the levels has also become more advanced as the traditional elevators and escalators are joined by a host of new devices, including ropes, shutters that slide up/down and levers that make segments of the floor disappear and reappear. The game does a nice job of adding more and more of these elements as you progress, and by the time you reach the final stage your skills should be finely honed in the ways of industrial espionage.

Not every stage requires you to collect secret data, though, as a new series of bombing missions have been added where you must set charges at specified points on a map before escaping the area. It’s a departure to be sure, but as with the rest of the game the developers never push the envelope so far that it stops feeling that a natural extension of the 1983 version of Elevator Action.

As much as I enjoyed most of Elevator Action Deluxe from a conceptual standpoint, there are a few areas I didn’t care for. Rope-centric missions tended to provide little fun, and I was always happy when I’d load a new stage and they weren’t present. The same can be said for the goons, which are massive enemies that chase you throughout a level and can only be stunned briefly via explosives or being slammed by a door.

The game’s aforementioned dicey controls will likely lead to the majority of your deaths, though thankfully the only penalty for dying is a loss of points at the end. That means the only way to fail a level is to have time expire. Each completed level rewards you with a bronze, silver or gold medal based on various criteria, and scoring a gold medal unlocks shots of previous Taito releases.

Beyond the 50-level campaign, Elevator Action Deluxe also offers co-operative and competitive multiplayer. Co-op simply allows up to four players to run the single-player levels together, while competitive matches put players in a race to acquire sensitive materials. There’s even a Deathmatch. Both modes are only available locally, however, with leaderboards representing the game’s lone online presence. As a bonus, the original Elevator Action is included with your download.

There is a lot to like in Elevator Action Deluxe, which is another in a line of impressive retro remakes that successfully straddle the line between reverence and advancement. Even with poor controls weighing it down this is still a game old school Elevator Action fans should enjoy.

By Herija Green
This entry was posted on Tuesday, September 6th, 2011 at 8:20 am and is filed under Herija Green, Video Game Reviews. You can follow any responses to this entry through the RSS 2.0 feed. You can leave a response, or trackback from your own site.