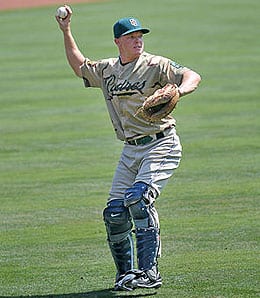 Nick Hundley is healthy… and raking.

In most Fantasy leagues the trade deadline has now come and gone so the waiver wire takes on added importance as we head into the final five weeks of the season. One of my worst pet peeves has always been the annual rite of summer known as the commencement of football draft season. Play the baseball season out. Is there anything worse than simply walking away from your baseball league and skewing the results for those making that run for the roses? I feel a rant just around the corner so let’s return to the topic at hand and get to this week’s Troll.

Nick Hundley, C, San Diego Padres (CBS: 17 per cent owned, Yahoo!: 8 per cent): Coming off a solid 2010, Hundley took over as the starter this year. After a solid April, he has endured a season from hell and has ended up on the DL not once, but twice, missing a total of nine weeks dealing with an oblique strain and elbow surgery. Since being activated August 12 Hundley is making up for lost time, going a mind-boggling 15-for-28 with two homers, five RBI, and eight runs scored. Get him active in all formats for the stretch run.

Orlando Hudson, 2B, San Diego Padres (CBS: 19 per cent owned, Yahoo!: 10 per cent): Hudson has very quietly been enjoying a rather productive August. He gets absolutely no respect as a Padre, but in his past 10 games he’s gone 13-for-34 with one homer, nine RBI, seven runs scored and one theft. The surprising Padres are showing an improved offense of late and the O-Dog is a big reason for that success.

Casper Wells, OF, Seattle Mariners (CBS: 7 per cent owned, Yahoo!: 5 per cent): The 26-year-old Friendly Ghost outfielder — acquired by the Mariners in the Doug Fister deal — has been on a tear. Casper’s five homers and 11 RBI in August, including homering in four consecutive games, should get your attention. What is even more amazing is that the long ball streak happened withing the pitcher-friendly confines of Safeco. Wells’ potential for solid power numbers down the stretch makes him a solid option in all formats.

Mike Minor, SP, Atlanta Braves (CBS: 30 per cent owned, Yahoo!: 8 per cent): Minor has now put together back-to-back wins including a stellar six-shutout inning performance against the feeble Giants’ offense in his last outing. Since being recalled August 6, the 23-year-old southpaw has struck out 20 while allowing only four free passes in 17 1/3 IP, a definite recipe for success. Tommy Hanson is still nursing a very wonky shoulder and is at least another week from returning. Minor has the Cubbies next on the schedule, which is not an easy matchup — especially the way Chicago has been mashing lately — but he could make for a decent speculative start.

Ben Revere, Minnesota Twins (CBS: 18 per cent owned, Yahoo!: 3 per cent): Denard Span has found his way back to the DL and is still dealing with the effects of his home plate collision with the Royals’ Brayan Pena at the beginning of June. The Twins will play it very safe and turn to Revere to bat at the top-of-the-order for probably the duration of 2011. Web gems don’t count in Fantasy, but Revere can help your team in other ways. In 303 at-bats, he has managed to steal 22 bags with 43 runs scored and will be an asset in those categories as the season winds down in the Twin Cities.

Juan Rivera, Los Angeles Dodgers (CBS: 10 per cent owned, Yahoo!: 3 per cent): After struggling horribly in Toronto, Rivera has found a new lease on life in Los Angeles. In August he’s hit one homer, driven in 13 runs, and hit for an outstanding .352 BA. Take the short-term counting stats and run with them.

Ryan Lavarnway, C, Boston Red Sox (CBS: 8 per cent owned, Yahoo!: unowned): Kevin Youkilis is on the DL with lower back discomfort. David Ortiz hasn’t played since last Sunday and is probably at least a week away from returning while dealing with right heel bursitis. The BoSox have turned to Lavarnway, 24, to help fill the void. In two levels at the minors in 417 at-bats he mashed 30 homers with 85 RBI and a solid .293 BA. He’s going to be filling the DH role until the walking wounded return but the catcher eligibility makes him an intriguing option in both two-catcher and AL-only leagues. It’s also time for another look at Jed Lowrie, who is seeing plenty of action at the hot corner with Youk out.

Bobby Parnell, RP, New York Mets (CBS: 24 per cent owned, Yahoo!: 12 per cent): Now that Jason Isringhausen has got his 300th career save save under his belt it’s time to see what the future has in store for closer-in-waiting Parnell. Saturday, Isringhausen imploded against the Brewers probably hastening the transition to the hard-tossing Parnell. The Mets will give him a good look down the stretch as they make plans for the 2012 season.

Trevor Bauer, SP, Arizona Diamondbacks (CBS: 6 per cent owned, Yahoo!: NA): The Diamondbacks’ first pick in this year’s June draft (third overall) has been everything he was advertised to be. In 19 IP spread between High-A and Double-A, he’s allowed 15 hits and eight walks while striking out 33 and posting a great 2.84 ERA. The odds are high that we get our first look at the young phenom pitching out of the Arizona bullpen before season’s end. Buying in now while the cost is relatively cheap is a prudent move in all keeper formats.

Mike Gonzalez, RP, Baltimore Orioles (CBS: 1 per cent owned, Yahoo!: unowned): Kevin Gregg has been simply abysmal lately, allowing eight earned runs in his last four outings. Jim Johnson, arguably the best relief pitcher in the Baltimore pen, is being groomed for a role in the rotation and could see some starts down the stretch. Is Gonzalez currently the best option for saves in Baltimore? He hasn’t allowed a run since July 18, a string of 10 outings in which he’s given up a scant four hits and one walk. As crazy as it would appear, don’t rule this option out.

Jeremy Affeldt, RP, San Francisco Giants (CBS: 4 per cent owned, Yahoo!): The elbow woe faced by Brian Wilson is likely to send him to the DL and Affeldt is first in line to garner save opportunities for the Giants. This is, of course, assuming the Giants’ pathetic offense actually scores enough runs to allow for save chances.

Sean Marshall, RP, Chicago Cubs (CBS: 12 per cent owned, Yahoo!: 17 per cent): Carlos Marmol’s velocity is down and he has shown a penchant to implode, but for now he still has the ninth inning gig for the Cubbies. Marshall is enjoying a great year in Chicago and is a solid option for those looking to protect both the ERA and WHIP categories and provide some vulture win and save opportunities down the stretch.

By Tim McLeod
Tags: Nick Hundley
This entry was posted on Sunday, August 21st, 2011 at 1:09 pm and is filed under BASEBALL, The Wire Troll, Tim McLeod. You can follow any responses to this entry through the RSS 2.0 feed. Both comments and pings are currently closed.