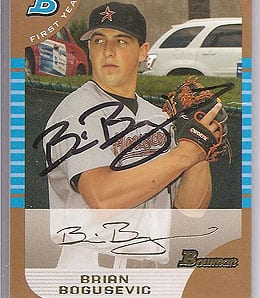 Pitcher turned hitter Brian Bogusevic is turning some heads with his play.

While the Astros continue to flounder and trot out an array of virtual unknowns, the occasional player is providing sneaky value on their roster.

One such hitter is outfielder Brian Bogusevic, who had homered twice in three games (including a walk-off pinch-hit grand slam on Wednesday) before taking a seat with Houston facing lefties on Saturday and Sunday.

Early last season, we didn’t think Bogusevic would ever become more than a bench player, but then again, it was difficult to imagine the Astros completely gutting their team.

The 27-year-old converted pitcher didn’t exactly tear it up at Triple-A, and he can’t hit lefties to save his life, which relegates him to a fourth outfielder at best, but the speed is intriguing.

The final few weeks of this season are very important for Bogusevic if he’s going to play a bigger role on this team next season, so he may be worth taking a flier on in deeper NL-only leagues to see what he’s capable of down the stretch, especially considering his recent flash of extra-base pop. As we’ve mentioned in the past, he’s no Rick Ankiel, but he could be Ankiel Lite with speed, and that might be a useful asset.

By RotoRob
This entry was posted on Monday, August 22nd, 2011 at 7:55 am and is filed under BASEBALL, MLB Today, RotoRob. You can follow any responses to this entry through the RSS 2.0 feed. You can skip to the end and leave a response. Pinging is currently not allowed.