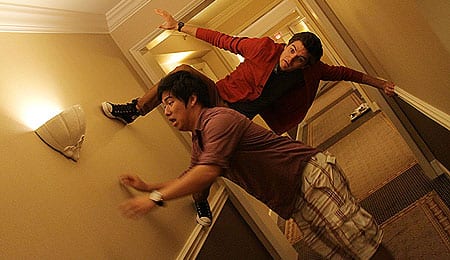 Nolan, best known for his work on a couple of the Batman movies, Memento and Inception, appropriately picked the Canadian Film Centre to receive the $100,000 donation from WIND, given to the charity of choice for all the celebrities that agree to participate.

Holliday, a Vancouver resident, made an unbelievable video for his entry and it wowed the judges (even though it had nothing to do with sports!). Here’s his entry, which is well worth a look if you haven’t seen it.

“I am honoured that Ian chose to have a conversation with me,” said Nolan. “I wish Ian the best of luck heading into this industry and hope our conversation provided him with some useful information to make breaking through easier.”

As with the previous winners, I was allowed to do a quick Q & A with Ian, but this time spent more time focusing on film rather than sports (huh?). Yes, RotoRob has other interests. I know… it’s shocking.

RotoRob: What surprised you most about Christopher?

Ian Holliday: What surprised me most about Christopher was how relaxed he was with us! In interviews he is always very professional, he answers questions efficiently and fully, and then waits for the next question. With us he was very personable and friendly, which was just incredible!

RR: What would you have liked to ask him but didn’t get a chance to?

IH: If we had an infinite amount of time to talk with Mr. Nolan, we would have asked more about how he works with actors, and how he worked through some conflicts he had with actors.

IH: Both directors deserve their reputations, but I would say Kubrick because he worked hard to change and challenge the format of film, and while David Lynch plays extensively with plot, he works within the format, never revolutionizing the game. Kubrick is more of a visionary, single-handedly altering the way film is used with each of his works.

RR: What are your three desert island DVDs and why?

IH: Inception – because a part of me would like to think this whole thing is just a dream; 2001: A Space Odyssey – because space is the only thing I have to look at besides the island, I’d like to think what’s up there; and Children of Men – because the hope of a ship full of scientists in the horizon might just keep me going.

RR: What’s up with the “chill” Vancouverites rioting after the Stanley Cup Finals?

IH: The hockey game loss was not the cause of the riots. People don’t sift through racks of clothing to find the best stuff to steal, or empty cash registers into bags, out of anger over a sports game. Those sorts of actions are not emotionally motivated, they are actions of people who want to steal, want to be violent in public, and find it fun to hurt people. People like that exist everywhere, and it’s sad that they used the hockey game as an excuse and as fuel to create something so out of control. It only takes a few to start something like that, and I don’t feel that it represents the city of Vancouver as a whole.

By RotoRob
This entry was posted on Thursday, August 18th, 2011 at 9:42 am and is filed under Contests, RotoRob. You can follow any responses to this entry through the RSS 2.0 feed. You can leave a response, or trackback from your own site.