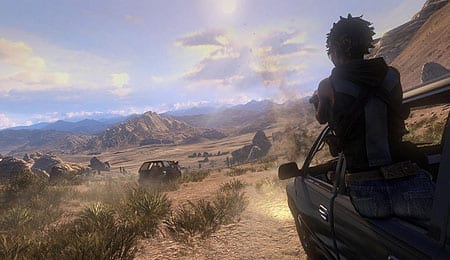 The game’s many scripted car chases don’t offer up much fun.

Although the first two installments of Call of Juarez took place back in the old West — which offered gamers a different backdrop for a first-person shooter — Ubisoft’s recently released Call of Juarez: The Cartel brings the series into modern times. However, while the prospect of a gritty crime shooter set against the Mexican cartels is intriguing, the final product fails to reach its potential.

It may take a little time to acclimate to the game’s button layout, but once that’s squared away the actual shooting mechanics are solid. You’ll carry three guns (two pistols and a rifle/shotgun) and have the ability to dual-wield your two smaller weapons with the usual drawback of not being able to aim down the sight. Grenades and melee attacks are also available.

On the downside there are some really awkward hand-to-hand fighting segments peppered throughout the campaign thanks to a camera that makes it look like you’re punching with your head. Driving isn’t much fun, either. The view from the driver’s seat isn’t conducive to fast-paced maneuvering, and the game rarely puts you in a spot to do anything other than trail a fleeing vehicle and get shot at.

Viewed as a series of screenshots, Call of Juarez: The Cartel isn’t a bad looking game. Put all of the parts in motion, though, and there are problems, the most notable of which is the amount of clipping that the characters do through objects. Plow into a gang banger with your car and watch him practically enter your vehicle like one of those freaky albino brothers from the second Matrix film. Turn around to see one of your partners with their entire lower body through the floor… and then watch as they magically materialize a few moments later in front of you.

In contrast to that ugliness is some legitimately cool settings, highlighted by an all-too-short gunfight through a graveyard south of the border. It just feels like with a little more polish things could’ve been a lot smoother visually, but as constituted it’s an underwhelming effort.

Voice acting in The Cartel is mediocre at best. The three main characters (Eddie Guerra, Kimberly Evans and Ben McCall) come off far too much like caricatures than actual living, breathing people. There’s plenty of bravado and tough (profane) talk, but there’s no range or subtly and it really undermines any emotional attachment that might’ve been made with the story. Conversely, the music is quite good with an appropriately Western vibe.

Mexico’s dreaded Mendoza Cartel is out of control, and its decision to bomb the DEA offices in Los Angeles has officially escalated the tensions between the United States and Mexico. In response, the U.S. government commissions the creation of an inter-agency taskforce made up of agents from the FBI (Evans), DEA (Guerra) and LAPD (McCall). Its mission: stir shit up and find a way to bring the Mendoza Cartel down.

Now, while that isn’t the most original storyline you’ll find this year, it’s still got enough elements to make for a pretty kick ass game. Unfortunately, much of that potential gets lost amid unlikable characters and a first-person shooter setup that recycles its tricks too liberally.

Let’s start with the character dynamic. The three protagonists, who are together for basically the entire game, don’t like one another — a theme that never, ever changes. And after a while all the verbal sniping about who’s corrupt and who sold who out eats away any hope of sympathizing with (much less liking) any of them. So despite traveling together down a road filled with dozens of dangerous shootouts and narrow escapes there’s no evolution of the relationships.

As for the action, the game is at its best when bullets are flying fast and furious. Each kill helps fill a meter in the corner of the screen and once you reach 100 per cent you can activate “concentration” mode, which slows down time and allows you to wade through groups of enemies (think of it like a first-person Max Payne). Shooting enemies is pretty satisfying, and there are enough different types of guns to keep this aspect of the game reasonably fresh throughout.

Call of Juarez: The Cartel also trots out a number of different gimmicks to vary things, though these meet with less success. Team Entry (AKA breaching) has you and a partner kick down doors and open fire in slow motion. It’s fun, but like Team Cover, where you have to sprint to cover points before killing entrenched enemies, it’s overused.

At least there’s some enjoyment to be had there, though, as opposed to the driving segments that are both too plentiful and largely devoid of fun. That’s because when you’re behind the wheel it seems like all you can do is follow other cars and get shot at. There’s no evasive or offensive driving, and unless you’re the passenger you never get to squeeze off a single round. The hand-to-hand combat sections are also rough, but there are too few of them to care much about it.

To its credit, The Cartel offers a lengthy 15-chapter campaign, which is playable either alone or co-operatively as any of the three characters. And based on who you select you’ll get a different take on the story as a whole. In addition to the main storyline, there are also hidden agendas for your character to covertly accomplish — do these successfully and you’ll earn experience points that unlock additional weapons as you progress.

Competitive multiplayer is also available via the tried-and-true Cops and Robbers formula. I had a decent enough time running around online and shooting people, but with a handful of modes and just four maps available it’s hard to imagine it having legs.

At the end of the day, Call of Juarez: The Cartel is a decent shooter that’s been weighed down by a trio of unlikable main characters and too much repetition in the campaign.

By Herija Green
This entry was posted on Saturday, August 20th, 2011 at 11:27 am and is filed under Herija Green, Video Game Reviews. You can follow any responses to this entry through the RSS 2.0 feed. You can leave a response, or trackback from your own site.