Henry Sosa Looks to Build on his Debut 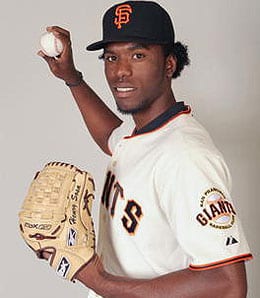 New Astro Henry Sosa is getting a baptism by fire.

It wasn’t the worst debut we’ve seen, and we’ll cut him some slack as it came against the red-hot Diamondbacks.

On Monday, Houston fans will get their first look at Sosa when takes the bump again in the series opener against the Cubs. At this point, the 26-year-old is only someone to watch, but given the progress he’s made this season, he could emerge with value.

The Giants started converting him to relief last year and at the beginning of the season he looked lost in the bullpen of Triple-A Fresno. Sosa was sent down to Double-A, where he got to start again, and he was superb.

Then came the deal to the Houston organization on July 19.

He stayed in Double-A for a few starts and continued to pitch well before Houston bumped him back up to Triple-A.

After just one start at Triple-A Oklahoma City (mind you, it was a gem – seven shutout innings), Sosa found himself up in Houston, playing for a Triple-A team that’s masquerading as a major league squad.

Sosa can bring the heat (his fastball ranges from 92 to 96 mph), but may lack the secondary offerings to be a starter long-term.

Sosa turned 26 last month, so there’s not a ton of upside here. He’s been given an opportunity because J.A. Happ has been, well… hapless, and the fact is right now Houston is throwing everything at the wall and seeing what sticks as it tries to sort of how to proceed in 2012.

If you’re absolutely desperate for pitching in a, say, 20-team NL-only league, feel free to roll the dice on Sosa. Otherwise, just and watch and see how things play out for now.

By RotoRob
Tags: Henry Sosa, Houston Astros
This entry was posted on Monday, August 15th, 2011 at 10:34 am and is filed under BASEBALL, RotoRob, Scouting Report. You can follow any responses to this entry through the RSS 2.0 feed. Both comments and pings are currently closed.