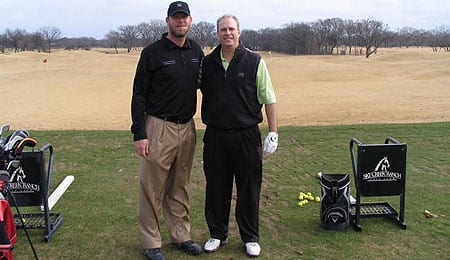 If Kevin Millwood (left) doesn’t get his act together, he’ll be spending a lot more time at the golf course.

We all expected it to happen last year, but Adam Jones wasn’t quite ready to enjoy his breakout season. After the disappointment that was 2010, we dropped Jones out of the top 35 when we ranked the outfield position heading into this year.

Okay, Jones has been ice cold lately (0-for-12 in the last three, but at least he delivered his 70th RBI Tuesday), however, he’s coming off a fine July (.320, five homers) which followed an impressive June (seven homers) and a pretty sweet May (.343, 15 RBI). It all adds up to top 15 value at his position as the just turned 26-year-old is beginning to scratch the surface of the uber talent we’ve all believed he has. And thanks to Baltimore’s woeful play, Jones’ fine season has pretty much been lost in the shuffle.

The O’s have 49 games to play and their budding star centrefielder has already set a new personal high in homers and matched his best in RBI and steals while his current BA would top last year’s .284 as a new high water mark.

This much is sure: you can bet your ass you will be calling Jones’ name a hell of a lot earlier at the 2012 draft, as the way things are going, we’re talking about a third rounder at this stage.

Conversely, one position player that has not lived up to our expectations has been White Sox shortstop Alexei Ramirez. We thought he’d be a top five shortstop, but he’s barely been a legitimate starting option in standard-sized leagues.

In fairness, it’s not that Ramirez has completely tanked (although his overall numbers sure look lousy without that big May); it’s more a case of him being passed by several surprise performers. Who the hell saw this type of breakout coming from Asdrubal Cabrera? Jimmy Rollins is a player many of us had almost written off, but he’s having somewhat of a renaissance season. And youngster Starlin Castro has taken a bigger step forward than most of us expected.

Meanwhile, Ramirez has just not been that good a hitter since May. In fact, he has even started popping up on the wire in some extremely shallow leagues. Ramirez is 0-for-8 so far in this series against the Orioles, although at least he had a walk, steal and run on Tuesday. But the dude is down to .200 for August after hitting just .220 in July with only nine runs and a substandard 626 OPS.

The stolen base Tuesday was just Ramirez’s fifth of the season, another disappointing trend for a player that has consistently managed low teen swipes. He’s hitting more fly balls, but it’s not translating into more home runs; his walk rate has bounced back this year, but it hasn’t resulted in an increase in BA. That’s part of the frustration for Ramirez owners this year: his peripherals suggest some improvement, but it hasn’t played out that way in his bottom line results.

Despite their precarious pitching situation, the Yankees took a pass on him; Boston, with its battered rotation, never turned to him. Yet things are so desperate in Colorado that recently signed veteran Kevin Millwood will start for the Rockies on Wednesday.

We actually thought Millwood, a free agent heading into the season, was still potentially useful enough to rank among our pre-season top 120 starting pitchers rankings, but he hasn’t had a sniff of the majors.

What a long, strange trip the 2011 season has been for Millwood. He was signed to a minor league deal by the Yankees in late-March, part of their throw-a-bunch-of-darts-at-the-wall-and-see-if-we-can-build-a-rotation strategy.

With reports emerging that velocity was way down during extended Spring Training, there didn’t seem much hope.

Millwood started the year in the minors, throwing a one-hit shutout in his only start at Double-A before pitching well in his debut at Triple-A Scranton/Wilkes-Barre and then getting rocked in his second start. He opted out of his deal on May 1, as was his right if the Yanks hadn’t called him up, but even they weren’t that desperate for pitching.

The O’s were reportedly interested in bringing him back, although I’m not really sure why considering how crap he was with them last year. The Angels and Cubs were apparently taking a look at Millwood as well, although it was the Red Sox that penned him to a minor league deal in mid-May. He made 13 starts for Triple-A Pawtucket, and looked a bit better, prompting talk that the BoSox would give him a shot at some point, but when that didn’t happen, Millwood got frustrated and walked away from the team and was subsequently released by Boston.

The very next day, Colorado signed him to a minor league deal and now, two days later, he’s about to make his 2011 MLB debut in Cincinnati. Should you gamble on him? Um, that depends. If you are the type of person who extracts pleasure from having your thumbs squeezed in a vice or like the feeling of bamboo shoots wedged under your fingernails, then yes, by all means, pick Millwood up and start him. Otherwise, steer clear for now. He’s got a lot to prove before we’re ready to talk him up.

By RotoRob
This entry was posted on Wednesday, August 10th, 2011 at 12:16 pm and is filed under BASEBALL, MLB Today, RotoRob. You can follow any responses to this entry through the RSS 2.0 feed. You can leave a response, or trackback from your own site.