Video Game Review: Back To The Future — Episode 2, Get Tannen! 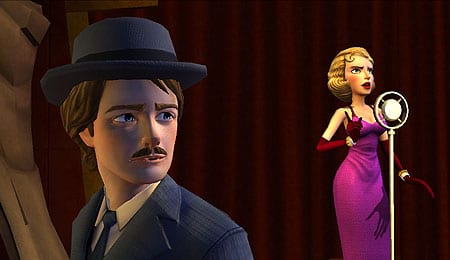 This speakeasy is one of the few new locations in Episode 2.

When we last left Marty McFly and Doc Brown at the end of Back To The Future: Episode 1, It’s About Time, Marty helped Doc escape from the nefarious Kid Tannen (who obviously wound up in a pile of manure), but because of unforeseen complications, Marty McFly’s timeline had been compromised. And in true Back To The Future fashion, the game ended with a To Be Continued cliffhanger as Marty started to fade from existence.

Episode 2: Get Tannen of Tell Tale’s Back To The Future series picks up right where the first game left off. However, the big question isn’t whether Doc and Marty are all right; it’s whether Tell Tale fixed the problems with the first game.

Get Tannen features the standard control set for Tell Tale games. The analog stick moves Marty around the screen while the trigger buttons cycle through objects and people that can be interacted with. Optional Objective and Hint buttons are available for players that get frustrated by the game’s puzzles.

Episode 1 was filled with clunky controls — something that generally can’t be overcome in adventure games but it’s never enjoyable. Unfortunately, Get Tannen seems to have layered some bugs on top of the clunky controls. During several visits to Hill Valley’s town square, I found Marty appear to be running while he slowly moved backwards. Other times, the camera couldn’t decide which direction it wanted to show, and even when it did point in the right direction, the controller’s axis wasn’t synced up with the camera angle and it took a few seconds to correct itself.

All of this is passable in a game that’s more about thinking than moving, but it’s still a pain to deal with.

Remember, Tell Tale’s episodic adventure games are released across platforms. That means that you’re not getting realistic high-polygon graphics. Instead, you’re getting stylized art optimized to be ported across consoles and adventure gamer PCs. There’s no noticeable improvement or change between this game and the previous episode. The same engine and the same character models are used. That’s to be expected, but it is disappointing that much of the game takes place in and around the same locations. If you took screen captures of both episodes, you wouldn’t notice a difference.

This is different from most of Tell Tale’s other episodic adventures, as most have a different setting from episode to episode. Instead, all of the good and bad of the first episode have carried over: the graphics are acceptable for the genre and platform, and they’re accurate cartoon representations of Christopher Lloyd and Michael J. Fox.

If there is a graphical difference, it’s that the in-game camera seems to be more fickle compared to the first game. Angles and obstructions make it difficult to get the full view sometimes, which is particularly frustrating when you’re trying to figure out a particular puzzle.

The good news is that the voice acting and music have carried over from the first game. Tell Tale always nabs stellar voice work, and Back To The Future includes Lloyd reprising his role while A.J. LoCascio continues to do the most uncanny Fox impersonation you’ve ever heard. Music is lifted directly from the films, and original compositions are written to stay consistent with existing themes.

Despite its technical difficulties, Back To The Future: Episode 1 was an enjoyable visit with characters we all know and love. The storyline fit perfectly with the film franchise and the stellar voice acting charmed anyone that had seen the films, despite the somewhat easy game puzzle.

I was hoping that Episode 1’s faults came merely as a series introduction, but they’ve actually been propagated into Episode 2. Adventure games are all about solving puzzles, but these puzzles aren’t terribly challenging. Seasoned adventure gamers will blow through this in 2-to-3 hours, and perhaps Tell Tale simplified the series episodes because of the franchise’s mainstream appeal. It’s disappointing, though; despite a good story and good voice acting, it sometimes feels like the actual game design lacked substance. The technical bugs described above didn’t help.

The bottom line is this: If you like the Back To The Future movies and/or adventure games, you’ll enjoy Get Tannen. However, it’s not going to win any awards for design or technical achievement. The series so far has been pleasant but slightly disappointing… kind of like Back To The Future Part 3.

However, the cliffhanger leading into Episode 3 looks to be a dandy. Let’s hope Tell Tale has raised its proverbial game for that one.

By Mike Chen
Tags: Video Game Review
This entry was posted on Saturday, April 16th, 2011 at 1:51 pm and is filed under Mike Chen, Video Game Reviews. You can follow any responses to this entry through the RSS 2.0 feed. Both comments and pings are currently closed.