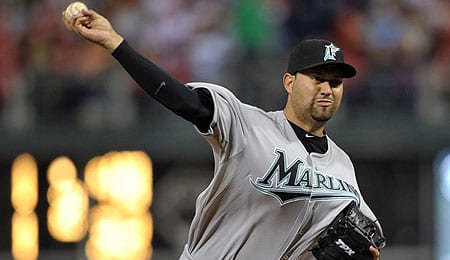 Edward Mujica has become one of the top non-closing relievers to own.

Heading into the season, we did not rank Marlin reliever Edward Mujica among the top 89 Fantasy relief options, although we did acknowledge that he was a dark horse for saves in Florida should Leo Nunez prove shaky as he did near the end of 2010. Well, Nunez hasn’t exactly been lights out, but Mujica has been unable to work himself into the mix for saves.

Still, he’s enjoying a very strong campaign, worthy of attention in deeper NL-only leagues. In fact, Mujica has probably performed at a top 50 level among relief pitchers this season, shaking off a rough April with three splendid months since. His command has again been off the charts, and just take a peek at his WHIP and try to tell me that wouldn’t be useful. Throw in a whopping eight wins and you’ve got yourself a very fine non-closing Fantasy reliever.

It will be very interesting to see if the Fish cough up the money needed to keep the arbitration-eligible Nunez for 2012 or opt to see what Mujica can do as a closer. It’s definitely something to watch this offseason.

Ryan Webb, like Mujica part of the Cameron Maybin deal from San Diego, is another Marlin reliever we thought could sneak into the mix for saves pending a Nunez blowout. And he’s a name we did include in the top 89, although barely. However, ineffectiveness and injury have rendered Webb quite useless this season. He’s been out since late-June with a shoulder injury and finally threw from the mound last week for the first time since landing on the DL.

He was being worked hard before the injury, which was obviously a factor in him getting hurt in the first place. Webb is likely to return to active duty within the next couple of weeks, but he’s slipped in the depth chart and is highly unlikely to offer value in any format this year. However, we really liked what he brought to the table with the Padres last year, and at the age of 25, we’re sure Webb will emerge as a Fantasy factor at some point.

By RotoRob
This entry was posted on Wednesday, August 3rd, 2011 at 8:14 pm and is filed under BASEBALL, MLB Today, RotoRob. You can follow any responses to this entry through the RSS 2.0 feed. You can leave a response, or trackback from your own site.