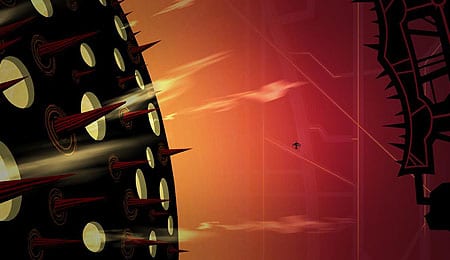 I don’t remember seeing that in the Insanely Twisted travel brochure.

When this year’s Xbox Live Summer of Arcade launched with Bastion, I made note of some of the true standout titles that were introduced to gamers during past versions of the promotion. Well, after playing through Insanely Twisted Shadow Planet, Fuel Cell Games’ first release, it’s time for that group to welcome its newest member.

Guiding your ship with the left stick and aiming with the right is very smooth, though it may take a little time to become accustomed to the pace at which you fire. The bumpers bring up a radial menu with your selection of tools, four of which can be mapped to the face buttons for quickly toggling between the ones you’re using the most. About the only issue is that you may occasionally select the wrong tool in the heat of the moment, but it’s a minor annoyance at worst.

Although there are sure to be Limbo comparisons aplenty, Insanely Twisted Shadow Planet is much more visually enthralling — in fact, I can’t remember the last time I was so anxious to explore every square inch of a game’s world. The environments boast an incredible mixture of free-flowing organic life juxtaposed with sharp, angular architecture. Artist Michel Gagne also did a fantastic job of blending in just the right amount of colour to create sharp contrasts against the game’s heavy use of black. This may be the best looking Xbox Live Arcade game to date, and it’s certainly the most interesting.

Subdued would be the best word to describe the game’s audio. The soundtrack is very mellow, while the in-game sound effects are distinctive. There’s no way it could’ve matched the incredible graphical presentation, and it’s smart enough not to try, instead blending into the background and allowing you to enjoy your surroundings.

There is almost no story to be found in Insanely Twisted Shadow Planet outside of a handful of brief cut scenes and some collectible “artifact” clips, which depict a meteor containing the shadowy virus striking your solar system’s sun and turning it all twisted and insane. You, as a tiny alien piloting a UFO, must investigate and destroy this anomaly.

Despite the lack of platforming there are definitely strong elements of games like Metroid (or Shadow Complex for the newer crowd) at work here. You start off piloting a tiny ship equipped only with a sensor, which is used to determine which of your other tools will be effective in eliminating whatever obstacle is in your path. As such, you’ll encounter plenty of areas that are blocked off by items you haven’t found, yet, meaning backtracking is a necessary part of gameplay.

Also familiar is the colour-coded map broken into five sections, which represent the distinctly different environments you’ll traverse during the game. Each time you encounter a door that requires a specific tool to pass, it will be marked on your map, making for easy reminders about which areas you can return to as you find more tools.

As noted, you’ll open with merely a scanner, but over the course of the game you’ll find seven additional items you can use, including a basic upgradable blaster, remote control missiles (you steer them with the right stick), a tractor beam, buzz saw and more. Each tool has a specific usage, but there are also plenty of instances when multiple options are available — primarily when dealing with enemies — so nothing becomes obsolete, and it rarely feels like you’re being pigeonholed into using an item in a specific situation.

Enemy diversity is another area of strength for Insanely Twisted Shadow Planet, with each of the five environments containing unique foes as opposed to recycled ones with a fresh coat of paint. That amount of variety combined with the lack of an overpowered weapon keeps combat lively from start to finish. On top of that, each section contains a boss fight that will test your skills in all the right ways (read: no cheap spamming attacks).

Beyond combat and exploration there are also some puzzle solving elements. Much of it is familiar, such as redirecting laser beams to hit a focus point, though there some unique moments when you alter the game’s horizontal and vertical perspective. There’s nothing particularly mind bending, but they’re well constructed and can involve some trial and error to complete.

Even with all the back tracking I never felt like the campaign dragged, which is due in equal measure to the diversity of the gameplay and sheer beauty of the graphics. It’s not what I’d consider a long game, but I’m the kind of person that would rather be treated to five or six excellent hours than a dozen mediocre ones. Still, replay value is one of the game’s only potential shortcomings as once you’re done your only two options are to start over or reload your final save and explore.

Insanely Twisted Shadow Planet also features a multiplayer mode called “Lantern Run,” which tasks you (and up to three other players locally or online) to advance a lantern as far as you can. You’ll be pursued by a massive enemy the entire time and must balance dodging and engaging foes as you cannot fire while gripping the lantern. It’s fairly enjoyable with multiple people, though you’ll feel underpowered if you’ve already completed the campaign.

From the incredible art style to the stellar gameplay, Insanely Twisted Shadow Planet absolutely crushes it. The only real knock is that the ride can be over too quickly, but it’s definitely one worth taking.

By Herija Green
This entry was posted on Tuesday, August 2nd, 2011 at 12:02 pm and is filed under Herija Green, Video Game Reviews. You can follow any responses to this entry through the RSS 2.0 feed. You can skip to the end and leave a response. Pinging is currently not allowed.