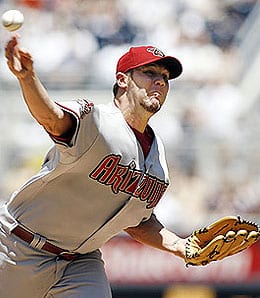 Micah Owings could suddenly be a Fantasy factor again.

It’s been quite some time since Micah Owings was a Fantasy factor. In fact, you’d have to go back to 2008 to find the last time he had any value, but by August of that year, things were already going downhill. Owings was slightly better in 2009, but last year – pitching strictly out of the bullpen – he was awful.

Now all of a sudden, he’s re-emerged with value for the D-Backs. Owings has mostly been a long reliever this year, but he looked really strong in his start last Sunday, earning himself the fifth starter job in Arizona for the time being. Saturday Owings gets the Dodgers – a really good match up, especially in LA where the Dodgers have been unable to generate any offense this year.

Looking for a decent spot start? Give Owings a shot. This could be his last chance to stick as a starter in the bigs, so you know he’s super motivated. That’s worth gambling on in our books.

By RotoRob
This entry was posted on Saturday, July 30th, 2011 at 1:05 pm and is filed under BASEBALL, MLB Today, RotoRob. You can follow any responses to this entry through the RSS 2.0 feed. You can skip to the end and leave a response. Pinging is currently not allowed.