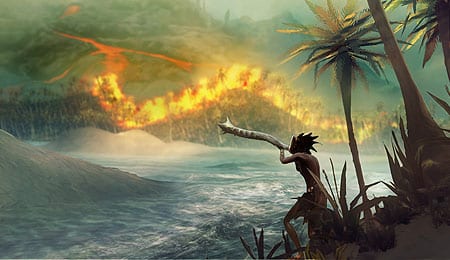 I don’t think spitwads are going to cut it this time.

With Bastion firing a strong opening salvo to begin the Summer of Arcade, the attention now turns to Ubisoft’s From Dust to keep the momentum rolling. Even at a glance you can tell the game is off the beaten path, but does that uniqueness come at the price of engaging gameplay? Read on.

In your role as a semi-omnipotent being, you control a cursor representing “the Breath.” You’ll primarily be scooping up elements (left trigger) from one area and depositing them elsewhere (right), which while simple is fundamentally awkward without the use of a mouse. It’s tough to be precise, due in no small part to a camera that never gets all that close to the world you’re attempting to craft. Beyond the basics, you also gain access to a handful of special powers as you progress that can be utilized via the d-pad.

Although From Dust features basic, primitive landscapes, they look really good, particularly the exquisite liquid physics. Whether it’s the rise and fall of waves or lava snaking its way down a mountain, it’s a site to behold. You’re given the freedom to shape locations in different ways, although the aforementioned lack of precision limits that to some degree. Still, molding the land and watching it fill in with vegetation and animal life as your tribe expands is enjoyable from start to finish.

Volcanoes boom and waves crash, but the audio is largely a quiet, peaceful affair. About the only annoyance is the hollering of the tribe. It becomes grating after a while, especially when they’re calling for help in a situation where a viable route is readily available.

Calling From Dust a “God game” isn’t entirely accurate, as although you have the power to manipulate earth, fire and water, you’ve got fairly strict limitations. Instead, From Dust is more about problem solving and intelligent planning with each level putting a series of obstacles between the tribe and advancement that you must help it overcome.

Things start off simple enough: the tribe has to go from Point A to Point B, and you must shift the elements to allow it safe passage. It gets tougher in a hurry, though, as things like natural disasters and rising/falling tides are introduced, which effectively takes the game’s outward appearance of being laid back and throws it out the window.

That said, From Dust does a nice job of increasing the difficulty gradually, introducing new elements piecemeal rather than simply leaving you to sink or swim. It seemed like the first six or seven levels each brought something new to the table in regards to gameplay — for instance, one level adds the ability to turn water into jelly (allowing you to literally part bodies of water Moses style) while another incorporates trees that periodically set themselves (and things around them) ablaze, which you can uproot and plant elsewhere.

Even with all these new wrinkles, though, the majority of the game will still be spent picking up materials from one area and transporting them to another. As such, there is going to be a certain segment of the gaming populous that will find this on the boring side. Even I, an unabashed lover of cerebral affairs like turn-based strategy titles, found that things could become tedious.

Far worse than the repetitiveness of hauling elements, though, is the controller-wringing frustration that the computer-guided natives can induce. As “the Breath” your only interaction with the tribesmen is to select a totem and press “A.” Then, prepare to hold your own breath as you hope that the people will follow the safe path you’ve created for them rather than some meandering route that takes twice as long or, worse yet, one that leads them to an obstacle that you hadn’t even begun to account for.

That type of A.I. is annoying at the best of times, but when it causes a village to be destroyed or a level to be failed it’s tough to stomach. Beyond these general difficulties, you’ll also see natives stop mid-journey and allow an element you were holding at bay with your powers to kill them. Or, my personal favourite, the villager that stands 20 feet from the totem when four have arrived (you need to five to activate them) for 90 seconds before finally sauntering over and creating the new village. In those situations you literally have no discourse other than to cancel instructions, re-issue them and hope they get the hint this time.

This disconnect from the world is felt in other areas of the game as well where the growth and evolution of your created lands must effectively be their own reward. Yes, if you cover enough area in vegetation animals will appear… but to no end. Your tribesmen don’t hunt them to expand their own territory. Small animals don’t beget larger ones. At the end of the day, reaching the requisite totems and moving on to the next set of challenges are all that really matter.

Despite those limitations, From Dust remains eminently enjoyable and packs a surprising amount of content. Beyond a fairly lengthy story mode, 30 challenges also become available as you play through the main game. The challenge levels range from very simple to quite difficult and are much shorter with more focused objectives. As long as you’re willing to roll with the trial-and-error nature of the game and not seek walkthroughs on YouTube you should get better than 10 hours of gameplay out of it.

From Dust offers a very streamlined package from graphics to gameplay. It could’ve benefitted from better A.I. and more variety, but there’s enough here to warrant a 1,200-point purchase.

By Herija Green
This entry was posted on Friday, July 29th, 2011 at 1:42 pm and is filed under Herija Green, Video Game Reviews. You can follow any responses to this entry through the RSS 2.0 feed. You can skip to the end and leave a response. Pinging is currently not allowed.