Minor Matters: Brad Peacock is on the Doorstep of the Majors 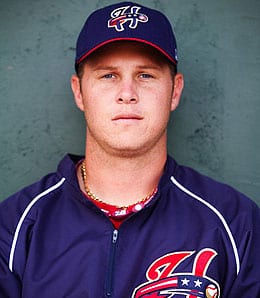 Brad Peacock has arrived as a bona fide pitching prospect.

Prospect hunters have no doubt started to put Washington Nationals youngster Brad Peacock on their watch list, as the 23-year-old right-handed starter simply blazed through Double-A, and hasn’t skipped a beat since arriving at Triple-A a couple of weeks ago.

On Wednesday, in just his third start for Triple-A Syracuse, Peacock took a no-hitter into the eighth inning, winding up with seven shutout frames of one-hit ball with seven Ks and four walks. Peacock was roughed up in his debut for Syracuse, but in the past two starts, he’s only given up five hits and one earned run in 12 IP, fanning 11 and walking five.

At Double-A, he was crazy good, earning 10 wins in 14 starts and 16 appearances with off the charts command and microscopic hit rates.

A 41st round pick by the Nats way back in 2006, Peacock has probably raised his stock more than any other prospect in the game this season. Hell, before this season this dude wasn’t even a consensus Top 10 pick among Nationals prospects, never mind an emerging big-name prospect across the game.

Keeper league owners should be all over Peacock now, and don’t be surprised if he makes an appearance in Washington this year and provides some value for redraft league owners very soon.

Washington may have a decent reliever on the way in former Baylor star Jeff Mandel, the team’s 19th round pick in 2007. He’s already 26, so the upside is extremely limited, but Mandel is enjoying a much better season at Triple-A than he did last year, when he was still mostly a starter.

The conversion into a full-time reliever has definitely helped, and Mandel has been particularly tough lately. After a rough June, he’s been seriously nasty in July, earning two wins in 10 games with a 0.71 ERA and 17 strikeouts in 12 2/3 IP. Mandel began the season at Double-A, but after five sharp outings, he was back with Syracuse and I really like the fact that he’s inducing more ground balls than ever.

Following the 2009 season, after enjoying success in his first taste of Double-A, Mandel was starting to pop up on the Washington Nationals prospect lists, but last year was a disaster for him, ending his chances at being a starter. Moving to the bullpen, however, has helped put him back in the mix for a spot in Washington in the not too distant future.

Outfielder Austin Krum, the Yanks’ ninth rounder in 2007, got a look in Spring Training this year, but he was reassigned to minor league camp fairly early in the process. The speedster starter the year at Double-A – his third season at this level – and was promoted to Triple-A after a few weeks after showing modest offensive improvements, although certainly not in the power department.

Krum’s Triple-A debut has actually gone somewhat well, as he’s again shown a slight uptick in numbers. He’s hit in four straight games, including delivering the go-ahead run on Monday to key a win for Scranton/Wilkes-Barre. He’s now hitting .361 with 15 walks in July helping raise the 25-year-old’s prospects of one day getting a sniff in the majors.

For a dude with no pop, Krum definitely whiffs too often, but if he can continue to improve his on-base skills, we can overlook that to an extent. He’s showing a bit more gap power this year, but it’s clear that extra-base pop and productivity will never be Krum’s calling cards. While he does bring a few tools to the table, Krum’s intensity has not always worked to his advantage. His upside is likely as a fifth outfielder that’s capable of supplying speed.

Heading into the season, Chris Marrero is someone we projected would get his first look in the bigs at some point this year. Given the season he’s having, we certainly haven’t changed our view about that. The Nats’ first baseman of the future has been a bit quiet lately, but after a sluggish start at Triple-A, he’s been playing at a high level for nearly three months.

Marrero is not swinging the power bat we’re accustomed to seeing from him, but he’s become a much more patient hitter this year, and that’s a great sign. Formerly the top prospect in the National system, Marrero has slipped in the past couple of years, but he just turned 23 and his big debut at Triple-A has him back on track.

Back at the Yankees’ Triple-A squad, veteran Mike Lamb is still kicking around. The soon-to-be 36-year-old first baseman played 39 games with the Marlins last year, struggling badly. In 10 major league seasons, Lamb has played 975 games, but after a big year at Triple-A last season, he had to start this season in Independent baseball.

The Yanks signed him a few weeks ago to provide an offensive spark for a struggling Scranton offense. Lamb’s been alight, but is hardly lighting it up, and with 15 strikeouts in just 22 games, no speed and a middling .280 BA, he’s not exactly putting himself in contention for another look in the Show. Lamb still has solid extra-base pop, so he could be a decent bench player in the majors, but he’s getting a bit long in the tooth, so his chances of reaching the 1,000-game mark are slipping. More Indy baseball could very well be in his future.

By RotoRob
This entry was posted on Thursday, July 28th, 2011 at 10:22 am and is filed under BASEBALL, Minor Matters, Prospects, RotoRob. You can follow any responses to this entry through the RSS 2.0 feed. You can leave a response, or trackback from your own site.