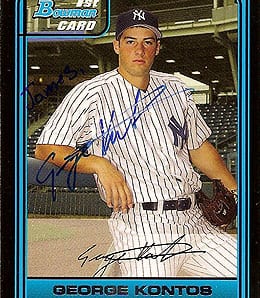 George Kontos has been up and down lately, but has had a strong season at Triple-A.

George Kontos, the Yankees’ fifth round pick in 2006, has mostly been dominant in his role as a long reliever in this, his first full season of Triple-A. Converted from a starter into a long man/spot starter after Tommy John surgery in 2009, Kontos throws his fastball in the 88 to 92 mph range.

He was looking filthy good in the first few months of the season (2-0, 2.65 in April; 1.08 in May; and 1.93 in June with 26 Ks in 23 1/3 IP), but has definitely hit a snag in July. Kontos started the month brilliantly, tossing four innings of one-hit shutout with five Ks and no walks in his second start of the season, but he was rocked in his next outing (four hits, three earned runs and a walk in one inning). Four days later on July 10, Kontos tossed two shutout frames, but then he got hammered again on July 16. He looked strong on the 19th, hurling 2 2/3 IP of shutout ball with four strikeouts, but on Friday night, the evil Kontos showed up again, getting rocked for three earned runs in 3 1/3 IP to suffer the loss and drop his record below .500. In fairness, he was looking sharp to begin the outing, before hitting the wall on a very hot night.

Overall, this has been a fine year for Kontos, with a 2.95 ERA and 66 Ks in 64 IP. The 10 dingers he’s served up is worrisome, but if he can regain his form from the first three months of the season, Kontos has a chance to make his big league debut in September.

Kontos came in Friday to relieve starter Adam Warren, who was pulled after just one inning. Apparently, Warren is being considered to start one of the Yankees’ doubleheader games next Saturday, so they are babying him. He’ll toss another short outing on Monday and be available to start for New York if needed on July 30.

The Yanks’ fourth rounder in 2009 is in his first season at Triple-A and he’s enjoyed a pretty strong debut with some solid hit rates. He’s been good enough to earn a spot on the International League mid-season All-Star team. A five-pitch hurler, Warren came out of college as a polished prospect and, accordingly, he’s been moved through the system aggressively. He turns 24 next month, and it will be interesting to see how he handles his big league debut, assuming he gets the call next weekend.

Scranton/Wilkes-Barre manager Dave Miley has now been running the Yankees’ Triple-A affiliate since 2006 as he continues to wait for another crack at the Show. You may remember that Miley managed the Reds from 2003 to 2005, but his 125-164 record didn’t exactly scream “I’m the man to take you to the promised land,” did it?

Scranton/Wilkes-Barre is currently 51-47, good for third place in the North Division, five games off the pace.

Speaking of people trying to get back to the majors, infielder Kevin Russo failed to make the Yanks out of Spring Training after appearing in 31 games with the club last year. But the recovery he’s shown offensively this year after a sub par 2010 has definitely left him as a prime candidate for recall should injuries necessitate a move.

Russo has hit safely in six straight games, and has been absolutely on fire in July. His extra-base pop has recovered somewhat, but his walk rate has dipped slightly.

Remember that this dude was an All-Star in his first season of Triple-A in 2009, but he really hasn’t come close to duplicating that since – until the past three weeks, that is. The 27-year-old looks ready to handle a utility role in New York if he’s needed.

With very little fanfare, catcher Jhonatan Solano is enjoying a breakout year for Triple-A Syracuse. Signed out of Columbia prior to the 2006 season, Solano has been hitting the cover off the ball to the point where he’s starting to earn more and more playing time – especially with Jesus Flores being brought up to Washington.

On Friday, he had two key hits, a three-run dinger in the fifth and an RBI single in the eighth as part of a three-hit night, giving him six hits and seven RBI in the last three games.

The Nats’ catching ranks is a bit of a crowded place these days as the expendable Ivan Rodriguez remains with the organization while he recovers from an oblique injury. Meanwhile, Wilson Ramos is being given every opportunity to develop into a bona fide major league backstop. Flores is back with the Nats with I-Rod out, and it wasn’t that long ago that he was considered the catcher of the future for Washington, but he has struggled offensively this season.

Veteran Carlos Maldonado is hitting a bit better at Triple-A this year, but he’s organizational depth at best at this stage of his career. And then there’s prospect Derek Norris, the team’s fourth rounder in 2007. Two years ago he looked like a major up and comer after a huge season at Class-A, but last year he slipped offensively at High-A and this season his offensive game has continued to regress at Double-A.

Given some of these developments, I wonder if it’s time to bump Solano up the depth chart a bit?

By RotoRob
This entry was posted on Saturday, July 23rd, 2011 at 11:55 am and is filed under BASEBALL, Minor Matters, Prospects, RotoRob. You can follow any responses to this entry through the RSS 2.0 feed. You can leave a response, or trackback from your own site.