The Wire Troll: The Arrival of Mike Trout 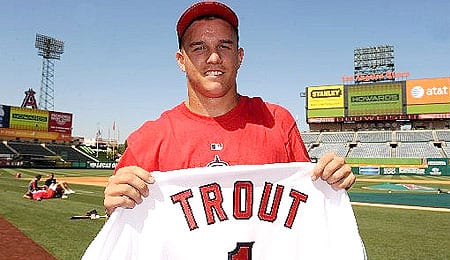 The Angels surprised us by calling up Mike Trout, but his stay will be short.

The All-Star break starts this week, giving Fantasy owners an opportunity to seriously analyze their squads. We’re now over halfway home and the categories and areas for point gains should be well defined. Spend the time wisely assessing your Fantasy team and get the trade offers going. Just a quick heads up for those playing in weekly leagues at ESPN you will be setting your rosters for a full two weeks. Without further ado, let’s give this week’s wire pickups the once over.

Mike Trout, OF, Los Angeles Angels (CBS: 54 per cent owned, Yahoo!: 26 per cent): Peter Bourjos tweaked his hammy last week and the Halos — in a surprising move — called up one of the best young prospects in the game in the 19-year-old Trout. The young phenom is enjoying an outstanding season at Double-A, smacking nine homers with 27 RBI, 28 thefts, and a superb .324 BA in 290 at-bats. Manager Mike Scioscia, renowned for his loyalty to his veteran players, has already stated that Bourjos is his man once he returns from this injury. Trout should be owned in all keeper formats, but is nothing more than a short-term add in one-year leagues as even a great start is unlikely to keep him on the big league roster when Bourjos comes back.

Zack Cozart, SS, Cincinnati Reds (CBS: 13 per cent owned, Yahoo!: 2 per cent): The Reds finally tired of the non-producing Paul Janish and his 530 OPS, farming him out and recalling Cozart, 25, to provide some offensive punch in their middle infield. In 323 at-bats at Triple-A Louisville, Cozart has seven homers, 32 RBI, nine thefts, and a great .310 BA. Last season, he smacked 17 homers and stole 30 bags in 553 at-bats at Louisville. Cozart will get a lengthy audition to prove he’s ready for the gig and should be the most sought after player in this week’s free agent frenzy.

Travis Snider, OF, Toronto Blue Jays (CBS: 39 per cent owned, Yahoo!: 23 per cent): After spending two months at Triple-A Las Vegas working on his swing mechanics, Snider was recalled on the Fourth of July and the fireworks commenced immediately. In six games last week he went 10-for-27 with one homer and eight RBI. The early returns suggest that the time down on the farm was well spent, so if he’s available get Snider active and rolling in all formats for the second half.

Javy Guerra, RP, Los Angeles Dodgers (11 per cent owned, Yahoo!: 6 per cent owned): The Dodgers’ pen is one of many around the league that is currently in disarray, especially since it’s looking quite likely that closer Jonathan Broxton could be lost for the year. There are other options in Kenley Jansen and Hong-Chih Kuo, but for now Guerra has the job.The Dodgers aren’t generating many save opportunities but if the chance arises, Guerra is currently the go-to guy in the ninth.

Tyler Flowers, C, Chicago White Sox (CBS: 3 per cent owned, Yahoo!: 0 per cent): Ramon Castro broke his right hand Saturday and recalled Flowers from the minors. In 222 at-bats at Triple-A Charlotte, Flowers has 15 homers, 32 RBI, and a .261 BA. Veteran starter A.J. Pierzynski has accumulated 286 at-bats already, isn’t getting any younger and is going to need some games off over the dog days of summer. The dearth of talent this year at catcher makes Flowers a solid pickup in two-catcher and AL-only leagues.

Jon Rauch, RP, Toronto Blue Jays (CBS: 20 per cent owned, Yahoo!: 30 per cent): The revolving door at the back end of the Jays’ pen keeps spinning. Frank Francisco is currently out and Rauch is in. It’s a messy situation and by next week the roles could very well be reversed. If the opportunity is there, handcuff Rauch and Francisco tighter than Pacman Jones in a Cincinnati bar.

Eduardo Nunez, SS/3B, New York Yankees (CBS: 10 per cent owned, Yahoo!: 2 per cent): Alex Rodriguez has been diagnosed with a slight meniscus tear in his right knee. He’s exploring his options and should he opt for surgery, he will be lost for upwards of a month. Nunez did a more than capable job filling in for Derek Jeter when the Captain was sidelined in June and you should expect more of the same should the opportunity for everyday at-bats present itself.

Brian Duensing, SP, Minnesota Twins (CBS: 35 per cent owned, Yahoo!: 10 per cent): After an incredibly inconsistent and disappointing June, Duensing has now reeled off two great starts in July including a complete game, six-hit shutout Monday against the Rays. I’m betting we see a more consistent Duensing over the balance of the 2011 season.

Barry Zito, SP, San Francisco Giants (CBS: 33 per cent owned, Yahoo!: 14 per cent): Zito has now produced three outstanding starts with three consecutive wins since returning from missing virtually all of the 2011 campaign with a mid-foot sprain. Aberration or not, you simply can’t pass up the opportunity to get him active while he’s hot.

Guillermo Moscoso, SP, Oakland Athletics (CBS: 8 per cent owned, Yahoo!: 3 per cent): It’s very difficult to believe that a starting pitcher who is currently sporting a 2.16 ERA and 1.04 WHIP in eight starts won’t have the opportunity to open the second half in the Athletics’ rotation.

By Tim McLeod
This entry was posted on Sunday, July 10th, 2011 at 11:23 am and is filed under BASEBALL, The Wire Troll, Tim McLeod. You can follow any responses to this entry through the RSS 2.0 feed. You can leave a response, or trackback from your own site.