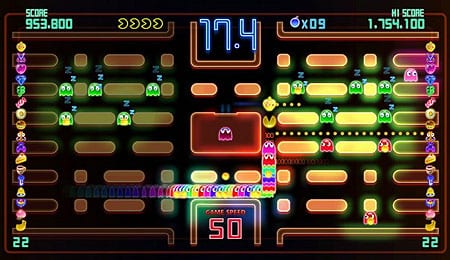 Pac-Man attracts quite a conga line…

I love Pac-Man. I always have. It’s why the video game banner on our site has Pinky moving back and forth across it. Despite that affection, I must admit to being a bit skeptical as to how much better Pac-Man Championship Edition DX could be than the original Pac-Man CE that came out three years ago. To my surprise (and delight), it absolutely blew it away.

If you’d asked me my thoughts about the addition of a button before I played Pac-Man CE DX I would’ve dismissed the notion as blasphemous. However, after seeing just how well adding the ability to bomb ghosts with the right trigger holds up, I’m completely sold. It’s all tremendously smooth and even at breakneck speeds you’ll rarely miss a turn you intended to make.

One of the most impressive things about Pac-Man CE DX is that the source material remains the same as when the original launched nearly 30 years ago — you’re still a little yellow circle that’s gobbling up dots and fruit while fleeing from ghosts through a series of mazes. Despite using those humble beginnings as the framework, Namco Bandai has churned out a completely engaging final product. Each map offers different background and character skins to choose from, all of which are unique and colourful.

The game’s techno soundtrack matches the high intensity on-screen action step for step, building and accelerating in all the right places. I’m not a fan of that style, but it’s so well integrated, I honestly can’t even think of what other musical accompaniment could take its place. All the classic sound effects and signature ditties are present as well.

I’m going to go ahead and assume everyone knows the basics of Pac-Man, but you may not have played Pac-Man CE, which had you eating all the dots on one side of a maze to reveal a piece of fruit on the other. Munch that and the opposite side repopulates. Games are timed and instead of attempting to advance to later levels, your only goal is to rack up as many points as possible.

What Pac-Man CE DX adds is a ton of ghosts. Yes, there’s still the little spawn pen located in the centre of the maze, but now when you consume the fruit it’s usually not just dots that show up. Instead you’re greeted by groups of slumbering ghosts. Guide Pac-Man past them and they’ll awaken to give chase. Keep this up and you’ll eventually find yourself with a pursuing entourage of literally dozens of angry ghosts. That means when you find a power dot, smartly spaced out so that most of your time is spent evading, it’s open season on ghosts.

Early on you may not go out of your way to awaken ghosts, instead being content to clear sections and trigger the next fruit, but once you get comfortable you’ll find chaining together ghosts is the best way to increase your score.

Beyond the exponential increase in paranormal activity, there are two other notable additions. The first is the inclusion of bombs, which when detonated sends all the active ghosts on the screen back into the central holding area while reducing the game speed that’s building at the bottom of the screen. The other is that the game now transitions into slow motion whenever you’re about to run into a ghost. Both make it much more difficult to die, but given the combination of blazing speed and massive ghost population, I’m glad they’re in place.

There’s also a lot more variety in Pac-Man Championship Edition DX with eight unique mazes that each offer a litany of high score, ghost combo and speed run challenges. I often touch on the value of nostalgia with a lot of the Xbox Live/Playstation Network re-releases, but what’s rare about this game is that it manages to feel completely fresh while utilizing the singular goal of earning the highest score possible to create those familiar pangs of competitiveness.

To that end, this game is incredibly addictive. Even with most modes lasting five minutes or less it’s pretty incredible how quickly all that adds up and suddenly you’ve been playing the same level for an hour and a half trying to reach some arbitrary point total or spot on the leaderboard.

About the only criticism I can levy against Pac-Man CE DX is that when the speed tops out it can be a little unwieldy. At least once every couple of games I will end up a bit discombobulated after not making a turn I intended to — it rarely leads to deaths, but it can send you weaving through the maze and cost you precious seconds, which oft times can be the difference between keeping a ghost multiplier rolling and watching it reset.

The quintessential “easy to learn, difficult to master” game, Pac-Man Championship Edition DX is no doubt one of the best titles available on Xbox Live or Playstation Network. It’s absolutely brilliant.

By Herija Green
This entry was posted on Sunday, January 16th, 2011 at 7:46 pm and is filed under Herija Green, Video Game Reviews. You can follow any responses to this entry through the RSS 2.0 feed. You can leave a response, or trackback from your own site.