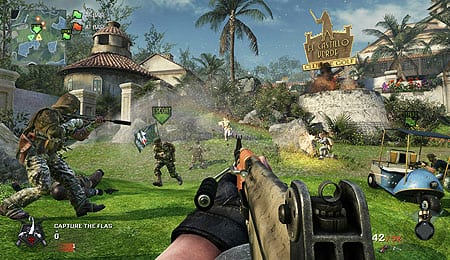 Although it’s been less than two months since the Escalation map pack hit the Xbox Live marketplace, Activision and developer Treyarch are back at it, releasing a third round of DLC for Call of Duty: Black Ops. Like the previous two installments, Annihilation will set you back a cool 1,200 MS Points, and it comes packed with the usual four adversarial maps (Drive-In, Hangar 18, Hazard and Silo) and a new zombie mode (Shangri-La).

Is the new content a worthy successor to the excellent Escalation pack? Or have Activision and Treyarch gone to the well once too often? Read on for my impressions of the new content.

It seems like almost every Call of Duty map pack has the obligatory rundown family fun location in it, though when they’re as well thought out as Drive-In I’m not going to complain. The map features a large central area where movie-goers used to park and watch films with several elevated vantage points for sniping surrounding it. Those that prefer close quarters combat can stick to the periphery where arcades and refreshment stands offer plenty of chances for quick twitch action. It plays very well and offers a lot of choices when it comes to navigating the map or cutting down entrenched foes.

As an aside, there are a lot of clever little graphical nods to all things CoD to be found in Drive-In. That includes pinball machines bearing the names of Annihilation’s other three maps, a stand-up World at War game (think Operation: Wolf) and even a framed photo of a house that I’m about 90 per cent sure is from the Stockpile map.

Despite a fairly uninspired backdrop — lots of big satellite dishes and, you guessed it, a massive hangar that dominates the map — Hangar 18 is a solid addition. Most of the action gets funneled into the title feature, which has entry points on all four sides (three of them can be entered via ground or elevated positions), control rooms on either side of the main floor and a walkway that connects them. For those that like to stick and move, the sides offer a maze-like collection of buildings and pathways, which allows defensive players to lay in wait and offensive players to circle around for counter attacks.

Easily the most visually unique of the new maps, Hazard takes place at a swanky Cuban golf resort with a fairway cutting right through the heart of it. It’s a very lush location with lots of green grass and flowers, which are significant departures from most CoD locales — even the buildings are relatively undamaged. I enjoyed the map, but I can see it being unappealing to certain types of players. That’s because the central area is essentially no man’s land, and as a result the vast majority of the fighting gets filtered out to the edges. This promotes a more tactical approach with lots of cautious movement. Those that prefer to snipe or sprint haphazardly around could post some ugly K/D ratios.

Set at a Soviet missile base, Silo is my least favourite of the new locations. To be fair, though, it does offer a different mix of tactics than the others because there really is no central fighting location. A trio of elevated sniper spots are perennially occupied, but none of those vantage points offer much protection, which makes lone gunmen fairly easy pickings. Sweeping the perimeter was a popular approach, and with the number of flanking options available you’ll find taking people (and being taken) by surprise happens a fair amount. Graphically, Silo didn’t do much for me as it favours that classic drab brown and gray approach.

As noted when I wrote my impressions of the First Strike map pack, Zombie mode doesn’t hold the same appeal to me that it does for many others. That being said, Shangri-La is unquestionably the most fun I’ve had fending off hordes of the living dead. The switch from dark and dingy locales to the remnants of the mythical city of Shangri-La buried deep in the jungle instantly differentiates it from past Zombie maps in all the right ways. It’s brighter, contains plenty of cool secrets for you to stumble upon and features a host of new enemies (including devious zombie monkeys!).

When Activision first announced Annihilation in such close proximity to the last map pack I thought it was entirely possible that we’d hit the saturation point. We haven’t. Annihilation is another great collection of maps that Black Ops fans shouldn’t think twice about downloading.

By Herija Green
This entry was posted on Friday, July 1st, 2011 at 10:22 am and is filed under Herija Green, Video Game Reviews. You can follow any responses to this entry through the RSS 2.0 feed. You can skip to the end and leave a response. Pinging is currently not allowed.