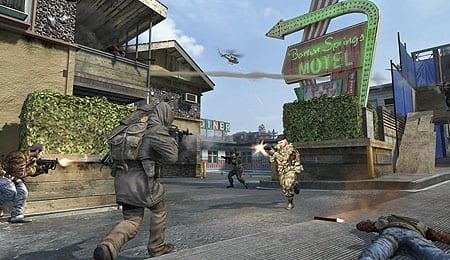 The Barton Springs Motel may be prone to gunfire, but hey, at least they have free ice.

Even with new shooters entering the online fray seemingly every week, Activision’s juggernaut, Call of Duty: Black Ops, continues to dominate the competition. And this week marks the release of the title’s second wave of downloadable content with Escalation, providing its fan base with yet another reason to forego all other shooters.

Priced at 1,200 MS Points, Escalation comes loaded with four brand new adversarial maps (Convoy, Hotel, Stockpile and Zoo) along with another zombie adventure (Call of the Dead). Does this new map pack deserve a spot on your hard drive? Here are my thoughts on what’s included.

Although Convoy gets its name from ill-fated missile trucks that now lay dormant, those signature features have virtually no role in how the map plays. Two overpasses give each side an equal view of the destroyed freeway below. Each bridge is open in the middle and closed on the edges, allowing for lots of popping out and firing before quickly ducking back behind cover. Large and fairly open paths are available to the left and right with nice camping spots for both teams, though unless you’re able to hold all three pathways, it’s fairly easy to circle around and root out the campers. A dilapidated gas station, motel and diner give this location plenty of personality. Combat is fast-paced and intense.

Large and symmetrical, Hotel features a casino on one side and (you guessed it) a hotel on the other with a spacious recreational area — including a pool and even a steam room — in between. Each major building features a working elevator, which is a cool addition that allows you to sneak up on foes or even lay traps. There are a couple of large elevated areas on each side for sniping that overlook much of the exterior grounds. As a result, most travel from one side to the other is handled via paths on the periphery, which can be turned into choke points for well organized squads. If there’s an issue with Hotel, it’s that it can feel a bit too big for 6-on-6 combat at times. Still, I really enjoyed the layout and vibe here, it’s very cool.

Map Pack Rule #163: There must be snow. Here to fulfill that quota is Stockpile, which is located in a small Russian town that is concealing Weapons of Mass Destruction. It’s a smallish map with a very tightly defined area of engagement. The central region, which features an electronic door that opens and closes, is where everything seems to go down while the surrounding areas tend to serve as little more than a way to enter the main complex from different paths. Snipers can set up shop and try to pick off stragglers that spend too much time out in the open, but this definitely feels more like it is skewed toward close-quarters action. It’s not bad, however, I’d classify it as the weakest of the four.

In a lot of ways this map feels like a spiritual successor to Modern Warfare 2’s Carnival. It’s not quite as gimmicky, but it’s got the same type of broken down attractions to conceal yourself in as well as a narrow monorail track you can access (a la Carnival’s roller coaster) at your own peril as it tends to leave you overly exposed. Thanks to some drained moats, there are actually three elevations you can traverse and the overall design does a good job of promoting constant movement. Sure, there are a handful of regular gathering points for would-be snipers, but they’re all fairly exposed and only the most skillful can stay hunkered down for long.

Call of the Dead (Zombie Mode)

For this foray into the fighting of zombie hordes, Treyarch has planted tongue firmly in cheek by casting real-life actors like Sarah Michelle Gellar and Danny Trejo into the role of undead slayers. There’s a clever (if a bit long) intro to the proceedings before the real fun begins. Unlike previous variations, Call of the Dead brings the threat of death from Wave 1 on in the form of a hulking, electrified George Romero, who does a convincing impression of Nemesis from Resident Evil 3 by constantly stalking you. Shoot him and he’ll become enraged until you lure him into the freezing water. It’s supposed to be silly (and it is), but he’s a legitimate menace that’s extremely difficult to kill. The icy setting is a good one in that it obscures vision and creates areas you can only stand in momentarily, creating tension and the need to continually be in motion.

Escalation offers up four good looking and well-designed adversarial maps along with a cool variation of the immensely popular Zombie mode. It’s arguably the best map pack for any Call of Duty title to date and should provide enough added gameplay to more than justify the asking price.

By Herija Green
This entry was posted on Friday, May 6th, 2011 at 2:09 pm and is filed under Herija Green, Video Game Reviews. You can follow any responses to this entry through the RSS 2.0 feed. Responses are currently closed, but you can trackback from your own site.