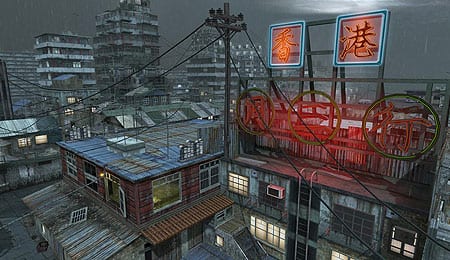 It was about a year ago that Activision’s decision to price its first map pack for Modern Warfare 2 at 1,200 MS Points (US$15) was met with anger. Gamers swore the cost was outrageous and vowed to boycott the DLC. Then it came out and everyone bought it anyway. Fast forward to now and Call of Duty: Black Ops has supplanted MW2 as the pre-eminent multiplayer shooter on Xbox Live. So while the initial package offered up a respectable number of locales, after three months the Black Ops community is definitely ready for some new content.

Once again checking in at 1,200 MS Points, First Strike contains four new adversarial maps (Berlin Wall, Discovery, Kowloon and Stadium) along with a new zombie battleground (Ascension). So is it worth your hard earned money? Here are my thoughts on what’s included.

Set long before Mikhail Gorbachev tore it down, Berlin Wall is a winding maze of two-story buildings ripe for a mix of close quarters combat and snipers. Thankfully, there’s plenty of ways to minimize exposure to the latter as you weave in and out of buildings. The map is divided right down the middle by a no man’s land — enter it anywhere except a couple of small paths and alarms will sound, causing unseen guards to open fire on you. You’ve seen this basic layout plenty of times before in Call of Duty and the turrets amount to little more than a gimmick. Still, it’s well balanced and nicely detailed.

This map takes place at an Antarctic base inconveniently constructed on either side of a gaping chasm that players can tumble into (and seemingly never land). There are several ways across, which combined with multiple entry points to every building, prevents snipers from getting too comfortable. The ice bridges located on Discovery are destructible via explosives or gunfire and destroying them can cause you to alter your tactics on the fly. It’s a solid, fast-paced map.

Although adapted from the Black Ops campaign, I couldn’t help having flashbacks to the early stages of Kane & Lynch 2: Dog Days where they pursue a target across the rooftops of Shanghai. Visually, this map is impressive with neon signs providing sharp contrast to the driving rain storm. However, the nighttime setting and vertical focus creates some confusion based on the lack of clearly defined parameters as there were times where I wasn’t sure if I (or an enemy) could reach a visible section. More damaging is that Kowloon seems to favour camping in buildings for cheap close quarters kills. An in-map zip line also allows for fast travel, but I rarely saw anyone use it as sliding down makes you a defenseless target.

Considering the primary feature of this map is an ice rink, it’s odd that it isn’t entitled “Arena” or maybe even “Complex.” Naming issues aside, Stadium is undersized, wide open and intense. For better or worse the action moves at a blistering pace here with kills and/or deaths seemingly lurking around every corner. Snipers need not apply as there is minimal high ground to be had and few unobstructed lines of sight with which to pick off hapless opponents. It’s got a different look to it than the other maps, which is nice, creating an urban feel without the usual proliferation of destroyed buildings.

While I’m not the biggest fan of Treyarch’s Zombie mode, many will no doubt be viewing the inclusion of a new zombie map as First Strike’s most important addition. To its credit, Ascension pushes the envelope by introducing not just a new location, but also new weapons (including the “Black Hole Bomb”), perks and enemies (celestial monkeys, anyone?). Obviously the core gameplay of collecting funds to buy better weapons and access new areas hasn’t changed, but when you consider that only a couple locations were included in the retail game you could make a pretty strong argument that Zombie mode needed additional content more than the adversarial ones.

As you’d expect from the Call of Duty franchise, there isn’t a lemon in the group. All four multiplayer maps inject new life into online play while maintaining a level of familiarity that will make them all instantly accessible to fans. If your interest was waning, First Strike should be just the jolt you need to get back to the business of owning people online.

By Herija Green
This entry was posted on Friday, February 11th, 2011 at 4:12 pm and is filed under Herija Green, Video Game Reviews. You can follow any responses to this entry through the RSS 2.0 feed. You can leave a response, or trackback from your own site.