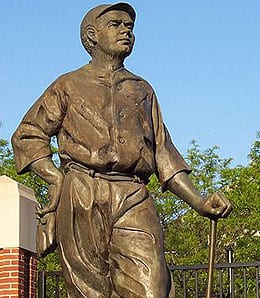 With all the attention being paid to Derek Jeter and his pursuit of his 3,000th hit (on Wednesday, he pulled within 11), I took the opportunity to peruse the all-time hit leaders recently. One name that really jumped out at me was Ivan Rodriguez. Intuitively, I understand what a great career he’s had, but I had no idea how many more hits he’s had than any other catcher in big-league history.

Pudge is 165 hits shy of 3,000, and while I’m not sure he’ll stick around long enough to reach that mark, he’s only 38 hits away from matching Babe Ruth for 40th place. As many hits as the Bambino? If there was ever any doubt that I-Rod should be a first-ballot Hall of Famer, we can throw those out right now.

Looking for a spot starter to plug in for your NL-only league team? How about giving Kyle Kendrick a shot for Thursday’s game at home against the Cubs? Chicago’s offense has been middling this season, but has been downright brutal lately, so Kendrick could surprise with a decent start. His hit and homer rates are much-improved this season, so if his 2010 command would re-emerge, Kendrick might be a useful asset. For now, he’s a flier at best.

Torii Hunter, who couldn’t hit his way out of a wet paper bag to start June, has picked things up a bit lately, recording hits in three straight games, the last two being multi-hit efforts. On Wednesday, one of his hits was a double, and that in itself is almost news as extra-base knocks are coming less often for Hunter than at any time since 2000. He also scored a run, just his 24th in 63 games this season, putting him on pace for only 63 runs – his lowest total since 2005, when he played less than 100 games.

What is interesting here is that Manager Mike Scioscia moved Hunter to the two-hole on Wednesday to try to get the struggling Halo offense kick started. The Angels had only managed 13 runs in the previous seven games, so the three runs off eight hits they put up Wednesday actually wasn’t bad, but not good enough to avoid their fifth straight loss. Hunter, who has spent most of the season in the clean-up spot, is going to have a very different role batting second, and it’s definitely going to hurt his RBI numbers. However, he could see a spike in runs, if anyone can actually drive him in, that is (in the seven games before Wednesday’s loss, the Angels were hitting .190 with runners in scoring position).

We ranked Hunter among the top 30 outfielders in the game heading into the season, but did warn you he could be a flop. It turns out we were bang on there, as he’s barely been a top 60 flyhawk through the first two and a half months of the season. Hunter actually had a pretty good May (19 RBI, 814 OPS), but unless his current run extends into something more substantial, it wouldn’t shock us to see him landing on the wire in more shallow mixed leagues.

There hasn’t been much good news coming out of Anaheim lately, but set-up man Scott Downs has looked extremely sharp and is a very nice arm to consider in deeper AL-only formats or leagues that count holds. He was hurt earlier this season, a situation that – combined with Fernando Rodney’s suckitude – allowed Jordan Walden to grab the closer job. You have to wonder whether Downs would have been given the gig had he been healthy at the time of Rodney’s implosion. While Walden has had his shaky moments, he’s rolling now, so it’s doubtful he’ll lose the closer job for the time being. Still, Downs is someone to watch and consider should the rookie Walden hit another rough patch.

By RotoRob
This entry was posted on Thursday, June 9th, 2011 at 12:10 pm and is filed under BASEBALL, MLB Today, RotoRob. You can follow any responses to this entry through the RSS 2.0 feed. You can leave a response, or trackback from your own site.