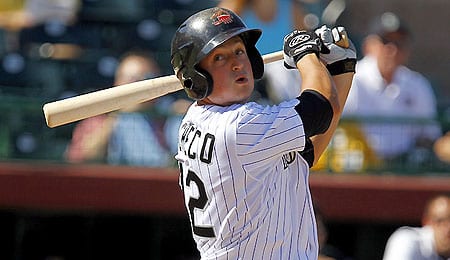 Jordan Pacheco soared through the Rockies’ system in 2010, but has hit a wall so far this year.

Colorado catching prospect Jordan Pacheco entered this season looking like a kid on the rise. He had enjoyed a phenomenal season at High-A, earning a 21-game trial at Double-A during which he kept raking. More impressively still, Pacheco was sent by the Rox to the AFL last fall and he put up a fantastic 876 OPS in the prospect-laden showcase.

Colorado responded by bumping the 25-year-old up to Triple-A this season. Well, his adjustment period is kicking in now. Pacheco had a fine start, batting almost .330 in April, but he suffered a concussion after getting hit in the head with a pitch on May 5, missing a good chunk of the month. He hasn’t quite been the same since, recording an OPS of just 579 in May, and batting only .214 so far in June.

A ninth round pick in 2007, Pacheco caught the attention of plenty of prospect hounds last year, so let’s give him a bit of rope and see how the adjustment goes over time. With an advanced grasp of the strike zone, Pacheco definitely has the chance to turn into a high average catcher with decent pop, so Fantasy owners would be wise to track his progress.

Still with the Rockies, it will be in interesting to see if veteran Mike Jacobs gets another shot at the majors. The owner of nearly 2,000 career MLB at-bats, Jacobs lost his job with the Mets very early last year before getting dealt in mid-season to the Toronto organization. He wound up in the Colorado organization this season, and the 30-year-old is just two years removed from a 32-homer season.

With Jason Giambi’s nice little run will get him more consideration as a full-timer should Todd Helton get hurt again, what Jacobs is doing down at Triple-A must have caught the Rockies’ eyes as well. Jacobs is batting an uncharacteristically high .302 through 212 at-bats at Colorado Springs with nice extra-base pop and 42 RBI in 58 games. He’s still racking up plenty of strikeouts, but an OPS of 877 – even while playing half the time at a hitter’s haven like Colorado Springs – isn’t too shabby.

KC farmhand Lance Zawadzki has really turned things around since a slow start and has perhaps put himself in the conversation should the Royals decide that struggling shortstop Alices Escobar needs some farm time to find his batting stroke. Zawadzki, who spent 20 games with the Padres last year, failing to distinguish himself offensively (unless you count the extremely rare feat of drawing an intentional walk in your first MLB plate appearance), is red hot right now.

He hit just .154 in April, but bounced back with a .296 mark and 894 OPS in May. He’s been even hotter in June so far, recording back-to-back multiple hits games and running his streak to three straight two-hit efforts overall, with at least one hit in six straight games.

Zawadzki is flashing more extra-base pop, he’s been vastly more productive, and has really stepped up his work on the basepaths. The shortstop, who turned 26 last month, was a fourth round pick by the Padres in 2007 and is known for his strong throwing arm.

Finally, it looks like reliever Jesus Colome may have reached the end of the road. He joined the Rockies – his ninth organization – before the season, but as bad as he looked at Triple-A last year, Colome looked even worse this season, averaging over two hits allowed per inning. The Sky Sox released the 33-year-old after he was scored on in eight straight appearances.

Colome has made 341 appearances (all in relief) over 10 big league seasons, earning 19 wins and six saves, recording an ERA of 4.69 and striking out 330 with 224 walks in 426 innings. The last time he was effective at the major league level was 2008, when he had a decent season pitching out the Washington bullpen.

By RotoRob
This entry was posted on Tuesday, June 7th, 2011 at 11:59 am and is filed under BASEBALL, Minor Matters, RotoRob. You can follow any responses to this entry through the RSS 2.0 feed. You can skip to the end and leave a response. Pinging is currently not allowed.