The Wire Troll: Smoak ‘Em If You Got ‘Em 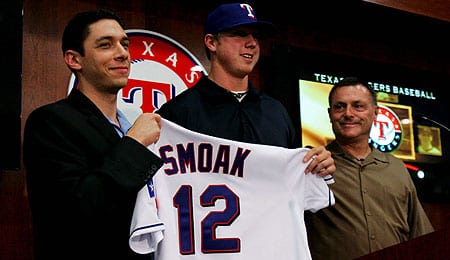 The Justin Smoak era has begun in Texas.

Heading into the last week of April we find that both the Rangers and Mets have made some big moves that Fantasy owners have reason to be excited about. Justin Smoak and Ike Davis are sure to generate massive levels of interest this weekend. The incredible high-end potential in both players is certainly there, but a note of caution is necessary as there are no shortage of options available on the waiver wire this week. It might be a great opportunity to look at upgrading in other areas and avoiding the FAAB spending that will ultimately occur Sunday.

Justin Smoak, Texas Rangers, 1B: The Rangers finally tired of Chris Davis swinging at air and have made the move that many have anticipated for quite some time, namely calling up Justin Smoak. Down on the farm, the 23-year-old Smoak had managed two homers, a great .300 BA and an outstanding 8/16 K/BB ratio. How can you not like this kid? Break out the FAAB cash and burn the waiver wire priorities this weekend if you need a power bat in your corner infield.

Mike Napoli, Los Angeles Angels, C: The fractured right wrist suffered by starting catcher Jeff Mathis has opened the door for some serious playing time opportunities over the next six-to-eight weeks for Napoli. He’s off to a terrible start this season, but with back-to-back 20 home run seasons, there is no reason to believe he won’t revert back to form and be an asset in all formats for at least the next couple of months.

Ike Davis, New York Mets, 1B: The Mutts had to make a move as their lineup currently has more holes than a pound of Swiss cheese. The man that is set to lead them to the Promised Land has arrived and his name is Ike Davis. The pressure in New York is enormous, but so far the young slugger has responded in fine form. In his first week on the job he is 7-for-20 with one big fly. The first round (18th overall) pick in the 2008 amateur entry draft is here to stay. Get him rostered and active in all formats.

Jeremy Hermida, Boston Red Sox, OF: Jacoby Ellsbury is currently on the DL with fractured ribs and this week was joined by Mike Cameron, out for three weeks with an abdominal strain. Hermida looks to be the principal beneficiary of the Red Sox injury woes and this week has stepped it up, batting 5-for-11 with a couple of long balls. Hermida should be rostered in all formats until the injury situation in Boston is resolved.

Barry Zito, San Francisco Giants: He’s looking like the Barry Zito that the Giants were expecting when they signed him to that mega-deal back in 2006 offseason. In 27 1/3 IP, he has allowed a scant 15 hits, with 19 strikeouts and only four earned runs. Zito is 3-0 through four starts with a 1.32 ERA and 0.84 WHIP and even with those stellar stats is still being started in less than 50 per cent of the leagues playing at both Yahoo! and CBS. If Zito is available in your league acquire him now and get him onto your active roster to take full advantage of his current hot streak.

Ty Wigginton, Baltimore Orioles, 1B/3B: He’s been on a tear and the anaemic Oriole offense needs all the help they can get. In his past 10 games, Wiggy is batting 10-for-27 with four homers and nine RBI. Brian Roberts doesn’t look like he’ll return from his back problems in the near future so playing time opportunities will be there. Ride Wigginton while he’s hot in all formats and take advantage of the outstanding numbers he’s currently putting up.

Koji Uehara, Baltimore Orioles, RP: The Oriole bullpen is also a mess and with the oft-injured Mike Gonzalez currently out for the foreseeable future, anyone with a pulse and the potential to find home plate without a GPS has the chance to emerge with value. Uehara is scheduled to depart for a rehab assignment this week and could return as early as Week Five. If your team is in desperate need of saves, he could be first in line immediately upon his return to B-More.

Nick Hundley, San Diego Padres, C: The 26-year-old Hundley is off to a great start so far this season. He has managed two homers, driven in eight runs, and is hitting a solid .282. Hundley has got the job and even though cavernous Petco is far from an ideal location for batting statistics, he should be rostered in all two-catcher leagues and NL-only formats.

John Jaso, Tampa Bay Rays, C: The platoon between Kelly Shoppach and Dioner Navarro has hit the skids because of Shoppach’s knee injury and Navarro is also likely on the verge of a respite from the game after his altercation Saturday with home plate umpire Dan Bellino. Jaso is the unlikely beneficiary and, in 11 at-bats since being called up from Triple-A Durham, he has four hits including one homer. With playing time comes opportunity and there should be enough PT over the next four-to-six weeks to make Jaso worthy of adding in AL-only leagues.

Fred Lewis, Toronto Blue Jays, OF: The Jays certainly need a lead-off bat in their lineup, but is the recently acquired Lewis the right man for the job? The former Giant slumped badly in 2009 and fell out of favour on the coast, but he did manage to steal 21 bases in 2008. Jose Bautista is not the answer at the top of the order for the Jays, making Lewis a fine addition in AL-only leagues.

Luis Atilano, Washington Nationals, SP: The 24-year-old Atilano has bounced back nicely from 2006 Tommy John surgery and after his 2010 debut Friday against the Dodgers — a sterling seven innings with five hits, two walks and one strikeout — his stock is on the rise. He is taking the roster spot of Jason Marquis so will get ample opportunities to ply his trade, but with the mid-four K/9 rates will be best left for standard 4×4 leagues and NL-only formats.

Rhyne Hughes, Baltimore Orioles, 1B: Is Garrett Atkins on the verge of joining Mike Jacobs in the ranks of the unemployed? A 543 OPS with no homers in 58 at-bats could be considered just cause. Brandon Snyder may be the ultimate first baseman of the future in Baltimore, but he’s had a slow start in Triple-A and the 26-year-old Hughes managed three homers, 11 RBI, and a stellar .353 BA in Norfolk. He will get an extended look over the next several weeks with the Orioles, making him a solid pickup in AL-only leagues.

Brennan Boesch, Detroit Tigers, OF: The man-giant Boesch managed three homers and 16 RBI while pounding the ball to the tune of a .379 BA in 58 at-bats for Triple-A Toledo. Carlos Guillen’s injury has opened the door for some playing time opportunities for Boesch in the short-term making him a great addition in AL-only leagues.

By Tim McLeod
This entry was posted on Sunday, April 25th, 2010 at 3:01 pm and is filed under BASEBALL, The Wire Troll, Tim McLeod. You can follow any responses to this entry through the RSS 2.0 feed. You can leave a response, or trackback from your own site.