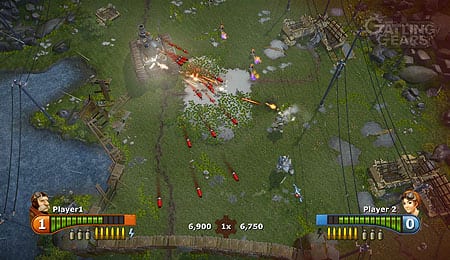 Twin-stick shooters have been around for a long time, and the downloadable marketplace has seen its fair share of them in recent years as well. The newest member of that fraternity is Vanguard’s Gatling Gears, an exceptionally well executed title that manages to stand out despite traversing some decidedly familiar waters.

Simplistically excellent would be an apt description of Gatling Gears’ twin-stick setup. You move with the left stick and fire your base Gatling gun with the right — powerful cannon rounds can also be fired along the same trajectory as your bullets by pressing either the right trigger or bumper. The left side brings up a targeting circle for grenades, which stops gunfire as you decide where to drop them. There is also a screen clearing attack available once per level with the “Y” button.

Everything works well and the feeling of dodging projectiles while alternating between your weapons is great. On occasion your mech won’t respond quite as nimbly as the situation dictates, but that’s almost certainly a design choice rather than a control flow.

I’ve always been partial to really detailed top-down visuals, and therefore the work done by Vanguard was right up my alley. The campaign takes place across five chapters (six if you include the prologue), and each one is decidedly different from its predecessor. From forays in a lush natural setting to rundown urban areas, they’re all beautifully rendered with lots of personality. There are also plenty of destructible items in the environment, which makes for some fun remodeling.

My lone criticism visually is that there are times when so much is happening on the screen during combat that it becomes difficult to take it all in. It’s not an issue with the larger enemies, but when red-clad soldiers are firing red projectiles it can get confusing. There are also times when shooting at a group of soldiers that it’s not clear which ones are dead, potentially leading to cheap damage being dealt.

Conversely, nothing really stands out on the audio side. The sound effects and background music, which favours sweeping orchestral tunes, generally get the job done, but they aren’t very memorable.

Set in Mistbound, the same mythical world of Vanguard’s Greed Corp, Gatling Gears tells a basic tale of an ex-soldier trying to lead a peaceful existence only to be drawn back into conflict by the despicable actions of his former compatriots. There’s no depth to speak of and — as with most Xbox Live Arcade titles — the story takes a backseat to the action.

That action takes place across a five-chapter campaign, which when combined with the prologue amounts to 30 individual levels. There’s nothing revolutionary going on here, but the familiar twin-shooter setup is expertly handled from start to finish. As the pilot of a giant mech you’ll go toe-to-toe with a large force of ground troops, tanks, enemy mechs and other assorted foes. The firefights are well paced and generally do a good job of being chaotic without feeling overwhelming or cheap.

Destroying your enemies is only half the battle, however, as most vanquished units will leave behind one or more gears for you to grab. These gears act as a score multiplier with every six you obtain increasing the multiplier by one. Your multiplier builds continuously through each level no matter how fast or slow you advance, though sustaining damage will decrease it. In theory, you could choose to bypass the gears altogether and just focus on advancing, but since the online leaderboards and secondary unlockables are based on points, that seems unlikely.

Each chapter culminates in an old school boss fight against an enemy many times your own size. These fights play out over multiple stages and are classic pattern recognition battles. The only downer is that they aren’t necessarily the most difficult part of a chapter, as encounters where enemies approach from three sides and fill the screen with projectiles often trump them.

Playing on the default setting presents a modest challenge for a skilled player with the likely exception of the penultimate level, which was seemingly much longer and more difficult than any of the previous missions. Even with that you should be able to max out your mech and power through the campaign in around five hours — the gold bars used as in-game currency to upgrade your weapons and life bar are incredibly easy to find. Each completed level also earns you experience points, which grant access to new paint jobs, armour effects (like smoke trailing your mech) and even pets.

Beyond the single-player campaign, you can also bring along a friend via local co-op or join forces through Xbox Live and PlayStation Network. Co-op play is fun, though the experience appeared to be identical with and without a partner. There’s also a three-map Survival mode, which tasks you with fending off 10 waves of enemies.

While not the most innovative downloadable title this year, Gatling Gears is definitely one of the most refined and enjoyable experiences I’ve had. It maintains its charm solo or with a friend and is the kind of game you’ll want to play repeatedly in search of that perfect run.

By Herija Green
This entry was posted on Wednesday, June 8th, 2011 at 12:07 pm and is filed under Herija Green, Video Game Reviews. You can follow any responses to this entry through the RSS 2.0 feed. You can skip to the end and leave a response. Pinging is currently not allowed.