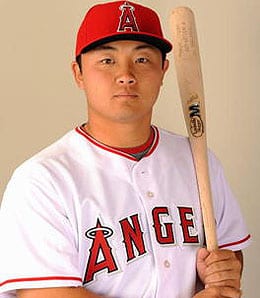 Hank Conger is a great player to stash if you have space.

The Angels’ catching situation has been a bit of a Fantasy wasteland this season. It’s become quite clear a long time ago that Jeff Mathis, while a solid defender behind the plate, will never be able to hit a lick. Bobby Wilson hasn’t been bad offensively in his limited chances this year, but he’s barely getting off the bench and is obviously not a long-term solution.

That leaves Hank Conger, who, while not quite as strong a defender, does bring more offense to the table – something the Angels have desperately needed at times this year.

Just over a month ago, it looked like Conger was starting to pull away from the timeshare and earn the lion’s share of starts, so we recommended him as a waiver wire pickup. And while he’s enjoyed the occasional nice performance, overall Conger’s offense has slipped since then and we’re pretty much back in a value-killing timeshare. Conger has seen action in each of the last three games, but he’s only actually started once over the last five – rendering him pretty much useless in anything but extremely deep AL-only leagues.

In his start Thursday, Conger doubled and walked, but he struck out for the third straight game and whiffs continue to be problematic for the youngster.

Still, with Mathis being among the easiest outs in the majors, most observers believe it’s just a matter of time until the Halos anoint Conger as the full-time catcher, so we still think that prudent owners should grab the rookie as a roster stash at this point. It’s a move that could very well pay off in the second half or sooner.

By RotoRob
This entry was posted on Friday, May 20th, 2011 at 1:11 pm and is filed under BASEBALL, MLB Today, RotoRob. You can follow any responses to this entry through the RSS 2.0 feed. You can leave a response, or trackback from your own site.