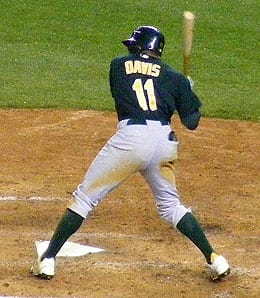 After struggling with an ankle woe, Rajai Davis finally landed on the DL.

Week Two of the 2011 season is ending with a crash. In the past week, Ryan Zimmerman, Rajai Davis, Joe Mauer, Erick Aybar, Andres Torres, J.J. Hardy, Rafael Furcal, Josh Hamilton and finally Phil Hughes have all managed to land on the DL for varying lengths of time. Roy Oswalt is dealing with a cranky back and Dallas Braden has shoulder issues. Similar to what happened in the NHL this season, the injuries just continue to mount. Losing at-bats or innings pitched in the early stages of the season will come back to haunt you, so be active and make the moves required to keep your roster active and the counting stats coming in. Without further ado, let’s take a look at some of this week’s diamonds in the rough.

David Murphy, OF, Texas Rangers: Any concerns owners had about how much playing time Murphy would get has been removed for perhaps the next two months thanks to the broken arm Hamilton suffered on Tuesday against the Tigers. Murphy is off to a solid start, posting a.321 BA with one homer, four RBI, and four thefts. Over the past three seasons, he has averaged 422 at-bats, 15 homers, 65 RBI, 10 steals, and a .277 BA. Outfield is not overly deep this season, so Murphy will offer solid value in all formats until at least the brittle Hamilton heals.

Daniel Murphy, 2B, New York Mets: The love affair with Brad Emaus in New York is quickly grinding to a halt. Mets Manager Terry Collins has announced that Emaus will get a set number of at-bats to prove he can handle the job and with the Rule Five pick currently batting .176 with no extra base hits for a struggling team, the clock is ticking. There is no doubt that Murphy can hit. He recorded an impressive 12-homer, 63-RBI rookie campaign before enduring a 2010 fraught with injuries. Murphy has shown some defensive improvements lately, so the slumping Mets have to find a way to get his stick into the everyday lineup.

Kyle Farnsworth, RP, Tampa Bay Rays: It appears that the verdict is in and for at least the short-term Farnsworth is manning the ninth inning duties in Tampa Bay. In 5 1/3 IP, he has allowed five hits and no walks and is 3-for-3 in the saves department with a win tossed in for good measure. More importantly, Farnsworth has earned the trust of Manager Joe Maddon. The surprising Rays have now won five in a row, giving the bullpen a sense of purpose (beyond just mopping up, that is) and the team’s fans a much needed morale boost.

Matt Capps, RP, Minnesota Twins: Hot off the wire: Joe Nathan, who has struggled this past week and is coming off back-to-back blown save opportunities, is being replaced by Capps as the closer in the Twin Cities. Control is often the last thing to rebound after Tommy John surgery, so unsurprisingly, Nathan has struggled in that regard thus far. Capps was a very effective replacement in 2010 and should be picked up and rostered in all formats.

Clayton Richard, SP, San Diego Padres: The 27-year-old southpaw is coming off a solid 2010 in which he won 14 games for the Padres and he makes half his starts in cavernous Petco Park. Yet his average draft slot this spring was 257.2 in Yahoo! drafts and he is currently owned in only 35 per cent of Yahoo! leagues. The question is why? In 14 2/3 IP so far this year, Richard has allowed 11 hits and four walks and has one win. He managed 153 strikeouts in 201 2/3 IP last year, so he’s certainly not Randy Johnson, but he warrants a bit more respect than he’s currently receiving.

Jonathan Herrera, 2B, Colorado Rockies: Herrera is currently one of the most added players over at Yahoo! and for good reason. He’s off to a terrific start, going 13-for-31 (.419), with two long balls and eight runs scored. What I find truly amazing is the fact he’s drawn 10 walks against only two strikeouts. The speed Herrera has flashed is very real, as evidenced by 134 thefts in 717 at-bats in the minors, and his strike zone judgment is also a proven commodity, but the power is an aberration. Jose Lopez and his .171 BA should be very concerned.

Bud Norris, SP, Houston Astros: Norris tossed a gem against the Padres on Thursday, fanning seven over six shutout innings. His ERA is still sitting just a pinch over five, but take a close look at the underlying stats. In 16 IP, Norris has amassed 20 strikeouts while allowing 13 hits and six free passes. In 2010 he managed 158 strikeouts in 153 2/3 IP and was a huge off-season target because of his breakout potential. That potential is still there, so buying in now would be a very prudent move.

Jed Lowrie, 2B/SS, Boston Red Sox: Red Sox Manager Terry Francona is shaking things up in Beantown and Lowrie is the beneficiary. He’s one of the few Red Sox players that’s hitting well, going 8-for-17 (.417 BA) so far. Lowrie is available in virtually every format and if you need even temporary help in your middle infield, he’s a solid acquisition.

Josh Tomlin, SP, Cleveland Indians: The 26-year-old Tomlin is now 3-0 to start the 2011 campaign and is facing a tough matchup this coming week against the Royals (yes, I just used the terms “Royals” and “tough matchup” in the same sentence.) Tomlin’s low strikeout rates have me concerned, but how can you argue with his success thus far in 2011?

Jeff Francis, SP, Kansas City Royals: It’s hard to believe we are actually looking at Kansas City for pitching help, but so far this year Francis is demonstrating the form he displayed way back in his early years in Colorado. Three quality starts in which he’s allowed only three walks in 20 2/3 IP should have your attention.

Sam LeCure, SP, Cincinnati Reds: LeCure is coming off a dominating performance against the Padres, allowing only one hit over six IP with eight strikeouts. His success has presented an interesting dilemma for Cincy Manager Dusty Baker with the imminent return of both Homer Bailey and Johnny Cueto from the DL. Keep a close eye on what happens with LeCure’s next start and the line-up juggling that will be occurring in Cincinnati in the next week.

Hank Conger, C, Los Angeles Angels: The sweet-swinging Conger is back on the radar after three consecutive starts. Jeff Mathis is not the long-term answer for the Halos from an offensive perspective. In 21 at-bats, Conger is batting .286 with two homers and five RBI, so go ahead and get him rostered in AL-only formats for now and monitor this position battle very carefully over the next several weeks.

Wilson Ramos, C, Washington Nationals: The 23-year-old Ramos is off to a great start, going 12-for-25 with two doubles and demonstrating why he was coveted by Washington in the 2010 deal that sent Capps to the Twins. The combination of Ramos’ skill and the fact that Ivan Rodriguez is closing in on 40, makes the youngster a must-add in all two-catcher and NL-only formats.

Conor Jackson, OF, Oakland Athletics: Remember this guy? A promising career was derailed by Valley Fever but it appears — at least early on — that Jackson could be on the verge of a return to form. From 2006-2008 he averaged 14 homers, 71 RBI, and a great .292 BA and is still only 28. RotoRob quickly identified that Jackson could emerge with value this year, especially given Oakland’s desperation for offense, so get him rostered in AL-only leagues and keep him on the radar in mixed formats pending his role and playing time opportunities.

Sergio Santos, RP, Chicago White Sox: With Ozzie Guillen threatening to put Bobby Thigpen on speed dial, nothing can be ruled out in the Windy City. Matt Thornton and Chris Sale have struggled badly thus far in 2011. Is Santos getting the next opportunity? You should also keep an eye on Jesse Crain in this situation.

Matt Lindstrom, RP, Colorado Rockies: Allowing oft-injured closer Huston Street to pitch three innings on April 8 does not make you the coldest beer in the fridge, Jim Tracy. What were you thinking? Lindstrom already has two saves while Street has been “resting.” Need I say more?

Desmond Jennings, OF, Tampa Bay Rays: The “retirement” of Manny Ramirez has generated much speculation about Jennings — a player many thought would be Carl Crawford’s replacement in the Tampa Bay outfield right out of the gate this year. Jennings is probably looking at a June recall, but if you have the bench space make the move now and beat the inevitable rush. In 32 at-bats at Triple-A Durham, he’s batting .313 with two homers, five RBI, eight runs scored and three thefts. The kid is making a statement, so make sure you’re listening.

Jamey Carroll, 2B/SS, Los Angeles Dodgers: The seasoned vet should provide value in NL-only leagues in both the stolen base and BA categories while Rafael Furcal rehabs his broken thumb for the next 4-to-6 weeks.

By Tim McLeod
This entry was posted on Sunday, April 17th, 2011 at 1:20 pm and is filed under BASEBALL, The Wire Troll, Tim McLeod. You can follow any responses to this entry through the RSS 2.0 feed. You can skip to the end and leave a response. Pinging is currently not allowed.