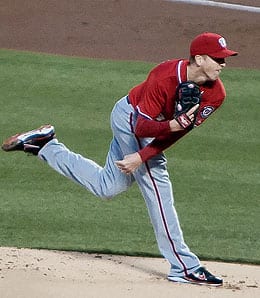 Why isn’t Tom Gorzelanny getting any Fantasy love?

It’s time to honour the special ladies in our lives that make life truly worth living. The bouquet of roses, the chocolates, breakfast in bed, or even just that extra acknowledgment that they are special should be in both our hearts and minds on Mother’s Day, and really each and every day. We all know if Mother is happy our whole world including the Fantasy component is also very happy, so don’t blow it, guys. After all, it is a very long Fantasy season and as tough as it is to believe your team and leagues will survive this one day, take a break and check the box scores Monday. This one’s for you, Kate — you’re simply the best! Without further ado, let’s take a look at this week’s Troll.

Eric Hosmer, 1B, Kansas City Royals (CBS: 69 per cent owned, Yahoo!: 33 per cent): There was absolutely nothing left for the 21-year-old Hosmer to prove at Triple-A Omaha. Three homers, 15 RBI, and an amazing .439 BA were enough to convince the Royals to bring one of their top prospects up and send Kila Ka’aihue packing to Triple-A Omaha. As difficult as it is to believe, the Royals are actually over .500 and contending in the AL Central, so this isn’t a ‘throw in the towel, let’s test out the kids’ move. Last week we’ve seen Hosmer’s ownership jump from 24 to 69 per cent in CBS leagues and we haven’t even given those weekly transaction leagues their opportunity to get in on the fun. Tempering your expectations from a power perspective, as RotoRob discussed Saturday might be prudent, but in leagues that use OBP as a stat category it simply won’t get much better. It’s time to burn the waiver wire priorities and spend the FAAB.

Scott Sizemore, 2B, Detroit Tigers (CBS: 14 per cent owned, Yahoo!: 5 per cent): The broken ankle that messed up Sizemore’s 2010 rookie campaign appears to be behind him. At Triple-A Toledo, he had slugged two homers, driven in 15 runs, and hit for an incredible .405 BA, prompting Detroit to recall him last week. Hitting in the two-hole for the Tigers, Sizemore should provide a decent spark for both Detroit and your Fantasy squad.

Tom Gorzelanny, SP, Washington Nationals (CBS: 13 per cent owned, Yahoo!: 4 per cent) After a shaky season debut, Gorzelanny has been nothing short of spectacular, going five consecutive starts where he’s allowed no more than two earned runs and has brought his ERA down to 2.87 with an incredible 0.90 WHIP. That he’s rostered in so few leagues is a testament to the non-believers. It is time to start believing.

Trevor Plouffe, SS, Minnesota Twins (CBS: 4 per cent owned, Yahoo!: 1 per cent): The 24-year-old former first rounder got the call last week for the Twins. In 78 at-bats at Triple-A Rochester, Plouffe mashed six homers with 13 RBI and a respectable .282 BA. Minnesota finally tired of Alexi Casilla and his .173 BA. Just remember there are plenty of moving parts currently in the Twin Cities and with Tsuyoshi Nishioka not that far away from returning, there will be more shifting in the Twins infield soon.

Homer Bailey, SP, Cincinnati Reds (CBS: 36 per cent owned, Yahoo!: 12 per cent): Bailey returned from the DL last week and shut down the Astros with a four-hit, one-walk, one-earned run and seven-strikeout performance. It was a great start for Bailey, justifying a new belief in his slider. It’s not like we haven’t seen flashes of brilliance in the past from Bailey, but there is always hope that the former phenom has finally figured it out and we’ll now see the consistency that has been sorely missing.

Franklin Gutierrez, OF, Seattle Mariners (CBS: 15 per cent owned, Yahoo!: 7 per cent): Gutierrez is currently knocking the dust off down at Triple-A Tacoma. Is this the week we see the return of the Mariners’ centre fielder? The rumour mill suggests it will be, and either way it would be prudent to make a move now and beat the rush. Mid-teen power and stolen base potential in your outfield could prove beneficial over the long haul.

Tyson Ross, SP, Oakland Athletics (CBS: 10 per cent owned, Yahoo!: 3 per cent): In his past two starts filling in for the injured Dallas Braden, Ross shut down the Angels and limited the hot-hitting Tribe (how weird does that sound?) to only one earned run. With Braden slated to be paying Dr. Yocum a visit, Ross — a 24-year-old righty — could be in for an extended stay in the A’s rotation.

Mike Fontenot, 2B/3B/SS, San Francisco Giants (CBS: 3 per cent owned, Yahoo!: 3 per cent) The injury to Pablo Sandoval has necessitated some juggling in the Giants’ infield with Miguel Tejada moving over to the hot corner and Fontenot now handling shortstop. In 53 at-bats, Fontenot has hit two homers with seven RBI, but — more importantly — appears to have playing time opportunities at a rather weak shortstop position.

Raul Ibanez, OF, Philadelphia Phillies (CBS: 41 per cent owned, Yahoo!: 30 per cent): The 38-year-old Ibanez finally shown some life last week smacking two homers with five RBI, snapping an 0-for-35 skid in the process. He isn’t as bad as we’ve seen so far in 2011 and appears to be heating up, so take advantage of his new approach at the plate while it’s paying dividends.

Kenley Jansen, RP, Los Angeles Dodgers (CBS: 7 per cent owned, Yahoo!: 4 per cent): Jonathan Broxton will be sidelined for at least the next 4-to-6 weeks with the bone spur in his elbow, and Vicente Padilla is currently the closer in Dodgertown. Hong-Chih Kuo is starting to round into form as he recovers from a wonky back that landed him on the DL earlier this season, but neither is a lock for success. Jansen was recalled to fill the roster slot and his domination (25 strikeouts in 14 1/3 IP) is intriguing. Find a home for him in leagues that track holds and keep him on the radar in all formats while the Dodgers sort out their bullpen woes.

Roger Bernadina, OF, Washington (CBS: 4 per cent owned, Yahoo!: 1 per cent): The right wrist sprain that sent Rick Ankiel to the DL has given Bernadina at least a short-term opportunity to display his wares. Given that Bernadina swiped eight bases in 63 at-bats at Triple-A Syracuse, he has the potential to be a short-term fix if you need a boost in that category.

Brandon Guyer, OF, Tampa Bay Rays (CBS: 2 per cent owned, Yahoo!: 0 per cent): Guyer was part of the haul the Rays received in the Matt Garza deal in the offseason. In 369 at-bats at Double-A Tennessee last year, Guyer hit 13 homers, drove in 58 runs, swiped 30 bags, and put together a stellar .344 BA. He slugged his first homer in his first at-bat against the Orioles and, with Sam Fuld in the midst of a horrific slump, Guyer is an intriguing option in both deeper and AL-only formats.

By Tim McLeod
This entry was posted on Sunday, May 8th, 2011 at 11:06 am and is filed under BASEBALL, The Wire Troll, Tim McLeod. You can follow any responses to this entry through the RSS 2.0 feed. You can leave a response, or trackback from your own site.