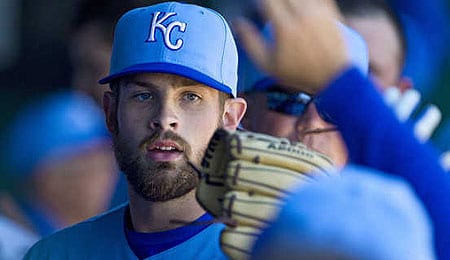 Aaron Crow is suddenly a serious shut-down reliever for KC.

While the Cleveland Indians just keep winning, the Kansas City Royals have dropped two of their past three and Ned Yost’s squad is now just 7-11 since jumping out of the gates so quickly. On the plus side, despite the recent losses, KC is 5-2 on its current homestand.

The offense has been great, but the pitching? Err, not so much. Led by rookie Aaron Crow (who is gaining traction in AL-only leagues, by the way), the bullpen (3.09 ERA) has been much better than the starting rotation (4.95, worst in the American League). On the bright side, in a few weeks, the team will likely begin to think about bringing up some of its massive surplus of fine young pitching prospects. There’s only so much Kyle Davies any team can take (although you’d think after allowing him to make 93 starts since 2007, the Royals might have figured out that he’s never going to pan out). Inconsistent Luke Hochevar may be on borrowed time as well, although if KC has been this patient with Davies, how long will it stick with a dude it blew the No. 1 overall pick on? And Jeff Francis hasn’t been fooling anyone in his last few starts.

While we’re panning the rotation, we should at least give a tip of the hat to Sean O’Sullivan, who has been a bit better than we predicted (we had him pegged as the 139th-best starting pitcher heading into the season). He pitched a career-high eight innings Friday, and while it was only against the putrid Oakland lineup, it’s worth noting that O’Sullivan has not surrendered more than three earned runs in any of his four starts since moving into the rotation a few weeks ago. His command stinks (and that is going to come back to haunt him at some point) and he definitely won’t help you in strikeouts, but the hit rates are good enough for you to give him a look in a deeper AL-only league, especially if it’s a 4×4 format.

Of course, the big story in KC is the arrival of Eric Hosmer this week. Our No. 12 prospect heading into the season made a mockery of Triple-A (a minor-league leading .439 BA with a .525 OBP in 26 games), forcing the Royals to recall him a couple of days ago.

He made his big league debut Friday, going 0-for-2 with two walks, two strikeouts and a steal. Needless to say, Hosmer has been one of the hottest waiver wire pickups in the past couple of days, as owners always love to jump on the hyped prospects. While he’s been compared to Joey Votto and will see action everyday at first base, owners need to rein in their expectations of what Hosmer is capable of. This kid’s going to be a star in time, but obviously his numbers in The Show won’t come anywhere near what he’s done in the minors. Still, it’s a very exciting time to be a Royal fan, and Hosmer is just the first piece of many future core components the club will soon be promoting.

Hochevar, meanwhile, will take the mound Saturday evening as the Royals look to square their series against Oakland. I don’t like his chances; he’s 0-5 in his career against the A’s and has been torched for 27 runs in 24 IP. Oakland’s offense stinks, but you better be in a pretty deep AL-only league if you’re throwing Hochevar out there tonight.

In the bullpen, we need to give a shout out to rookie Tim Collins, who has hurled five straight scoreless outings and has an impressive 21 strikeouts in 18 1/3 IP with two wins and two holds. Unfortunately, he’s also issued 17 walks, and that’s probably going to prohibit him from working his way into a more prominent set-up role. He’s worth a look in extremely deep AL-only leagues, and if he can harness his stuff (his walk rates in the minors were generally much better – not stingy, but much better), then look out. In Double-A last season, Collins struck out 73 batters in 43 IP. This youngster has future closer potential.

Matt Treanor has gotten the majority of the playing time at catcher so far this season, but really it’s been a value-killing timeshare with Brayan Pena. Then again, neither of them can hit, so even if one of them was getting three-quarters of the starts or more, they still would have almost no value. For what it’s worth, Treanor has walked in four straight games, reaching safely in six straight. Hey, at least he’s getting on base. Better yet, he gets to go home every night and pork this fine piece of tail, so he gets Fantasy value points of an entirely different nature.

By RotoRob
Tags: Kansas City Royals
This entry was posted on Saturday, May 7th, 2011 at 3:05 pm and is filed under BASEBALL, RotoRob, Team report. You can follow any responses to this entry through the RSS 2.0 feed. Both comments and pings are currently closed.