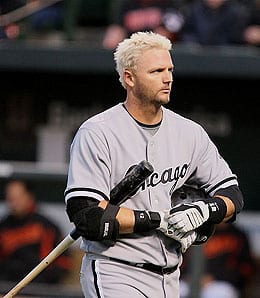 A.J. Pierzynski is swinging the bat well lately, and it’s a trend that could continue.

I’ve been caught up in some incredibly exciting NHL and NBA playoff action the past few days, but I thought it was high time that I checked in with some observations from around the diamond.

The White Sox got swept in Detroit this weekend, but they weren’t just beaten – they were humiliated 21-3 over the three games, getting shut out the last two games and running their current skid to 10 losses in 11 games. Things don’t get any easier with a four-game set on tap in New York against a Yankee team that’s in first in the AL East and has played quite well lately.

Manager Ozzie Guillen has been taking things in stride, relatively speaking, but I’ll be watching closely because you have to know some form of a meltdown is coming – it will be highly entertaining.

The White Sox failed to get a hit in the first five innings on Saturday, and on Sunday again found themselves with a goose egg in the hit column through four innings. A.J. Pierzynski led off the fifth with a single, and he wound up being one of just two Chicago hitters to manage more than one hit Sunday as the team only had five hits for the game. No doubt John Danks was thrilled about that (more on this below).

Pierzynski has now hit safely in seven straight games (twice getting multiple hits in that stretch), raising his BA over 50 points to .275 in the process. The best news is that you can expect that BA to continue to rise. One of the reasons Pierzynski’s average was so putrid for most of 2010 was because his BABIP was unusually low. And so far this season, it’s only been one point higher (.279), still well below his career rate of .301. That means he’s bound for a correction soon, so it wouldn’t be surprising at all to see him wind up around .290, maybe even .300, by season’s end.

His contact rates have been off the charts so far, with just a pair of strikeouts through 69 at-bats and the veteran continues to be one of the most loved athletes in his home ballpark and one of the most reviled players everywhere else.

It’s nice to see him avoid the horrific start to 2010 he endured, and while he has yet to flash any power this season, he’s playing almost every day, so that makes him worth rostering in AL-only leagues. A catcher capable of hitting close to .300 definitely has value, so even if his modest power doesn’t bounce back, Pierzynski isn’t a bad buy-low candidate.

We ranked Pierzynski as the 17th-best catcher to own heading into the season, but right now he’s not providing that value, which is another reason to consider him a decent buy-low. In fairness, we don’t envision him being a useful asset in mixed leagues, but he should be a fine catcher for AL-only league owners before all is said and done.

The veteran continues to be his usual fiery self, getting thrown out of a game last week against the Rays after a bit too much yapping to the home plate umpire after one of his at-bats. Hey, it’s nice to see some things never change, right?

Detroit, which seems to own the Sox lately, having beaten them nine straight times, has turned things around after a sluggish start and is now tied with the Royals for second in the AL Central.

Rookie outfielder Casper Wells had a nice game in the series opener, but he was hitless in his only at-bat Saturday and stunk it up Sunday, going 0-for-4 with three strikeouts. In fairness, it was the first time this season Wells has struck out more than once in a game. He’s getting the lion’s share of starts in right field, but the Tigers have really been spreading out the PT in the OF, so in reality he’s playing little more than a reserve would play.

Wells hasn’t done enough yet to be worth considering in anything but a very deep AL-only format, and he’s never going to hit for a high average, but there are two reasons he intrigues me. Number one is his power potential: Wells smacked 21 homers in less than 400 at-bats in Triple-A last season. Secondly, who can you refuse to add someone named Casper to your team? Honestly, sometimes a player has a name that’s so cool you can’t help but root for them and in such a case, it’s almost worth wasting a roster spot on him. Almost.

By RotoRob
This entry was posted on Monday, April 25th, 2011 at 12:08 pm and is filed under BASEBALL, MLB Today, RotoRob. You can follow any responses to this entry through the RSS 2.0 feed. You can leave a response, or trackback from your own site.