The Wire Troll: The Return of Daisuke Matsuzaka 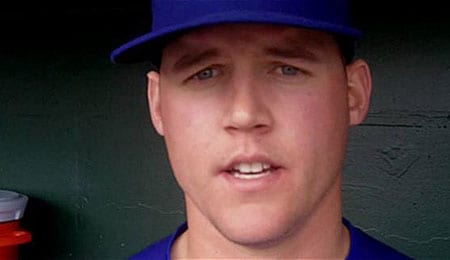 Jerry Sands, one of the game’s top prospects, has arrived in The Show.

It’s Easter weekend and hopefully the Easter Bunny brought you all sorts of treats from a Fantasy perspective. Hopefully they included one of the late-round gambles or waiver wire adds at the catcher position. Russell Martin hit two homers Saturday — a three-run shot and a solo blast — bringing him to six big flies, which already tops his 2010 total. Nick Hundley and Alex Avila, both after-thoughts in many draft this season are both currently ranked among the top 10 catchers. The concept of picking up catchers early as a draft strategy is one that will generate plenty of discussion in the 2011 hot stove leagues. But enough about the trials and tribulations behind the plate, let’s take a look at some of the waiver wire options heading into Week Four.

Daisuke Matsuzaka, SP, Boston Red Sox: What an incredible week for the Dice Man. In the course of one week, he went from the verge of losing his rotation slot — and possibly his home in Boston — to being a Fantasy stud. Allowing no runs, just two hits and four walks while striking out 12 in a pair of wins in a week will accomplish that for a starter. His past two starts have been as dominant as anything we’ve seen since the Sox signed him back in 2006 and his next start is against Jason Vargas and the enemic Seattle offense so he’s a great play for even the strongest of doubters. Dice K’s shoulder has more miles on it than I’ve consumed gummy bears, but based on his recent results he simply has to be rostered in all formats.

Jerry Sands, OF, Los Angeles Dodgers: In a bit of a surprising move, he Dodgers recalled one of their top prospects last week. Sands is coming off an incredible 2010 during which he smacked 35 homers, drove in 93 runs, stole 18 bags and hit .301 BA between Class-A and Double-A. He was off to a hot start at Triple-A Albuquerque this season, with five homers and 17 RBI in 40 at-bats. The question is after only 40 at-bats at Triple-A is Sands ready and will he stick on the big league roster or be like Brandon Belt and struggle only to find himself back in the minors? Either way Sands is going to be the “hot” stick on this week’s wire and when your competition for playing time is Marcus Thames, Tony Gwynn, Jr. and James Loney with his 403 OPS, the opportunity for at-bats will be there — at least in the short-term.

Mitchell Boggs, RP, St. Louis Cardinals: As we mentioned back in Week One of the Wire Troll, Ryan Franklin’s days were numbered and his horrific start this year finally forced Tony La Russa’s hand. Boggs got the call and has gotten the job done in both his save chances so far. If you need saves, spend some of that FAAB cash this weekend on Boggs as we’re betting on a long, successful run in his new role in St. Louis.

Freddie Freeman, 1B, Atlanta Braves: It’s time to give your waiver wire a scan just in case someone in your league gave up and cut bait on Freeman. In his past 10 games, he’s smacking the ball to the tune of a .357 BA with three homers and six RBI, while displaying the skills that made him one of the top pre-season candidates for NL ROY honours. Freeman should be owned and active in all formats heading into Week Four.

Ty Wigginton, 1B/2B/3B, Colorado Rockies: The Rockies finally tired of the struggling Ian Stewart and sent him and his .077 BA packing to Triple-A, where he’ll try to regain his stroke. Wigginton qualifies virtually everywhere in the infield and has hit 20 plus homers in four of the past five seasons, so he’s a solid option for both the Rockies and your Fantasy squad while Stewart attempts to work through his problems down on the farm.

Ryan Roberts, OF, Arizona Diamondbacks: Roberts earned a spot on the Diamondback roster with a strong spring and hasn’t looked back. The kind of numbers he’s put up sof ar (four homers, 11 RBI, two thefts and eight runs scored with a .340 BA) will guarantee playing time. If you need to replace one of the many outfielders currently on the DL, Roberts is an intriguing choice — at least on a short-term basis.

Darren Oliver, RP, Texas Rangers: In a rather surprising move, Texas placed stud closer Neftali Feliz on the DL with an inflamed right shoulder. The Rangers clearly showed their hand Saturday with veteran lefty Oliver picking up the save against the Royals. It is still early and the prognosis on Feliz’s return is still up in the air so a move on Oliver will at least provide you with save opportunities until the extent of Feliz’s injury is known.

Cody Ross, OF, San Francisco Giants: Ross’ DL is done, Belt is back at Triple-A and yet Ross is owned in only 25 per cent of CBS leagues. Other than his great playoff run last season, Ross has been a disappointment, failing to build on his solid 2008 and 2009 seasons. Still, he has the job and the potential to be an asset in deeper and NL-only leagues.

Ryan Vogelsong, RP/SP, San Francisco Giants: Barry Zito has found his way onto the DL with a foot injury, prompting the Giants to call up Vogelsong last week. Remember him? Originally drafted by the Giants, he was traded to the Pirates in the Jason Schmidt deal in 2001. After spending three years in Japan and bouncing around in the minors last year, Vogelsong has now come full circle. He was off to a great start at Triple-A Fresno, going 2-0 with a stellar 1.59 ERA and 17 strikeouts in 11 1/3 IP. Vogelsong’s ability to rack up Ks has never been questioned; his ability to consistently find the strike zone is another topic of discussion.

Scott Cousins, OF, Florida Marlins: The hot-hitting Logan Morrison has hit the DL for the next 2-to-4 weeks with a left lisfranc sprain and the bulk of his playing time in Florida will go to Cousins. In 410 at-bats at Triple-A New Orleans last year, Cousins put up 14 homers, 49 RBI, 12 thefts and a solid .285 BA. He’s undoubtedly a temporary fix for the Marlins, but one that could provide relief in NL-only leagues until the return of LoMo.

Frank Francisco, RP, Toronto Blue Jays: The oft-injured Francisco returned from his most recent DL stint last week to find the closer slot being occupied by Jon Rauch. The favourite to earn saves for Toronto heading into 2011, Francisco looks like he’ll be returning in a set-up capacity, but don’t be surprised to find him working his way back into the mix for save chances in the near future. Picking up Francisco now could pay dividends down the road.

Darwin Barney, 2B, Chicago Cubs: Cubs Manager Mike Quade likes what he’s seeing out of Barney so far this year, and with good reason. The 25-year-old Barney is off to a great start and is making a case for hitting in the two hole for the Cubbies. His power potential is minimal at best, but he’s scored 10 runs, driven in another 10 and put up a great .323 BA hitting behind Starlin Castro, and that will get it done at middle infield in any format.

Charlie Furbush, SP, Detroit Tigers: Here’s a name for those of you in deep Dynasty and AL-only formats. Furbush caught the attention of the Tigers hierarchy this spring and has been as good as it gets so far at Triple-A Toledo this season. The southpaw is coming off a dominant seven inning, one-hit shutout lowering his ERA to 1.62 ERA with 21 strikeouts in 16 1/3 IP. The back end of the rotation in Detroit is anchored by Rick Porcello, Phil Coke, and Brad Penny making the odds high that there will be future opportunities for Furbush in the Motor City. Besides, we’ve been waiting for the chance to include him in this column for about two years since buying this jersey.

By Tim McLeod
This entry was posted on Sunday, April 24th, 2011 at 3:15 pm and is filed under BASEBALL, The Wire Troll, Tim McLeod. You can follow any responses to this entry through the RSS 2.0 feed. You can skip to the end and leave a response. Pinging is currently not allowed.