The Wire Troll: After the Love is Gone 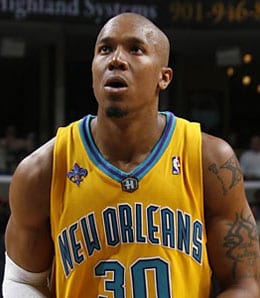 David West is one of several Fantasy studs that is done for the season.

Welcome to the Week 23 edition of the Wire Troll, our weekly look at players that may be available on your league waiver wire, but could see a spike in Fantasy value due to a variety of circumstances.

Fantasy playoff time is here, and if you’re in a head-to-head league and still care about basketball, then congratulations for remaining in the hunt. The difference between getting there and getting over, though, is often discovered within the depths of the league waiver wire, and that. Of course, is what the Troll is all about.

Injury news dominated the Fantasy landscape this week, as standout forward David West and Fantasy uber-stud Kevin Love both went down with serious ailments. West’s torn ACL will sideline him for the rest of the season and beyond, while Love’s injured groin (man, it hurts just to write that) may keep him out of action for the duration; it’s not like the T-Wolves have anything left to play for, after all. The Spurs’ Tim Duncan is out with a sprained ankle, but his stats are being absorbed by three different players at this point, thus neutralizing any potential Fantasy relevance. These injuries have derailed many a Fantasy championship dream, but from chaos comes opportunity, and the savvy Fantasy owner can minimize his losses by working the waiver wire to best advantage. Savvy Fantasy owner? Why, that sounds like you, doesn’t it? Thought so — read on.

Ekpe Udoh, Golden State Warriors: The Warriors are hopelessly out of the playoff picture (imagine that) and head coach Keith Smart appears to be committed to taking a long look at players like Udoh. Over his last four games, the rookie has played at least 29 minutes — while averaging 10.5 points, 4.5 rebounds and an outstanding 2.8 blocks. If you’re short on swats, consider grabbing Udoh for the stretch run… but be aware that he is still very much a work in progress, and his playing time could evaporate quickly if Smart decides to try out something else.

Anthony Randolph, Minnesota Timberwolves: Fantasy man-beast Kevin Love may be out for the season with his groin injury, but desperate Love owners need look no further than their man’s understudy to find potential Fantasy salvation. In his first two games as a starter, Randolph has been an absolute monster, averaging 27.5 points, 13 rebounds, 1.5 steals and 1.5 blocks. You know the drill with Ant-Rand: it’s never been about his tools, rather about his focus and attitude. If — and I don’t have a big enough typeface to represent how big of an “if” that really is — Randolph can keep his head in the game, he has a chance to be a difference-maker in countless Fantasy playoffs this season. You’d better move fast, though, as Randolph is a hot pick-up right now.

Carl Landry, New Orleans Hornets: The loss of David West for the remainder of the season opens up playing time for Landry, and of course the Troll never misses an opportunity to give Cool Hand Carl some love. In his first game starting in West’s stead, Landry racked up 19 points, six rebounds and three steals in 30:42 of playing time. New Orleans is currently in the driver’s seat for one of the final two playoff spots in the Western Conference, but their margin for error is not so great that they can afford to tinker with the lineup. That means heavy minutes for Landry the rest of the way, so if Cool Hand is available in your league, grab him…and for those of you who don’t know why we call him Cool Hand Carl, here you go.

Carlos Delfino, Milwaukee Bucks: Very few NBA players can rack up the stats as quickly as Delfino when he’s on a roll, and lately he’s been on an absolute tear. Before his eight-point dud (and yes, he’s known for those, too) Friday night, Delfino had averaged 28.7 points, 6.3 (that’s right – six point three) treys, seven boards, and 2.3 steals over his past three games. He can go cold faster than a tenement faucet in winter, but if Delfino’s shot is falling he can pile up stats at an elite level.

Tony Allen, Memphis Grizzlies: Allen has been a solid Fantasy contributor over the past month and a half, but the worry was that he would lose playing time when Rudy Gay returned to the lineup. Now that that’s not going to happen this season, Allen should be a fine source of points and steals the rest of the way. Since the All-Star break, Allen has averaged 13 points, 3.8 boards, 2.1 assists and 1.8 steals per outing – while shooting 53.8 percent from the floor and 82.3 from the stripe. He has collected only four treys on the season, but Allen’s multi-category Fantasy contributions should find a place in just about every league going forward. If Gay was dropped in your keeper league, he makes a great (and sneaky) add, as he projects to be at least a top-50 Fantasy player next season.

Tyreke Evans, Sacramento Kings: A foot injury had sidelined Evans since Feb. 13, but he knocked down six points and dished eight dimes in just 17 minutes Friday night, and figures to see more playing time as he re-acclimates to game speed. Evans is still widely owned, but if he was dropped in your league now is the time to act. Many Fantasy owners have abandoned their hoops teams and are in full “baseball mode”, and there’s no reason that you can’t capitalize on their lack of vigilance.

By Buck Davidson
This entry was posted on Saturday, March 26th, 2011 at 2:11 pm and is filed under BASKETBALL, Buck Davidson, The Wire Troll. You can follow any responses to this entry through the RSS 2.0 feed. You can leave a response, or trackback from your own site.