The Wire Troll: Torrey Mitchell Starting to Turn it On 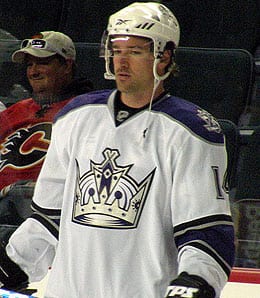 Justin Williams is the latest key player to go down in the Season of the Injury.

Sometimes there is no time for chit chat. Let us be honest, there are not that many players that can be claimed that will help your Fantasy teams over the final couple of weeks. Most owners have gotten to this point for a reason. Their teams really are that good and, yes, they are a bit lucky too.

With two weeks left, what else is there to say? It has been a fun season giving readers tips on who to snipe off their wavier wire and for the most part, we have had some very solid success. It is not about being flamboyant with your picks here, but just giving the best information we can. A special thanks goes out to everyone that makes this little column possible and I would also like to commend fellow RotoRob writer Buck Davidson for doing such a great job on the basketball version of the Wire Troll.

Just think of what this season has brought to Fantasy hockey owners. There have been more significant injuries than I can ever remember. Why? This is because there never has been a year like this in the history of Fantasy hockey. Did anyone ever expect Sidney Crosby to get knocked out for the rest of the regular season? I bet not. Did anyone expect Zach Parise to miss a ton of time or the New Jersey Devils to struggle so mightily over the first half? There has been unexpected development after unexpected development.

Now what do we do here for picks this week? The reality is that there is not much left, honestly. However, small tweaks can be key, barring catastrophic injuries. By catastrophic, we mean any injury for your Fantasy team that causes a player to miss two weeks or more, right Justin Williams (out 3-to-4 weeks with a shoulder injury)?

Preamble aside, it’s time to get to this week’s Fantasy hockey waiver wire recommendations.

Torrey Mitchell, C, San Jose Sharks: Well, Mitchell has scored a few goals lately and at the very least is a decent pickup in deep leagues as a guy like him is perfect for goals in this run to the playoffs. If he sees some time with the likes of Ryan Clowe and Joe Pavelski, do not be surprised. That will only boost Mitchell’s scoring potential and it could be a big week for him so keep an eye out as he is owned in less than 10 per cent of all leagues. The buzz will be high.

Cory Schneider, G, Vancouver Canucks: What you need to know about Schneider is that I believe he is at least as good or may be better than Roberto Luongo. Simply put, he knows how to play on a team that has an awesome cast and has proven he can thrive in the playoffs. See the Manitoba Moose a couple years back in the AHL for a prime example of that. With Vancouver almost ready to clinch the President’s Trophy for the NHL’s best overall record, expect the backup netminder to get quite a few starts the rest of the way. Get Schneider today while you can before his ownership percentages shoot up in your leagues.

Johan Hedberg, G, New Jersey Devils: Hedberg is another example of a goalie that will see some extra work now. but in this case it’s because New Jersey is out of the playoff hunt. Out of the final eight games, you may see him play four, five or or even more times. So you may want to think about adding Hedberg quick before others hop on, assuming they haven’t done so already.

Next week we will spotlight three more players and maybe a few more if conditions warrant it, so good luck in your leagues and soon it will be all over. That is hard to believe, isn’t it?

By Chris Wassel
This entry was posted on Sunday, March 27th, 2011 at 4:33 pm and is filed under Chris Wassel, HOCKEY, The Wire Troll. You can follow any responses to this entry through the RSS 2.0 feed. You can leave a response, or trackback from your own site.