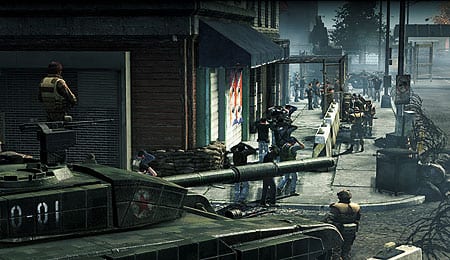 Homefront’s strong concept never pans out the way it could have.

THQ cranked up the hype meter on Homefront in the days and weeks leading up to its release, focusing primarily on the game’s story and describing it as taking place in a “terrifyingly plausible near-future world.” There’s little doubt THQ’s marketing blitz, combined with the involvement of writer John Milius (who worked on Apocalypse Now and Red Dawn) piqued interest, but does Homefront’s tale of an occupied America truly resonate?

Assuming you’ve played Call of Duty, everything should feel right at home down to the click sticking to sprint and melee. Aiming sensitivity is well tuned and grenades fly a reasonable distance. There’s nothing to complain about here.

Set in the town of Montrose, Colorado, Homefront tries to drive home an emotional impact that this could be any small town in America. At points it succeeds, such as the opening sequence on the city’s main street where you’re given a sense of people’s plight and desperation. Unfortunately, it’s unable to sustain that impact amid a sea of bottlenecked firefights that are so linear and packed with obvious cover points that they never feel organic.

From a technical standpoint, Homefront looks outdated when compared to other recent Triple-A shooters like Crysis 2 and Killzone 3. It’s not an ugly game, but you’ve seen titles on par with this that came out years ago. It’s particularly noticeable with character models that are seemingly unable to convey any semblance of emotion through facial expressions. Lip synching is sketchy as well. These are two issues that seem magnified in a game that wants you to invest emotionally.

There are also plenty of little things that just pull you out of the experience, like climbing a ladder without visible hands or enemies that seem to magically appear from behind cover rather than standing up. The frame rate holds up for the most part, though there were some instances when a destroyed object would suddenly flash to its intact state and back again.

Everything on the audio side (voice acting, music, sound effects) falls into the workmanlike category where nothing is truly bad and yet nothing really stands out, either. Again, though, in a game where story and ambiance were heavily featured, you have to feel developer Kaos Studios missed out on the chance to include some dialogue that would add a real impact to the game.

It’s 2027, and the world as we know it has gone to shit. The economic collapse of the United States has afforded an opportunity for a newly unified Korea (operating as the Korean People’s Army) to invade after using an EMP blast to disable U.S. machinery. Occupying American soil isn’t enough for the KPA, however, as it’s routinely inflicting atrocities on the civilian populous.

While it’s natural to seek parallels to Red Dawn given Milius’ background, the setup actually feels very similar to Terminator Salvation — just replace the machines with Korean soldiers — right down to the main resistance fighter going by the name Connor and radio broadcasts where the only thing missing is the sign off line, “If you are listening to this, you are the resistance.”

As the backdrop for an emotionally-charged shooter, it’s a winner, and there are some interestingly thought out secondary details that can be viewed in news clippings found throughout the campaign to flesh out the main story. Unfortunately, the story’s potential is never fully realized primarily because of a lack of character development and a “been there, done that” feel to both the combat and the missions themselves.

You play as Robert Jacobs, a former Marine Corps helicopter pilot who is rescued at the game’s onset by American resistance forces to assist with a special mission. Homefront stays true to the premise that you’re a new recruit by allowing more experienced resistance members to drive the story forward, which results in you following someone else nearly the entire time.

This mechanic leads to some really awkward pacing as you’ll frequently find yourself simply standing around waiting for the friendly A.I. to push an object out of your path, breach a doorway or climb down a ladder. Your teammates also have a tendency to claim the choicest cover points, leaving you (the only character that can die) to engage waves of materializing foes from less than ideal vantage points.

Ah, magically appearing foes. If Homefront’s visuals are somewhat dated, then watching enemies literally materialize out of thin air is borderline antique. Nearly all of the game’s large scale battles utilize the vintage “enemy jar” approach, oft times waiting for some scripted event like an explosion to conclude the engagement. It’s pretty frustrating to clear a path to a location by sniping a dozen men only to see another group magically rush in to take their exact places.

Beyond the linear “follow the leader” missions, the overall length of the campaign is sure to raise more than a few eyebrows as well. With a single-player mode that spans just seven chapters you can comfortably finish the game on normal difficulty in roughly four hours, which includes all that aforementioned time spent waiting around to advance.

Given THQ’s focus on pushing the campaign, it’s surprising that Homefront saves its best for online multiplayer. Highlighted by a “Battle Point System” that allows you to spend points you earn during rounds to do things like upgrade equipment and purchase vehicles, online does a nice job of rewarding players for more than just killing. Capturing (and subsequently defending) a point nets you some nice bonuses, as does saving a teammate in a firefight. Combine that with the strategic element of deciding when and how your points are best spent and you’ve got a nice alternative to the usual suspects.

Another way Homefront differentiates itself online is the size of the battlefield. Yes, the game shipped with just seven locations, but they’re all huge and allow for persistent and changing areas of engagement — what was a hot spot 30 seconds ago is suddenly abandoned. The downside of such large maps is that it can feel like you’re spending too much time sprinting from your spawn point to where the action is.

While multiplier is undeniably addictive, there are some drawbacks. Lag and outright freezing continue to pop up even as THQ scrambles to add more servers. The bigger issue, though, may prove to be a lack of long-term variety given the small number of maps and game types available. With Call of Duty beckoning wayward gamers to return, it’s tough to say how much staying power this game has.

In many ways Homefront is a victim of a marketing machine that overhyped a flawed experience, forcing the game’s strongest element to get second billing. It’s a solid title, but it doesn’t offer enough to stand out in a genre that seemingly has a new release every week.