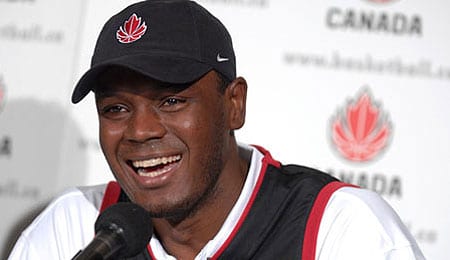 Welcome to the Week 22 edition of the Wire Troll, our weekly look at players that may be available on your league waiver wire, but could see a spike in Fantasy value due to a variety of circumstances.

The NBA season is nearing the top of the home stretch, and Fantasy owners — especially those in head-to-head leagues — are feverishly working the wire in hopes of landing that hidden gem that will carry them to championship glory. This time of year, it’s important to pay heed to the NBA standings, as there are several teams out there that are entering full “play the kids” mode. It’s those kids — and we feature one of them this week — that can turn the tide of fortune in your favour.

Meanwhile, the NCAA Basketball Tournament is in full swing, and already we’ve seen our share of blowouts, upsets and March memories. Some new heroes will rise to the occasion, and indelibly stamp the images of their greatest moments on our collective consciousness. They will be hard-pressed, though, to match the Troll’s choice for greatest NCAA tournament moment ever… and of course, I cannot let an NCAA discussion pass without rolling a video montage of the best that’s ever been. Happy March Madness, everyone.

Chuck Hayes, Houston Rockets: He may be ridiculously undersized at just six-foot-six inches, but Hayes has been a rebounding machine of late — and a pleasant Fantasy surprise all season long. In his last 12 games, Hayes has yanked down an average of 10.9 boards per night, and has posted 8.5 points, 3.5 assists and one steal per game since the All-Star break. Don’t look for double-digit points or big-time block numbers from Hayes, but he should be banging the boards with the best of them for the balance of the season.

Samuel Dalembert, Sacramento Kings: Sammy D has been on one of his rolls lately, averaging 16.3 points, 11.8 boards and 1.5 blocks over his past four games. One caveat here: that lofty points total is buoyed by a career-high 27-point effort on Monday, so don’t expect double-digit scoring on a nightly basis from the defensive-minded middleman. Boards and swats are Dalembert’s game, and right now he’s providing plenty of both.

Francisco Garcia, Sacramento Kings: Garcia is one of those players that drifts in and out of Fantasy relevance several times during the season, and right now is one of his “in” moments. Since returning from injury in early March, he has averaged 12.1 points, 1.8 three-pointers and 1.4 steals — while shooting over 47 per cent from the field and 93 per cent from the stripe. Omri Casspi could still erode some of his playing time, but as long as he stays hot, Garcia should remain in the starting role. Grab him if you need treys, as he is one of the bombers that provides help from beyond the arc while not killing your team’s field-goal percentage.

C.J. Miles, Utah Jazz: Miles has been on a remarkable run lately, but is somehow still available in 50 per cent of Yahoo! leagues and 75 per cent of ESPN formats. In 12 games since the break, he has averaged 15.4 points, 1.4 treys, 3.9 boards, 1.8 assists and 1.0 steal per game. Raja Bell and Andrei Kirilenko are both dealing with health issues, and neither has been particularly effective, so Miles should see plenty of minutes at the two and the three the rest of the way. If C.J. is out there, run — do not walk — to your league wire and grab him.

Jordan Crawford, Washington Wizards: Crawford was the Nets’ first-round pick (27th overall) in the 2010 NBA draft, then was traded to Atlanta on draft night. He arrived in Washington at the trade deadline as part of the Kirk Hinrich deal, but was largely an afterthought until injuries decimated the Wizards’ backcourt. With Nick Young sidelined the past two games and John Wall slowed significantly, Crawford has stepped to the fore, averaging 20.4 points, 3.4 assists and 1.4 steals over his past five games. Crawford’s Fantasy value is tied to Young’s health status, but it is worth noting that Crawford was seeing increased minutes even when Young was at full speed. With the Wizards hopelessly out of the playoff hunt, it makes sense to give Crawford plenty of NBA run, so he’s worth adding in deeper formats.

Jodie Meeks, Philadelphia 76ers: The Philly backcourt has been a carousel of sorts this season, but Meeks has been riding the lead horse since the All-Star break. In those 13 games, he has averaged 13.3 points and a ridiculous 2.5 treys. He’s shooting a stellar 42.3 per cent from downtown during that period, and over 41 per cent for the season. Meeks won’t help much with assists, but his sharpshooting skill makes him a fine Fantasy option if you’re in need of points or treys.

By Buck Davidson
This entry was posted on Saturday, March 19th, 2011 at 6:28 pm and is filed under BASKETBALL, Herija Green, The Wire Troll. You can follow any responses to this entry through the RSS 2.0 feed. You can skip to the end and leave a response. Pinging is currently not allowed.