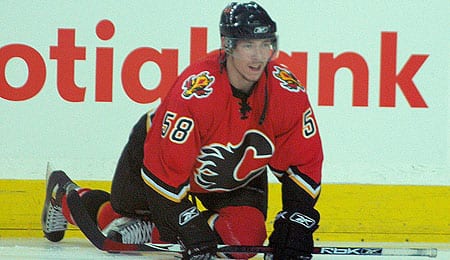 David Moss is starting to turn it on for the Flames.

This time of year, the search is on for the lowest of the low in waiver wire pickups. It gets tougher and tougher when the playoffs approach. Depending on your league, Fantasy playoffs are either next week or the week after. Digging deep, the goal is to help your team try to make its push or solidify a spot in your playoffs. These short term moves can make a difference if timed just right.

Hopefully, we can help the Fantasy hockey owner catch a few lucky breaks. At this time, when injuries are running wild and the Sidney Crosby effect is beginning to be felt in earnest, the time to shovel is now.

Let’s go into the nether regions of the waiver wire, shall we? It is time to do this right. Welcome to the Wire Troll: Deep Sea Version.

David Moss, C, Calgary Flames: With three goals in his last five games, Moss is surprisingly worth a pickup. Add in 10 points in his last 13 games and that looks even better. Quietly, the Calgary centre has put up a respectable 29 points this season. No one really ever knows when the music will stop but Moss has been elevated into the Top six for the Flames of late and that may pay more dividends (on Friday, he even saw some time on the top line with Jarome Iginla and Alex Tanguay). Moss is only owned in 1-to-2 per cent of Fantasy leagues on average and in some cases less than 1 per cent. It cannot hurt to take a shot.

David Desharnais, C, Montreal Canadiens: Desharnais has almost come out of nowhere to post 10 points in his last 11 games including a four-game point scoring streak during which he’s put up seven points. Here is a guy that is only owned in 2 per cent of leagues but has received increased ice time and has shown himself to have a pretty good knack of being in the right place at the right time. If you are looking real deep, Desharnais is someone to get on your squad before your playoffs start.

Marty Reasoner, C, Florida Panthers: Despite the bad times in Florida as the Panthers will likely miss the playoffs for the 10th straight season, Reasoner is quietly putting up some solid numbers of late. He has posted seven points in his last 11 games and his near 55 per cent faceoff win percentage is good for 19th in the NHL, yet he is still owned in only 1 per cent of Fantasy leagues. There is not much for hope in Florida but if you need a faceoff specialist and maybe a third or fourth centre, Reasoner may be just the guy here.

Marek Svatos, RW, Ottawa Senators: This is one to take a real flyer on. Every so often, there is one guy to just take a shot and Svatos is capable of going on short term streaks. He is starting to get used to his new teammates and once he puts in one, there is the feeling he could post some decent numbers. Since Svatos is owned by less than 1 per cent of Fantasy owners, it is not like you are taking much of a risk here. Injuries have decimated teams so sometimes digging this deep is purely harmless.

Next week we will dig nearly as deep with more adds that you will need for your Fantasy playoffs. We thank Dan Offerdahl for all of his help as always and good luck in your Fantasy leagues. See you next week with a new edition of The Wire Troll. Fire away with your questions using our Fantasy Question? form in the left sidebar or in the comments section and thanks again.

By Chris Wassel
This entry was posted on Sunday, March 6th, 2011 at 1:24 pm and is filed under Chris Wassel, HOCKEY, The Wire Troll. You can follow any responses to this entry through the RSS 2.0 feed. You can leave a response, or trackback from your own site.