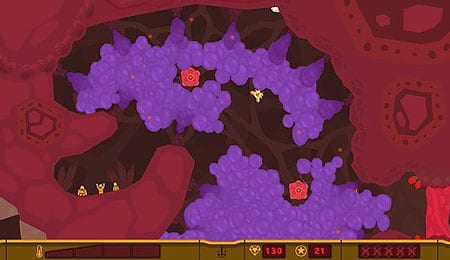 It looks like this giant belly has a really bad case of indigestion.

Editor’s note: This is the site debut for Uma Smith, our newest video game reviewer. Please help me to welcome her to the site.

Developer Q-Games has released a series of downloadable titles for the Playstation Network called PixelJunk, games known for their simplicity, creativity and artistic quality. Gamers quickly became fans of the series and have been demanding more ever since. Luckily, their appetites have been satiated with the recently released PixelJunk Shooter 2, which is a sequel to 2009’s game involving a subterranean ship rescuing trapped scientists while fighting off enemies. The first go-round was a success, but will this follow-up shoot its way into gamers’ hearts as well?

PixelJunk Shooter 2 is a twin-stick shooter, meaning the layout of the controls is simple and easy to master. The left stick moves your ship while the right controls your aim. Rotating the right stick makes your ship spin, allowing you to suck in nearby coins. Pressing R1/R2 shoots, while holding them down launches missiles. The L1/L2 buttons act as the grappling hook to rescue scientists or grab objects. With this control scheme your ship moves so smoothly that flying through obstacles while shooting enemies becomes manageable with very little frustration.

The game’s graphical design is simply beautiful and astounding. The colours are vibrant and crisp, while the action on the screen runs at a smooth frame rate. Playing this game is best described as watching a painting come to life.

The audio for PixelJunk Shooter 2 follows the same high standards gamers have come to expect from previous Q-Games titles. The music can be catchy, but whether or not you’ll be jamming to the beat depends on your preference towards the music genre. Regardless, with a solid soundtrack thanks to High Frequency Bandwidth, the sound effectively sets the tone and mood throughout.

In PixelJunk Shooter 2, a mining operation has unleashed a giant worm, which then eats your ship alive and begins wreaking havoc on the planet. Now inside this worm, you must save your fellow scientists while keeping your ship from meeting its fiery doom.

Your health is represented by a meter on the lower left corner of the screen and is affected by heat. When your ship’s temperature rises, you have to cool off quickly. Otherwise, it will explode and you’ll have to restart the level. Causes of overheating include damage from enemy projectiles and being too close to environmental hazards.

Attached to your ship are standard guns and heat-seeking missiles, which can also cause overheating if fired too frequently. You are also equipped with a grappling hook used for rescuing scientists as well as grabbing treasure and other objects. If you accidentally kill five of these scientists, it’s game over!

PixelJunk Shooter 2 is a very challenging title with its mix of aggressive enemies and crazy obstacles. There’s acid, which slowly burns your ship, as well as swarms of insect eggs that multiply rapidly. You may also have to blast through dirt or plant bombs to make clenched orifices relax and open. Later on in the game, you will need to manipulate the surroundings to keep your ship illuminated to prevent being attacked by creatures in the darkness.

The game is divided into three chapters, each with four levels and a boss battle at the end. You’ll encounter a huge wall-climbing turtle in one chapter while fighting off a Sauron-inspired eye in another. Just be prepared for epic battles of mass proportions!

With the innovation in the environmental puzzles and the massive bosses, the gameplay may become frustrating at times. That being said, a second player can join in offline to alleviate the difficulty. As long as one player survives long enough, the other player can be revived and continue as normal.

To change the pace, PixelJunk Shooter 2 has included an online, one-on-one competitive mode where players alternate being on offense and defense. While on offense, your objective is to find the stranded scientists and return them to your base. Your opponent has to destroy you during your rescue but will only be able to see you when you are within the direct line of sight. Playing ranked matches will allow you to gain more weapons and gadgets, thereby giving you reasons to stay hooked on this game.

Q-Games has been successful in the past games thanks to its well-executed visual and audio presentation as well as straight-forward controls. With PixelJunk Shooter 2, this tradition continues. The colourful and pleasant design along with challenging and innovative gameplay makes this latest title worth picking up.

By Uma Smith
This entry was posted on Monday, March 14th, 2011 at 10:11 am and is filed under Uma Smith, Video Game Reviews. You can follow any responses to this entry through the RSS 2.0 feed. You can skip to the end and leave a response. Pinging is currently not allowed.