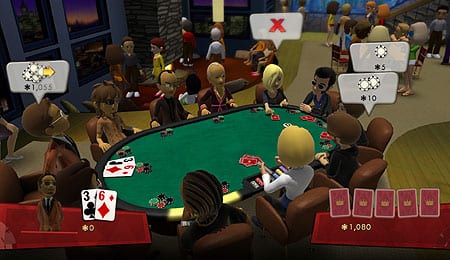 How can you call a game Full House Poker and not have the Olsen Twins?

A couple years ago Microsoft rolled out 1 vs. 100 to much initial fanfare — I remember being unable to even get into the original broadcast — but it failed to sustain its buzz and was quietly canceled after two “seasons” last July. Now Microsoft is trying a more simplified approach to the massive online party game by offering up Full House Poker, an Avatar-based affair from Krome Studios (the same company that designed Game Room) which serves as the final title in the House Party promotion.

The controls are very simple. Each time your turn comes up you have the option to call (A), fold (B) or raise (Y). Holding down the right trigger while selecting your play shows confidence while the left demonstrates uncertainty, allowing you to tentatively raise your bet or slam down your cards in disgust when folding. If you already know what play you’re going to make you can pre-load it and your avatar will act as soon as its your turn. A number of chip tricks, such as making one dance across your knuckles, are unlocked as you level up and can be performed with d-pad combinations to pass the time.

For those that are unfamiliar with the rules or need a quick refresher as to what wins between a full house and a flush you can push the left bumper at any time to access a full list of hand hierarchies.

If you ever checked out Krome Studios’ work on Game Room you know what to expect visually. Your avatar is imported into the game wearing whatever clothes you have them decked out in, but you can also unlock gear to wear exclusively within Full House Poker. A number of items like table surfaces, playing cards, chairs and casino location are customizable as well. Everything looks good within that sort of cartoony avatar style and the game moves briskly.

There isn’t much in-game audio outside of an ambient hum of voices, the clicking of chips and canned reactions to hands being won or lost. Some generic music plays quietly in the background, but it’s so soft I often didn’t even notice.

Although there are many variants of poker, the one you’ll need to know is Texas Hold ‘Em. Here each player is dealt two unique cards, and from there the dealer will eventually lay down five more face up, which are for everyone involved. From those seven cards the game will automatically make your best hand.

Having the best cards doesn’t necessarily mean much in poker, though, which is where the bluffing and betting come into play. And therein lays what figures to be the divisive issue when it comes to Full House Poker — there’s no money (or Microsoft Points or even a redeemable in-game currency) on the line. For some this is sure to be welcome news. For others, it could remove the thrill that only occurs when there’s something tangible to lose.

Whichever side of the fence you fall on, the simple truth is that without that threat you’re going to get plenty of gamers that go all-in all the time simply because they feel like it. Plus, another inherent problem with any online poker title is that reading reactions is a key part of the game, and that’s something that cannot be replicated with avatars.

In spite of these issues (and partly because of them), though, Full House Poker turns out to be a casually fun experience. The game is insanely easy to pick up and play even if you’ve never so much as watched a minute of poker on television. Chips aren’t your only reward, either, as each hand nets you experience points that unlock goodies every time you reach a new level. Allowing gamers to progress even while they’re getting taken to the cleaners goes a long way in making this a friendly offering for novices.

Offline single-player games allow you to customize several options, including the number of players, to polish your skills against the computer. However, while opponent A.I. is generally decent it does have a tendency to be all or nothing, often following a series of folds before the flop (the point where the dealer reveals the first three cards) by busting with a pair of twos that they went all-in on. That lack of consistency flies in the face of the “play style” each computer player is supposed to adhere to.

Those searching for a sterner A.I. test can look forward to the 10 Pro Takedowns, nine of which put you in one-on-one games with the game’s pros. Still, even these “pros” are often overanxious, and I was able to take down two of them in the very first hand.

Ultimately, though, Full House Poker is meant to be played online against other people, offering up both ranked and unranked games as well the option to host friends in your own casino. Based on your bankroll (which is tracked across all matches) and experience level, you can enter some higher limit games for the chance to really add to your winnings. Plus, in the vein of 1 vs. 100, there will be Texas Heat events where gamers enter massive 30-minute live tournaments for big experience points as well as unique unlocks.

Priced at 800 MS Points (US$10), Full House Poker offers another enjoyable way to compete online. If you’re an anti-social gamer or don’t like card games, you needn’t bother, but those looking for a fun and rewarding poker offering should feel good about anteing up.