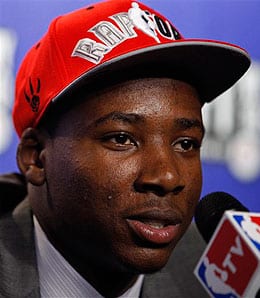 Ed Davis is starting to pay dividends for the Toronto Raptors.

Welcome to the Week 21 edition of the Wire Troll, our weekly look at players that may be available on your league waiver wire, but could see a spike in Fantasy value due to a variety of circumstances.

Fantasy playoff time is nearly upon us, and owners in head-to-head formats are fine-tuning their rosters in anticipation of a deep late-season run. It’s important to keep an eye on the NBA standings this time of year, as teams hopelessly out of the playoff chase are more likely to tinker with their lineups in hopes of finding something to build on for next season… if there is a season next year, that is. In a week during which the NFL and its players have walked away from the bargaining table after failing to reach an agreement over who does the dishes after the golden goose is killed and eaten, the Troll hopes that the NBA takes a look at the Big Picture and finds a way to mend the rift between labour and management. I love this game, but I think I speak for the majority of the Great Unwashed when I say that it’s tough to find much sympathy for monetary arguments between billionaires and the millionaires that work for them. Get it done, guys.

Let’s have a look at the wire, then, and hope that we’ll be worried about our Fantasy hoops fortunes at this time next year.

Greg Monroe, Detroit Pistons: Monroe has been on an outstanding roll since the All-Star break, averaging 15.3 points, 10.9 rebounds and 1.6 steals in his first nine games. With the Pistons’ playoff hopes all but dead, there’s little reason for the team to limit the rookie’s minutes as the season winds down, so double-doubles should be the norm for Monroe down the stretch. Those numbers won’t help the woeful Pistons, but they could bring you a Fantasy championship. Monroe is available in about one-third of Yahoo! leagues, but only about 10 per cent of ESPN formats. If he’s out there, grab him.

Ed Davis, Toronto Raptors. The 13th overall pick in the 2010 NBA draft has really rounded into form of late, averaging 10.8 points, yanking down 9.4 rebounds and swiping 1.4 steals through five games in March. He doesn’t shoot a lot, but when he does heave the rock, it typically finds its way home; Davis boasts an impressive 60.5 shooting percentage this season, including a stellar 65.7 per cent in March. Note: Davis is not yet eligible at centre in ESPN leagues, but with four starts in the middle this year he may gain eligibility before the season is over.

Tyler Hansbrough, Indiana Pacers: Hansbrough has quietly (which is the way NBA-related things happen in Indiana in March) been an absolute beast this month, averaging 17.7 points and 7.6 rebounds in just over 30 minutes per outing. He appears to have claimed the starting power forward’s position, and we would expect that he’ll remain in the role for at least the near future. The Pacers are right in the thick of the hunt for the final playoff spot in the Eastern Conference, so look for them run their best players out there the rest of the way. Psycho-T been a key cog in Indy’s rotation ever since the All-Star break, so the minutes should continue to pile up for the hard-nosed forward.

Darrell Arthur, Memphis Grizzlies: Arthur has been providing some fine play off the bench the past month or so, but he has really picked up his game in March — and has become Fantasy-relevant in the process. This month, Arthur is averaging 14.6 points, six boards and two blocks per outing — while logging a solid (for a reserve, anyway) 23-plus minutes per night. Rudy Gay may be back in the next couple of weeks, which could potentially hurt Arthur’s court time, but in the meantime he is a fine add in deeper formats.

Toney Douglas, New York Knicks: Douglas has been outstanding while filling in for the injured Chauncey Billups, who has been sidelined with a deep thigh bruise for the past six games. During that time, Douglas has averaged 16.8 points, 6.8 dimes and 2.8 treys. Billups is scheduled to return to action Sunday, but it would not be a shocker to see the Knicks — who are a virtual lock for a playoff berth — limit his minutes the rest of the way. The team has taken a nice step forward in 2010-11, and New York will do what is necessary to ensure that Mr. Big Shot is healthy come playoff time. Douglas will cede his starting gig to Billups, but he should see enough minutes the rest of the way to warrant a pickup in larger leagues.

Marcus Thornton, Sacramento Kings: Thornton looks to have found a home in Sac-town, averaging 19.4 points, 1.9 treys and 3.1 assists since being traded to the Kings back on February 23. His fine play could not have come at a more opportune time for Sacramento, which has been without star shooting guard Tyreke Evans (plantar fasciitis) since February 13. The Kings have not released a firm timetable for Evans’ return, with two weeks being the period most bandied about. Until Evans makes it back — and possibly beyond — Thornton should continue his strong performance from beyond the arc, and should also contribute his fair share of assists and steals. While he’s in the starting five, Thornton should be rostered in just about every Fantasy league.

By Buck Davidson
This entry was posted on Saturday, March 12th, 2011 at 6:53 pm and is filed under BASKETBALL, Buck Davidson, The Wire Troll. You can follow any responses to this entry through the RSS 2.0 feed. You can leave a response, or trackback from your own site.