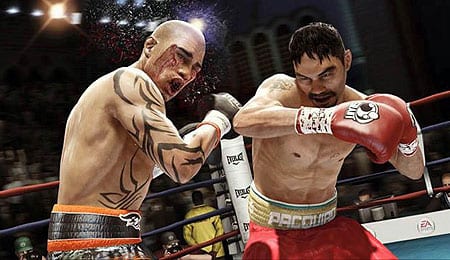 For the next 12 rounds, this poor dude’s name is Floyd Mayweather.

Ah, boxing. A sport steeped in tradition with names like John L. Sullivan, Sugar Ray Robinson, Muhammad Ali and, yes, even Mike Tyson. Before mixed martial arts, the sweet science was the definitive one-on-one test of manhood. And even now, in what few would argue is a lull in the sport’s storied history, the buzz surrounding a big fight is still nearly unmatched.

Of course, what happens between the ropes is only half the story. No sport has suffered more proverbial black eyes over the years than boxing with shady promoters and numerous claims of corruption. Somewhat incredibly, Fight Night Champion embraces every bit of that sordid lineage to create an oft times memorable experience.

Tweaking and streamlining were atop EA Sports’ list this year as the long-running dual-analog setup has been retooled to remove the swooping motions necessary in previous years. Now punches are executed with a flick of the right stick, allowing for more punch types. There are a dozen directional possibilities, each of which can be modified to a power shot (hold down R2) or body blow (L1).

Blocking has also been simplified. No longer do you have to press any buttons to alternate between guarding your head and body — that is now done automatically with R1. Hold it down and your boxer will absorb blows at the cost of some stamina. Tap it at the right time to block an incoming punch and you’ll take zero damage.

Where you’ll encounter some issues is when punches seem to, for lack of a better term, queue up, leaving you to launch a clumsy haymaker two seconds after your opponent has already stepped well out of range. It’s even more inopportune during close fighting when unintentional blows zap stamina and create openings for counter punching.

Every once in a while I have to take a step back and marvel at how far the gaming industry has come visually, and seeing the manner in which the boxers in Fight Night Champion bob, weave, clinch, punch and block is one of those times. There has always been a certain artistry that the sport’s true tacticians possess, and the photo realistic motion capture work absolutely nails it. The feeling you get when you side step an incoming jab and bury a stiff left hook into your opponent’s chin never gets old.

Beyond the fluidity of the in-ring animations, boxers show the effects of taking a pounding with faces swelling and blood spraying around. There is also a substantial amount of cut scene work done for the game’s story-driven Champion Mode. While largely excellent, there were some occasional hiccups in the frame rate.

Voice work in Fight Night Champion can be broken into two categories: cut scene and commentary. The former is really good with believable dialogue delivered nicely by all involved. Joe Tessitore and Teddy Atlas handle the play-by-play and colour duties, respectively. They do a fine job, but given my upbringing following the sport, when I think of “big fights” I think Jim Lampley and Teddy Merchant. The soundtrack is solid and is employed to memorable effect throughout Champion Mode.

Give EA Canada credit for effectively breaking new ground for a sports title with Champion Mode, a Hollywood style story that follows the trials and tribulations of aspiring pugilist Andre Bishop. It begins with you taking part in a prison boxing match before flashing back to Bishop’s days as an amateur middleweight with championship dreams.

From there you’ll watch the events unfold that led to Bishop’s incarceration and take charge whenever Bishop steps between the ropes. Penned by Will Rokos, who earned an Academy Award nomination for his work on Monster’s Ball, the story has a grittiness you simply have not seen in a sports game. Without spoiling too many details, it brazenly hits on the sensitive subject of corruption in boxing and doesn’t shy away when it comes time for bloodshed and profanity. It’s mature content to be sure.

Rather than just having the story serve as a backdrop to standard boxing matches, Fight Night Champion instead uses it to place Bishop in various situations. For instance, one bout sees him break his right hand early on, forcing you to win the fight using only your left. Another has you sustain an early cut, which you’ll need to protect or the referee will step in and stop the fight. Not every scenario makes for great matches, but it definitely keeps the action varied.

Although Rokos’ tale isn’t revolutionary, it never feels forced or phony. Bishop is a likeable character with a moral compass without being a saint. He’s flawed and vulnerable, and because of that his quest for redemption really works. You feel for him being railroaded… so much so that when the climactic fight finally arrives you’re ready to pound the reigning champion into submission.

Given how dynamic and fresh Champion Mode feels, it’s not surprising that Legacy Mode suddenly seems outdated. It’s not bad by any means, but it’s just another typical “My Player” mode where you create a boxer and guide him through the weight division of your choice. You earn experience points through training sessions and bouts to improve your skills, and if you bump them up enough you’ll unlock new abilities or bonus attributes.

Training is divided into two groups: skills and athletic. Skills training are a series of mini games (11 in all) that you actively take part in, such as working the heavy bag or sparring. Athletic training is simulated and is used to focus on a single attribute. You’ll engage in these activities during training camp, where you’ll also need to monitor your stamina as you prepare for the upcoming bout. As you earn money you’re able to train in different gyms, each with their own specialties.

Progressing through the mode feels slow, and it endures the same pitfall of so many similar offerings in other sports games. You’re always below average to begin with. Sure, Tyson wasn’t ready to be Heavyweight Champion the first time he laced up the gloves, but in his first year as a pro he fought 15 times, won them all via knockout and went past the second round just twice. He didn’t need to train for years to be powerful. He already was.

That feeling of being underpowered or plodding and having to work four or five rounds to beat some lowly ranked palooka is becoming harder to embrace, particularly if you begin with Champion Mode where Bishop’s skills are in place from the very start.

The bouts themselves feel more strategic than in past years, which was probably a necessary step once executing punches became nothing more than the flick of a stick and blocking no longer required you to choose whether to protect your head or midsection. Now it’s more about managing your stamina and not overusing your defensive techniques.

Punch yourself out early and your vicious hooks won’t have much steam behind them in the later rounds. Hold down block to absorb blows constantly and you’ll suffer the same fate. Even weaving too often will adversely affect your power. It’s a good system that often necessitates foresight and the patience to pace yourself and work deep into fights against quality opponents.

Another new addition that promotes intelligent blending of offense and defense is the flash knockout, which means some bouts are never more than one punch away from being over. Not everyone can uncork a flash KO, but when you’re in there against those that can the drama is heightened.

Online bouts are crisp, even if the ratio of brawlers to tacticians appears to be roughly 100-to-1 with most looking to knock you out or go down swinging themselves and get on to the next bout. Fight Night Champion also allows gamers to create or join gyms and participate in tournaments. On top of that there’s an online progression system like the one found in Legacy Mode so that you can cultivate your boxer’s skills to fit your style.

By Herija Green
This entry was posted on Friday, March 11th, 2011 at 6:26 pm and is filed under Herija Green, Video Game Reviews. You can follow any responses to this entry through the RSS 2.0 feed. You can leave a response, or trackback from your own site.