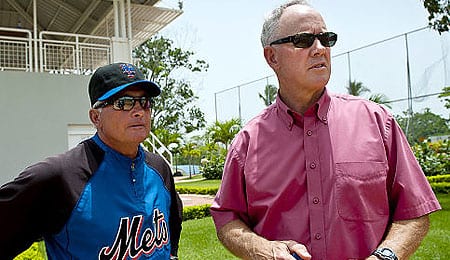 GM Sandy Alderson (right) needs to beef up the Mets’ rotation if new manager Terry Collins (left) has any chance of success.

With Johan Santana’s recovery from shoulder surgery expected to keep him out until mid-season – probably June at the soonest – the Mets need to find a starter to fill a rather sizeable hold in their rotation.

Could oft-injured Chris Young be the answer?

The team is reportedly “looking pretty heavy into” Young, according to new manager Terry Collins.

But as good as Young looked when he returned from his latest injury in September, we’re still talking about a 31-year-old righty that’s made just 36 starts over the past three seasons combined. That’s hardly what anyone would term as a dependable option.

Here’s what the Mets’ 2011 rotation looks like as of today.

For now, Mike Pelfrey enters 2011 as the Mets’ ace. He’s coming off a career-best 15 wins, but is hardly a dominant hurler by anyone’s standards.

Knuckleballer R.A. Dickey, one of the biggest surprises of 2010, is the No. 2 starter, but is it reasonable to ask this journeyman to repeat his performance from last season?

Jonathon Niese, who made modest strides (and at least stayed healthy) but was prone to long ball problems last season, is the current third starter.

And that’s about all we’re certain of at this stage.

Behind those three are: John Maine, who could be non-tendered, something we suspect would please most Met fans; Dillon Gee, who looked extremely sharp in the five starts he made in the bigs last season, but was way too hittable at Triple-A, which suggests that his MLB success was more fluke than fact; and Pat Misch, who pitched well at Triple-A and enjoyed some success in a swingman role with the Mets, but is 28 and has never proven himself as a big league starter.

It’s not the makings of a championship calibre rotation, is it? And the possible addition of Young – while a nice gamble – comes with too much risk to provide stability.

No, the Mets are going to have to sign a legitimate No. 2 starter and add two or three cheap options with possible upside to address their rotation issues. The problem is the team doesn’t seem willing to invest heavily in any of the bigger names on the market. Jon Garland was talked about as a possibility a few weeks ago, but the Dodgers swooped in and signed him last week, further eroding the market.

One wildcard here is Jenrry Mejia, who excelled in a relief role and was converted into a starter midway through 2010. A shoulder problem forced the Mets to shut him down in September, but he’s healthy now and is starting in the Dominican Winter League. If he can show enough development, this youngster could earn a rotation spot, but because of the arm problems, some within the organization believe his long-term future will be as a short reliever.

By RotoRob
This entry was posted on Thursday, December 2nd, 2010 at 9:18 pm and is filed under BASEBALL, RotoRob. You can follow any responses to this entry through the RSS 2.0 feed. You can skip to the end and leave a response. Pinging is currently not allowed.