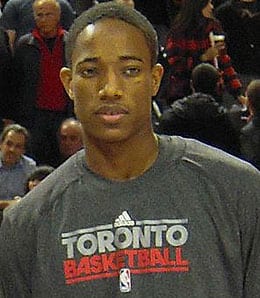 DeMar DeRozan has become the No. 2 scoring option in Toronto.

The 2010-11 season has pretty much been an endless struggle for the Toronto Raptors, so at this stage of the season – as we enter the unofficial second half — it’s really hard to describe any games as big for this lottery-bound club. Still, Tuesday’s game in Charlotte does hold significance for Toronto as it needs a win to avoid the dubious distinction of matching the franchise record of 11 straight road losses.

Hey, we all need to find inspiration somewhere, right?

The Raptors have had almost a full week off since that gut-wrenching home loss to Chris Bosh and the Miami Heat on Wednesday. Oh man, it would have been so sweet to stuff that game down Bosh’s throat in his return to the city he spurned, and while Toronto hung close the whole way, it was never able to make a push to take over the contest, ultimately losing 105-93. In fact, after about six minutes into the game, Miami led the whole way.

And yes, close only counts in horseshoes and hand grenades. Anyway you slice it, that was still the team’s 17th loss in 19 games, and I’m not taking any close calls as a moral victory at this stage.

There’s been precious little for a Raptor fan to get excited about this season, but the massive step forward that sophomore DeMar DeRozan has taken this year definitely qualifies.

We recommended DeRozan as a waiver wire pickup at the very beginning of the calendar year, but that ship has sailed, unless you’re in a rather shallow league. And those of you that did pick up the athletic second-year man haven’t looked back. All DeRozan has done this month is score at least 16 points in every game. His PT has risen steadily throughout the season, to the point that he’s now playing seriously heavy minutes on a nightly basis, and while DeRozan’s touches are down a smidgeon in February, he’s showing a sweeter stroke than he has all season, resulting in nearly 20 PPG. DeRozan’s rebounding is also way up in February as he is starting to offer a more Fantasy-friendly game.

Now the No. 2 scoring option in Toronto, DeRozan has adapted to the increased responsibilities in a very impressive manner. He’s even starting to jack up 3-pointers with a bit more regularity, but he still can’t drain one of those to save his life. If that portion of his game ever develops, he’ll become way more valuable.

And how about his performance at the Slam Dunk competition? I thought his second dunk deserved more love, and his overall athleticism definitely shone through regardless of the judging. Some impressive shit there, DeRozan. I really like this kid’s future.

Of course, really the only other thing Toronto fans have been able to hang their hats on this season has been the development of Andrea Bargnani into the go-to man in this offense. In the loss to Miami, Il Mago almost single-handedly earned the Raps a win by scoring 17 of his 38 points in the fourth quarter, and they were just four points down with four minutes to go. But for Toronto it was the same old story – very little contribution from anyone but Bargnani and DeRozan.

For Bargnani, the 38-point explosion was his highest since early December, and he has now scored at least 23 points in six straight games. And the shooting slump he went through last month is a thing of the past. Bargnani drained 15-of-26 on Wednesday and is up to 49 per cent for February – including a whopping 48 per cent from beyond the arc. Lights out, baby!

Although it was hard to tell on Wednesday, when he put up six (and made five!), Bargnani is actually attempting much fewer 3-pointers this season, which is a good thing, as you don’t really want your main man and supposed low-post presence settling for shots from behind the arc all night. The fact that he can hit them is fantastic, as it helps to stretch opposing defenses and bring the key shot blockers for the other team out of the paint. But the main reason Bargnani has stepped up his scoring this season (besides the fact by default he’s the No. 1 option now) is that he’s being more aggressive in terms of taking it to the hoop, and that’s manifested itself in a major increase in his freebie attempts. He’s averaging five trips to the stripe per game after getting there just 2.9 times per game last season. On the downside, his rebounding has dropped and the increased touches have also caused his turnover numbers to skyrocket, but all in all, Fantasy owners have to be pretty pleased with the value that Bargnani has provided this season.

Finally, let’s talk about one more Raptor first rounder that’s starting to make headway. Ed Davis, last year’s top pick, is beginning to look like a decent waiver wire pickup even though the Raptor PF situation is already muddled and about to get worse once Reggie Evans returns (which is supposed to be any time now). Still, it’s hard not to pay attention to the rebounding numbers this rook is putting up lately. Against the Heat, he pulled down 13 boards, marking the third straight game he’s had at least that many. Mr. Windex!

Davis is getting very few touches and barely ever gets to the line, so don’t expect much scoring, but if you need rebounds, he’s going to provide a boost. Bear in mind that last month he averaged 7.2 points and 1.4 blocks per game (although he hasn’t come close to that lately) and so far in February, he’s averaging nearly a steal per game. If Davis can put these numbers together – nearly nine rebounds, over seven points, almost a block and a half and one steal per game – that would provide some very nice value. Keep an eye on how Davis’s minutes shake out down the stretch as it certainly stands to reason that with the Raptors already 10 games out of the playoff picture, they should play him more and more in the second half.

By RotoRob
This entry was posted on Tuesday, February 22nd, 2011 at 1:46 pm and is filed under BASKETBALL, NBA Today, RotoRob. You can follow any responses to this entry through the RSS 2.0 feed. You can leave a response, or trackback from your own site.