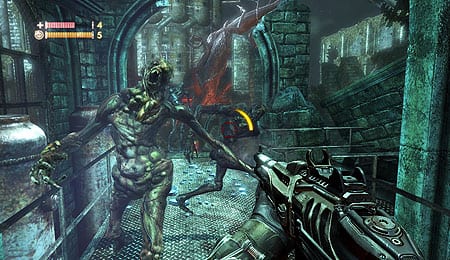 The residents of Katorga-12. It’s gonna take more than topical cream to fix this.

If any company out there knows how to produce and promote successful shooters, it’s Activision, and its Call of Duty franchise has been seated atop the gaming world for years. And yet, the recently released Singularity seems to have fallen through the cracks with minimal fanfare surrounding its launch. Usually when that happens it’s because something has gone terribly wrong with the final product. However, that’s not the case here as Singularity offers one of the best FPS campaigns I’ve seen this year.

Like seemingly all recent Activision shooters, Singularity favours the same basic control scheme as Call of Duty, though it runs into trouble by mapping too many powers to your bumpers and right analog stick. By far the worst example is assigning both the “revert” and “age” powers to the left bumper. In theory pressing once will “age” an enemy, while tapping it twice quickly will execute the “revert” ability. In practice it’s imprecise and more often than not didn’t read my second press.

The right analog stick also controls two abilities — press to pull objects toward you, hold down to create a ball of time-freezing energy — though it fared considerably better. Neither issue rates as debilitating since you’re incapacitating enemies either way, but it was a bit frustrating.

Everything on the island of Katorga-12 looks solid. The rundown structures slowly being reclaimed by supernatural plant life adds a legitimately creepy vibe — an accomplishment given the powerful weaponry and technology at your disposal. Building on that steady sense of foreboding is a gruesome array of creatures stalking your every move, all of which gives the game something of a Dead Space or vintage Resident Evil feel to it.

The time manipulation effects stand out as the title’s most endearing graphical elements as staircases are reconstructed and human soldiers withered to dust before your eyes. There are also some unique effects to be seen in the available weaponry, including plenty of satisfying decapitations and bodies being torn limb from limb in gory slow motion.

All that being said, there’s nothing truly striking or memorable about what you see throughout the game. In fact, with few exceptions you’ll be traversing liberally recycled locations possessing many of the same accoutrements (typewriters, boxes, phones, barrels).

Painful Russian accents abound on the audio side of things with much of the story being filled in through the use of audio logs (BioShock, anyone?). It’s not that the voice acting is bad when it comes to conveying emotion or things of that nature. Rather, it just sounds like Americans doing stereotypical Russian impressions. The developers appeared to have been aware of how much the accents were blending together as almost every audio log clearly spells out who is speaking to avoid confusion.

Music and sound effects do their job nicely. The score steps aside when appropriate to heighten the tension and also picks up considerably when things get frantic. Otherworldly shrieks and moans punctuate a strong effort from the sound effects, though at times it feels as though your enemies don’t make enough noise to be detected and can score some unexpected hits from the blind side.

Singularity features an interesting story surrounding the Soviet Union discovering Element-99 in the aftermath of WWII. They believe successfully harnessing E-99s power will give them a technological advantage over the sinister United States and its atomic weapons. However, the experiments go horribly wrong, leaving everyone on the island of Katorga-12 dead and the project abandoned.

Shifting to the present day, strange satellite readings cause the U.S. government to dispatch a unit to an island off the coast of Russia. You play as Nate Renko, an American soldier and part of the team sent to investigate, and things get ugly in a hurry. A mysterious pulse wave sends your helicopter crashing to the ground, killing or scattering the rest of your squad and leaving you to investigate alone.

On your mission you’ll be hurled through time itself, alternating between 1955 (when the E-99 testing was ongoing) and 2010. This isn’t the world as we know it, however, as a change in the past has caused a ripple effect that resonated to the present. In this alternate reality the Russians are the dominant world power, and now it’s up to you to travel back and restore the original timeline.

As you go about fixing that mess, you’ll learn details about Katorga-12 and the nefarious experiments the Russians were doing with the highly unstable E-99. The story moves along at a brisk pace and is well fleshed out for those that take the time to read the various notes and listen to the audio logs scattered throughout the island. You can expect to spend around 10 hours playing through, and there are some good payoffs at the end as well that really delve into just how complexly interwoven the timeline has become due to the rift.

While Singularity is a first-person shooter at its heart, it still manages to stand out thanks to some innovative weaponry and your trusty TMD (Time Manipulation Device). The TMD is the real difference maker as it adds much needed variety to the combat, even with obvious similarities between its powers and BioShock’s plasmids (not to mention Half-Life 2’s gravity gun). Even without being truly original, the ability to age enemies to dust or blow them apart with a short-range burst is great fun — as is watching your enemies meet their demise in a shower of blood and dismembered body parts.

The TMD’s effect isn’t limited to combat, either, as you’ll be using it to restore rusted out electrical boxes, rebuild stairs or pull items through time. It’s also a critical component in solving most of the game’s rudimentary puzzles. Unfortunately, Singularity is guilty of not getting as much mileage as it could have out of the TMD with puzzle solutions repeating frequently and a general lack of items for you to interact with via your TMD. It’s still a fun concept, but you’re left wanting more.

As noted, the game also packs a fairly innovative assortment of guns. Yes, your standard pistol, shotgun, assault and sniper rifles are all present, but it’s among the non-traditional armaments that you’ll find some visceral fun. The highlight of which is the Seeker. A high-powered rifle infused with E-99 tech, the Seeker has you take control of the bullet once fired, allowing you to steer it around cover and into the face of unsuspecting enemies. It’s easily one of my all-time favourite weapons.

There’s a fair amount of customization to be done along the way as well as you can upgrade your TMD powers, add passive abilities (such as more accurate weapons) and beef up Renko with things like extra health or the ability to hold your breath longer. Weapons can also be improved with more power, bigger clips and quicker reload times. Searching for the items necessary to progress in these areas comprises another key element of the game.

Singularity does come with a multiplayer as well, though it’s pretty bare bones with just two modes (Team Deathmatch and a location capture) and three maps. There is actually some fun to be had as you have the chance to play as the game’s various creatures, even little ones like phase ticks, which gives it a different feel from so many of the cookie cutter experiences out there. However, with so little variety it’s hard to imagine people playing it much beyond what’s needed for the online achievements.

While not the most inventive title of 2010, Singularity still manages to carve out an enjoyable niche by melding together a lot of cool things you’ve seen elsewhere and then adding the hook of time manipulation to the melting pot. The multiplayer lacks legs, but shooter fans should find the single-player story compelling.