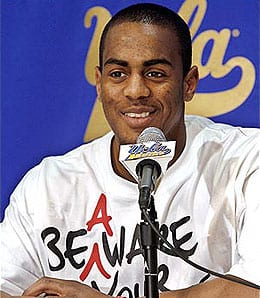 Arron Afflalo’s development has been a nice bonus for the Nuggets.

If the endless Carmelo Anthony rumours (more commonly known as the Melo-Drama) are affecting the Denver Nuggets, it’s not apparent in their play of late. The Nuggets kicked off a five-game road trip in fine form Tuesday, downing Washington 120-109.

With Utah struggling, Denver has pulled within a half-game of second place in the Northwest division (and sixth in the West), and the division-leading Thunder has been spinning its wheels lately, opening the door for the Nuggets to make a run. And even though they’re just 6-13 on the road, as far as road trips go, this is about as easy as it gets as after the stop in the U.S. capital, the Nuggets travel to Detroit, Cleveland, Philadelphia and New Jersey to wrap up the month.

We’ve been remiss in discussing what a fine – and steady – season shooting guard Arron Afflalo is enjoying in Denver. There’s a slim chance he’s still floating on your league’s wire, depending on how small your league is, and if that’s the case, you should definitely swoop down like a seagull on a French fry. With J.R. Smith riding the pine on Tuesday because he was late for shootaround, Afflalo got extra minutes (over 39 of them to be precise), and he responded with 18 points, four assists, three boards and a pair of threes. His minutes are down a bit this month, but he’s still been quite productive, averaging 13.2 points, 3.5 boards, 2.6 assists and 1.5 treys per game while shooting a robust 53.6 per cent from the field. In his fourth season, the 27th pick in the 2007 draft has definitely come into his own.

Also taking advantage of Smith being in George Karl’s doghouse was Al Harrington. He saw his most action in over two weeks and responded with 21 points – his highest scoring output since December 10 – on a lights-out 6-of-8 shooting performance from beyond the arc with five boards, two steals and two assists. Despite reduced PT, Harrington is getting more touches in January, and he’s been shooting the ball much better. There’s not much chance he’s available in your league unless you’re playing in a smaller than standard-sized format.

Chauncey Billups, one of six Nuggets in double figures on Tuesday, hasn’t had a strong January, but he’s picking it up in the assist department lately, having dropped six dimes in three of the last four games. He continues to be a key cog in the offense, finishing at a game high +20, for those that pay attention to that stat. Mr. Big Shot’s shooting continues to erode slightly, season by season, and owners need to be concerned about the trade rumours, but for now you need to just keep plugging him into your lineup every night.

As solid as Billups was Tuesday, it was his understudy – Ty Lawson – that led the charge as the Nuggets stretched the lead in the second quarter. Lawson scored seven of his 17 points in the second stanza, and while his minutes remain sporadic off the bench, he’s still managed to reach double digit points in four straight games and he pitched in with a couple of steals and a three-pointer against the Wizards as well. The prospect of Lawson taking over the controls of the offense should Billups be dealt has made him a popular roster stash, and that’s one of the key reasons we recommended Lawson last month, however, he’s currently owned in less than a third of Yahoo! leagues, so this is still a train you can hop aboard. And even if Billups sticks around, Lawson is proving to have standalone value.

Another Nugget we recommended last month, Kenyon Martin, is still struggling to get back to form. He’s only reached double digits in points once and in rebounds once, but his secondary stats have picked up lately with three blocks in the past two games and four steals over the last three. K-Mart is still not playing in back-to-backs which makes him a very tough pill to swallow in weekly leagues. At this stage, he remains a strong defensive player (his +12 ranking on Tuesday was the second highest on Denver), but his offensive upside is capped until he’s healthier. Still, on the plus side, Martin has seen his most minutes of the season in the last two games, so the production should start to follow. Watch him closely.

By RotoRob
This entry was posted on Wednesday, January 26th, 2011 at 5:33 pm and is filed under BASKETBALL, NBA Today, RotoRob. You can follow any responses to this entry through the RSS 2.0 feed. You can skip to the end and leave a response. Pinging is currently not allowed.