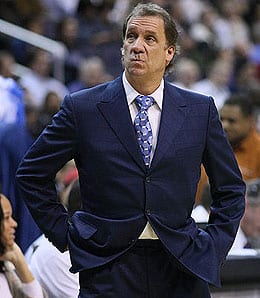 If the Wizards don’t win a road game soon, Flip Saunders will have a reason to look constantly drunk.

Break up the Wizards! Washington beat the Jazz Monday to earn consecutive victories…for the first time this season. Flip “I look perpetually drunk” Saunders’s crew is finally taking care of business at home, winning four straight in front of their fans.

Washington dominated on the glass, thanks to JaVale McGee pulling down 11 boards for the second straight game – and third time in four tries, while Andray Blatche also had 11 rebounds and a studly line of 21 points on 8-of-15 from the field and 5-of-7 from the line with four blocks, three steals and three assists. Now that’s the kind of performance his owners have been waiting on this season.

Not only does Washington have its first winning streak of the season, but this also marked its first win of the season over a team with a winning record. Yikes. No wonder the Wizards are headed for another lottery pick. Still, they are playing better lately, and have managed to move into a virtual tie with the Raptors for 12th place in the East. Of course, this improved play has been as the result of them playing five of eight games this month at home. There is still that whole 0-19 on the road thing hanging over their heads. Right…that little detail.

The Suns are lighting up the scoreboard again, and walked into MSG Monday and beat the Knicks 129-122 in one of those classic last-basket-wins shootouts. Phoenix has now won a season-best three straight games (scoring at least 115 in each win) as it attempts to claw its way back into the playoff race after a bad stretch. The Suns are 2.5 games back of eighth place Portland, which is picking up its pace lately.

Grant Hill continues to show there’s plenty of life left in his aging body as he poured in 25 points, giving him at least 21 in each of the two games he’s played since sitting a couple of games with knee and ankle woes. Seniors are people too!

Phoenix kicked off a five-game Eastern road trip with the win, a nice start considering it has struggled on the road. This is going to be a very important trip for the Suns, because if they stumble here, they’re going to find themselves facing a serious uphill battle to get back in the playoff race. And if they fall out of it, could Steve Nash’s days in the desert be numbered?

The Grizzles got de-clawed by the Bulls at home on Monday, dropping a 96-84 decision as their backcourt combined for just 10 points, less than half of what Derrick Rose did by himself. Memphis had won five straight home games over Chicago, but that streak ended with a major thud. Outside shooting was the difference here, as the Grizz managed just one trey to Chicago’s 11. Of course, the fact that Memphis only shot 38 per cent from the field (Rudy Gay…1-for-10…seriously?), didn’t help matters.

At least O.J. Mayo snapped out his recent doldrums, pouring in 15 points on 7-of-14 shooting and nailing one from long distance in 30 minutes off the bench. He had only managed 14 points combined in his three previous games and came in on a 10-for-44 slump from the field, so this was a welcome sight for his owners who must be praying that the trade rumours surrounding Mayo come to fruition and he lands in a place where he can start producing like he did last season.

Zach Randolph continues to be unstoppable, as he scored 21 points and added 13 boards – nine of which came on the offensive glass. Chalk up seven straight double-doubles for Z-Bo who is merely averaging 25 PPG and 14.7 RPG this month as his numbers have gotten more impressive month by month. I find it hard to imagine him topping what he’s done in January, however, so maybe this is a great time to cash in your chips and trade him while his value is sky high. It’s something to think about, anyways.

Mike Conley dropped six dimes and had a couple of steals but he was just 2-of-6 from the field for a paltry five points and, unfortunately, he’s going in the reverse of Randolph as his numbers have fallen after his blazing start. Conley is only shooting 40.5 per cent from the field in January, and he’s been awful from long distance this month and, really, has struggled from beyond the arc for most of the season.

Notwithstanding Monday’s stinker, Memphis has been playing a bit better lately, but not still good enough to stop it from losing ground on Portland, which currently holds down the eighth and final playoff spot in the West.

Milwaukee’s long-time futility in Houston continued Monday as it lost for the 11th straight time on the Rockets’ court, 93-84. The Toyota Center opened in 2003, and the Bucks are the only NBA team that has never won a game in that building. How many Milwaukee players do you think are ready to drive their Ravs off a cliff? Of course, when you start the game by missing 14 of your first 19 shots, chances are you’re going to have a tough time recovering.

The Bucks are really falling apart now, having dropped eight of 10 to fall behind Charlotte in the East. Milwaukee is now two games back of the Pacers, who currently hold down the eighth spot. Brandon Jennings can’t get back soon enough.

The news wasn’t all bad for the Bucks. Corey Maggette moved into the starting lineup and exploded for a season-high 25 points on 11-for-18 shooting with a couple of treys. Could he be the new starting three in Milwaukee going forward? Maggette is available in almost half of Yahoo! leagues, so it might be worth a waiver wire pluck to find out.

In another good sign for the Bucks, Drew Gooden’s minutes continue to rise in his third game back from the foot injury that cost him a couple of weeks. He responded Monday with his first double-double in over a month, and he even enjoyed his first two-block game of the season, but that’s not a sight you should get used to. Gooden could very well be available in your league (he’s owned in just less than half of the Yahoo! leagues), so take a peek at your wire to see if he’s on it if you need help in boards and points.

By RotoRob
This entry was posted on Tuesday, January 18th, 2011 at 11:00 pm and is filed under BASKETBALL, NBA Today, RotoRob. You can follow any responses to this entry through the RSS 2.0 feed. You can leave a response, or trackback from your own site.