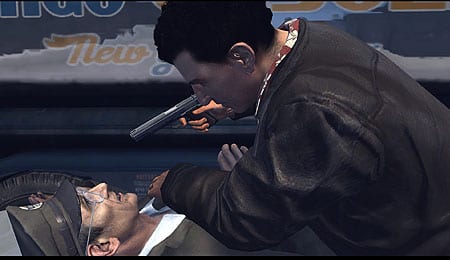 Joe’s Adventures starts and ends strong, but there are some hiccups in between.

The second (and final) piece of downloadable content for Mafia II hit Xbox Live and Playstation Network back in late November. Entitled Joe’s Adventures, this add-on puts you in the shoes of Joe Barbaro, the right-hand man of Vito Scaletta, and covers the roughly 10-year period during which Vito is incarcerated for stealing gas stamps. Unfortunately, like Jimmy’s Vendetta, there’s not much story development here, which is a shame given how interesting a character Joe was.

It starts promisingly enough with a cut scene picking up at the moment of Vito’s arrest, which launches Joe into a mad dash to silence the witness. It’s punctuated by a shootout and a car chase across a frozen pond, but as soon as that business is settled we’re right back to the same text-based mission briefings seen in Jimmy’s Vendetta. The timed scoring system also returns, as does the wildly inconsistent quality of the undertakings.

Stretched over 24 missions and covering roughly 7-to-8 hours, Joe’s Adventures falls into the identical pitfalls of the first DLC. Most notably, you spend a copious amount of those hours driving all over the vast Empire Bay to either trigger new missions or complete what you’re working on. Mafia II had plenty of these long car trips, but more often than not the game used that time to advance the excellent story. Here you’ll be listening to the radio and hoping that the mission you’re about to activate won’t involve a bunch more driving.

To its credit, Joe’s Adventures presents a better mix of activities than its DLC predecessor. In addition to the shooting and standard driving missions, you’ll also be tasked with melee combat jaunts and some different takes on getting from Point A to Point B, including one where you can’t allow your vehicle to drop below 30 miles per hour.

Easily the high points here are the handful of cinematic missions, which include new dialogue and cut scenes while also removing the timer. There are some pretty memorable shootouts, including an intense gunfight in a supermarket and another in a brothel. Toward the end when several of these took place I found myself wondering why there weren’t more of them.

Unfortunately, though, there aren’t. Instead of additional gunplay we’re treated to several dull and/or frustrating driving missions. The dull ones — like when you’re charged with informing a trio of wise guys the cops are looking for them — are bearable because odds are you’ll only be playing through them once. However, the frustrating ones are another matter as they’re irritating not just for their difficulty but also their oft-times ambiguous tenor.

Two prime examples involve encounters with cars full of enemy mobsters. In both instances it would appear the spirit of the mission is to engage them in your vehicle, but that’s basically impossible. In the one where you’re being chased your truck is too slow, and in the one where you’re doing the chasing you’ll get gunned down by the second car before you can run the target off the road. So instead of playing them out this way you’ll instead have to hide behind your parked car at the start and kill them before completing the mission at a relatively leisurely pace.

My final complaint about Joe’s Adventures is the omnipotent Empire Bay Police Department. I can’t even tell you how many times the police were looking for me — even when they were nowhere near the crime scene they still managed to put out an APB on me and/or my vehicle. Given that seemingly one in every five people in Empire Bay is a cop you can imagine how much more difficult some missions were made by the unfair involvement of the EBPD.

There’s some good new content in Joe’s Adventures — including 19 more Playboy mags to be found — but the amount of time spent in your car is overkill and the story elements don’t do justice to a character that was so well fleshed out in Mafia II.

By Herija Green
This entry was posted on Wednesday, January 19th, 2011 at 7:08 pm and is filed under Herija Green, Video Game Reviews. You can follow any responses to this entry through the RSS 2.0 feed. You can leave a response, or trackback from your own site.