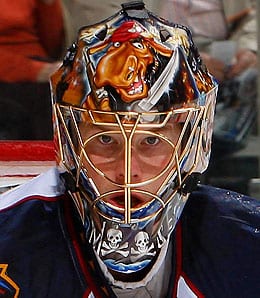 Johan Hedberg may have earned a timeshare in the Devil net.

First off, I would like to wish everyone a Happy New Year. Sure, for some of us it has been a very tough start, Fantasy hockey-wise, but hey, there are still two to three months left, depending on the type of league you are in. It is often said this is the time of year to make a move because not everyone is paying attention. That has some merit as the time between the Winter Classic and All-Star game can catch some off guard a bit.

It really is the time of the year to scour deep into the waiver wire and also troll for players that may have been dumped because there were no takers on the trade market. Life imitates Fantasy in some cases, so keep that in mind.

The question becomes where to head off to on this week’s picks. With the World Junior Championship currently happening and the Winter Classic now over, it is a perfect time to see what is out there.

Time to go fishing, ladies and gentlemen. Are you ready?

Johan Hedberg, G, New Jersey Devils: Yes, this sounds nuts. However, Hedberg could see extended time if New Jersey just keeps falling apart when Martin Brodeur is in net. Really, neither goalie is all that good on the surface, but Hedberg has shown the ability to play well in stretches, unlike the 600+ win netminder this season. For what it is worth, and if you are really desperate for goaltending because Dwayne Roloson was taken, then this is a poor man’s alternative in deeper leagues. New Jersey can get this turned around enough if all facets of the game are heading in the right direction. No, I don’t mean they’ll be playoff-bound, just turned around.

Olli Jokinen, C, Calgary Flames: Yes, Jokinen is slowly starting to produce some Fantasy bang for the buck. Some may think he is going to cool off again, but even if he gets two points for every three games, that is not too shabby an addition off the waiver wire at this juncture. Do the linemates matter? They really does not. The key is to dig way outside of the box and, well, Jokinen was thought to be an absolute bust at the 20-game mark.

Thanks again and into 2011 we go. Next week we will get closer to normal and maybe add a little more as well. Keep an eye out on the waiver wire, everyone, as one never knows what may just pop up.

By Chris Wassel
This entry was posted on Monday, January 3rd, 2011 at 3:23 pm and is filed under Chris Wassel, HOCKEY, The Wire Troll. You can follow any responses to this entry through the RSS 2.0 feed. You can leave a response, or trackback from your own site.