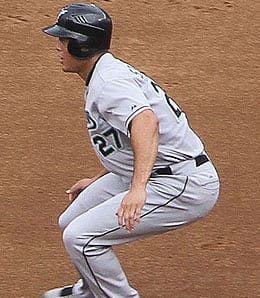 With less than seven weeks until pitchers and catchers report to Spring Training, now’s a good time to begin kicking up our baseball coverage in anticipation of the new season.

As always, the Florida Marlins are a team in transition. Gone from the 2010 incarnation are Dan Uggla, Cody Ross, Jorge Cantu and Ronny Paulino. But the team’s offensive core is young and improving, spearheaded by Hanley Ramirez and a trio of sophomores, any and all of which are capable of exploding in 2011 – Mike Stanton, Gaby Sanchez and Logan Morrison.

Last season, the Marlins were consistently mediocre, never rising above four games over .500 and never falling below six games under .500 in what had to be termed a disappointing 80-win season after a fine 2009 when the club won 87 games and flirted with the NL Wild Card. This was a team expected to be in the mix for a playoff spot in 2010, but never really got untracked. And a 7-13 finish doomed the Marlins to their first losing season since 2007.

Even so, with plenty of young talent on board, there is no reason to blow things up, especially with the new stadium — and the anticipated boost that will provide this cash-strapped organization — coming in 2012

Yes, the Philadelphia Phillies and Atlanta Braves have made big moves this offseason to solidify their hold on the NL East, so it’s reasonable to wonder if Florida can manage enough growth organically to keep pace. But with so much potential impact talent on offense, a rotation that looks very steady and an improved bullpen, Florida could be poised to return to .500.

Speaking of the rotation, Ricky Nolasco is healthy now after getting hurt in August and undergoing season-ending knee surgery in September, and the Marlins ended speculation that he might be dealt when they rewarded his 14-win campaign with a three-year, $26.5-million extension. His peripheral numbers have been far better than his ERA would indicate, and if Nolasco can just limit the long balls, he could really take a major step forward as the No. 2 man in the Fish rotation behind ace Josh Johnson.

The rest of a strong rotation includes Javier Vazquez, Anibal Sanchez and Chris Volstad, and this is one aspect of the team that is not up for debate come Spring Training. It’s certainly not a top five starting staff, but if Johnson stays healthy, Nolasco, Sanchez and Volstad continue to progress and Vazquez pulls his usual “I’m back in the NL, so suddenly I’m awesome” routine, this rotation could surprise a lot of people. However, considering the returning four are all righties, it’s a bit surprising the Marlins didn’t land a southpaw to fill out the rotation. That may come back to haunt them.

So one the biggest keys here is how much better offensively Florida will be this season, especially since Uggla’s 33 homers and 105 RBI are now batting in division rival Atlanta’s lineup.

Manager Edwin Rodriguez – who some believe is a lame-duck manager as the team waits for a crack at Ozzie Guillen in 2012 – will need to generate a fairly significant improvement from an offense that was middling in 2010 if his club has a chance at playing .500 ball. Halfway through the 2010 season, Rodriguez took over as the interim manager from Fredi Gonzalez, who was fired with the team sitting at 34-36. Under Rodriguez, they went 46-46 – hardly a whopping improvement – yet he was surprisingly hired as the full-time manager this offseason. Sure, injuries played a role in the Marlins’ down year, but unless something drastic happens, you can expect Florida to have a new manager by Opening Day 2012.

As for the bullpen, Leo Nunez has the closer job to start the season with Clay Hensley again battling him for the right to earn saves. The rest of the pen, which wasn’t great last season, has undergone a major overhaul with several newcomers added through trades and free agency. It should be a much better unit in 2011.

I’m not sure the turnaround will happen this season for the Marlins. But as they begin to lock up some of their key players and some of the youngsters start to mature, it will coincide with the team’s new stadium, currently under construction. Scheduled to open in 2012, Miami Park will provide a huge boost for a team that’s been financially strapped for years and has finished dead last in attendance in the NL in each of the last six seasons.

CF Chris Coghlan: Great potential lead-off man, but coming off injury-plagued and disappointing sophomore season.
2B Omar Infante: Coming off career year, but still not the most Fantasy-friendly player because of his hollow average.
SS Hanley Ramirez: Consistent base-stealer but his power has slipped and his BA tumbled last year. Hopefully his elbow issues are behind him.
RF Mike Stanton: Had an instant impact in the final two-thirds of the season after his promotion to the Fish. Pure power, with sky high ceiling.
1B Gaby Sanchez: Enjoyed very productive rookie season, forcing Morrison to the outfield in the process.
LF Logan Morrison: Showed nice gap power and is capable of turning some of those doubles into homers.
C John Buck: Turned career season into a three-year deal. Nice power from a backstop, which is exactly what the Marlins needed.
3B Matt Dominguez: He’s never played above Double-A, but has a big-league glove. If he can’t win the job, Infante, Wes Helms or Emilio Bonifacio will fill the gap until Dominguez is ready.

Donnie Murphy: Showed surprising pop in limited PT; clearly it was a mirage, but he’s been re-signed to a minor league deal.
Scott Cousins: Nice extra-base pop at Triple-A and continued to impress in first taste of the Show.
Brett Hayes: Back-up catcher is a decent contact hitter, although you couldn’t tell that during his time in the majors.

RHP Josh Johnson: Unhittable ace just needs to avoid the DL to win a Cy Young.
RHP Ricky Nolasco: Much better on the road (10-3, 3.86) than at home (4-6, 5.46) last season.
RHP Anibal Sanchez: Finally stayed healthy and looked his best since his huge rookie season.
RHP Javier Vazquez: More hittable last year, but the walks and homers were the real problem. Always seems to fare better in the NL, so consider him a sleeper.
RHP Chris Volstad: Stayed healthy and made some progress — especially in the second half — but you’ll need to look elsewhere for strikeouts.

Closer RHP Leo Nunez: Reduced workload last year resulted in mostly improved performance and his first 30-save season, even though he lost the closer job late in the season.
Set-up RHP Clay Hensley: Had a fantastic season and proved he could close late in the year.
Set-up RHP Ryan Webb: His nice season was lost in the fanfare of the more prominent Padre relievers. Webb could emerge as a fine set-up option in Florida.

By RotoRob
This entry was posted on Sunday, January 2nd, 2011 at 3:11 pm and is filed under BASEBALL, RotoRob, Team report. You can follow any responses to this entry through the RSS 2.0 feed. Both comments and pings are currently closed.