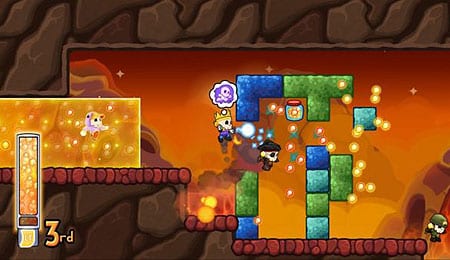 I loaded up Raskulls and a game of Tetris broke out.

Microsoft’s ongoing Games for the Holidays promotion rolls on with the release of Raskulls, an on-foot racing game that features a cast of lovable little scamps. Cutesy graphics suggest it’s aimed at the pre-pubescent crowd, but unlike A World of Keflings, there are some legitimately difficult challenges that make Halfbrick’s latest effort more than just casual fare.

There isn’t a lot to master in Raskulls as your quest to reach the finish line equates to light platforming and a lot of button mashing. Unfortunately, pummeling blocks with the “X” button doesn’t always feel as precise as it should — too many times I was left wondering why I’d swung one direction instead of my intended one. Everything else runs pretty smoothly, but when tenths of a second can be the difference between success and failure, it magnifies even modest issues.

The little skull creatures that you play as are fairly adorable in their various outfits with dragons, ninjas, knights and more. They have a cartoony colourfulness that is often in direct contrast to some of the difficulty spikes you’ll find sprinkled throughout the game. Backgrounds are bright and vibrant with minimal detail, though there’s certainly enough to distinguish between desert and snow levels.

As you’d expect in a cartoon racing game, the audio favours up-tempo melodies that do their best not to get annoying whether you’re running a race for the first time or the 20th. For the most part it succeeds, even greeting failures with the classic “wa-wa-waaaaaaaa.”

Although Raskulls changes up the formula here and there, the game is built on trying to cross the finish line as quickly as you can. To do this you’ll need to amass bottles of frenzy (aka turbo), smash blocks with your wand and grab packages that grant you special limited-use abilities (like a laser that only destroys segments of a block or a flame charge that propels you through anything in your path). The actual platforming is pretty simplistic, meaning that more than anything else it’ll be your ability to smartly use boosts and items that leads to success or failure.

The game’s primary single-player mode is called Mega Quest, which tells the goofy story of a rat and his henchmen trying to steal mystical power sources from the Raskulls. It’s a basic but fun setup with some genuinely amusing dialogue and sight gags throughout the cut scenes.

Of course, the plot is just there to propel you from one race to the next, and in Raskulls you’ll encounter four basic types: traditional (against A.I. opponents), checkpoint (you must pass each subsequent one without time expiring), frenzy (finish without running out of turbo) and one where you must destroy blocks to get an object to safety.

Within the main mode, the game offers up two distinctly different experiences. The primary quest offers very little challenge with only a handful of levels requiring more than one try to complete. Conversely, the optional and bonus stages can be extremely difficult. I wasn’t fond of the frenzy challenges because even a full meter runs out in under five seconds, but easily the most annoying to me were the ones that had you trying to scale upward by destroying blocks. It was during those levels that the oft-times imprecise nature of the controls really affected me as I’d try to move quickly while smashing blocks, but would find myself destroying the wrong group or falling off a block.

There’s also on- and offline multiplayer, which is surprisingly strategic, competitive and above all, fun. The courses look to have been designed to keep the players bunched up as it was rare to have someone really separate from the rest of the field. Zapping each other makes for a good time as well with everyone trying to get the upper hand with a well-timed swat or power up. I even had quite a few laughs, highlighted by springing off the head of an unsuspecting opponent to reach the finish line (achievement unlocked).

Raskulls is pretty fun, but it can also be frustrating. That being said, the game’s most annoying levels are entirely optional, leaving an enjoyable primary quest and solid multi-player experience for casual players with the tougher challenges reserved for more serious gamers.