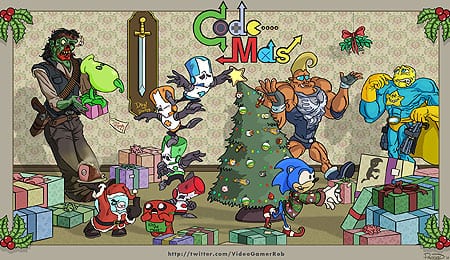 Blake Packard’s awe-inspiring fan art has us in celebratory mood.

That’s right, it’s the holiday season and Gamer Claus (that’s me) is handing out CODES! CODES! CODES! to all the boys and girls across the globe. For 12 days beginning Tuesday, December 14, and ending Saturday, December 25, we’ll be giving out codes to more than a dozen games, culminating with retail copies of Rockstar’s Undead Nightmare.

Check out Blake Packard’s amazing fan art and our poem for some not-so-subtle clues as to what games are involved. Each day on Twitter I’ll announce which title is being given out…oh, and for those that decipher the poem, the games aren’t necessarily in that order.

So how do you win? Well, there are a few ways to earn entries:

— Scroll on down and leave a comment telling us what you think of Blake’s artwork. That’s one entry. Also, if you’d like to have Blake’s masterpiece as your wallpaper you can download it here or for more info visit his website by clicking here.

— Follow us @VideoGamerRob on Twitter. That’s one entry, but we’ll also be doing some code drops so make sure you’re following!

— Refer a friend to follow us. Have them post “Hey @VideoGamerRob, give (@Your Twitter Name) an extra entry!” and I’ll do just that. That’s one entry per referral up to three total entries.

Make sure you remember to tell us what you’ve done in your comment below to ensure your entries are logged.

Also, keep an eye on our Twitter account for chances to earn BONUS entries for specific titles as well as to-be-announced incentives from developers to win MORE stuff.

In closing, let me just wish good luck to everyone and happy holidays from all of us here at RotoRob!

By Herija Green
This entry was posted on Monday, December 13th, 2010 at 12:02 am and is filed under Contests, Herija Green, Video Game Reviews. You can follow any responses to this entry through the RSS 2.0 feed. Responses are currently closed, but you can trackback from your own site.