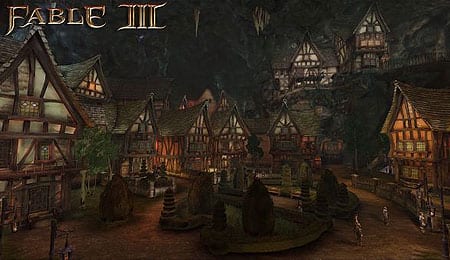 The subterranean village of Understone has never known sunlight. Sounds like Buffalo.

Although Fable III has several available add-ons to download, the recently released Understone Quest Pack is the first DLC that expands the game’s narrative in any way. No one will be confusing this as the second coming of Minerva’s Den in terms of content, but it does add three new quests (well, more accurately one new quest and two new repeatable mini games) along with a handful of weapons that are delivered to the sanctuary as gifts.

The Wheel of Misfortune, as seen in Reaver’s mansion during the main game, is now available to be replayed as often as you’d like. You once again battle through the various rooms, though this time you’re looking for points. Each kill increases your multiplier, but if you’re hit, it resets to one. At the end of six turns, your overall score is tallied and you receive a prize based on how well you did. Assuming you’re already king (or queen) you should have little trouble scoring huge the very first time.

A familiar distraction from Fable II is also brought back in the form of a shooting range. It seems that the bandits you throttled early in the main game have reinvented themselves and are now looking to attract tourists to their once-feared camp, which includes the addition of a gun range. Hit enough targets and you’ll earn better prizes. To me, manually aiming has never been one of Fable’s strong suits so I’m not a huge fan of this mini game, though it does offer some enticing rewards.

For most, the primary draw will be a new quest entitled “The Voice.” Triggered in Bowerstone Industrial, this mission has you investigating an underground city being controlled by a mysterious voice. The payoff is interesting and offers one of Fable III’s patented moral dilemmas at its conclusion, but the time spent getting there is both brief (less than half an hour) and largely forgettable.

The majority of your time is spent traveling down a linear path and disposing of the underground village’s automated defenses — consisting of previously encountered foes like undead wolves and Hobbes. Eventually all this combat ends in a boss fight against a brand new enemy. It looks pretty cool, but like the Wheel of Misfortune, if you’ve already beaten the game you’re going to be strong enough to simply steamroll right over it.

While not bad, the Understone Quest Pack comes up short in comparison to Fable II’s initial installment of DLC, Knothole Island, even taking into account that it checks in a bit cheaper at 400 MS points. Those that are itching to spend more time in Albion can pull the trigger, but others may prefer to wait for a longer, more challenging opportunity to revisit the world of Fable III.